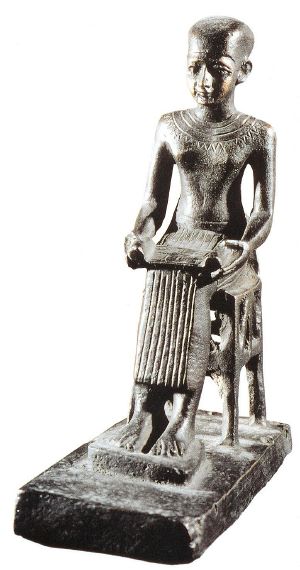 Statuette of Egyptian polymath Imhotep in the Louvre

A polymath is a person with broad knowledge or learning. Renaissance Man and (less commonly) Homo Universalis are related terms to describe a person who is well educated, or who excels, in a wide variety of subjects or fields. It is based on the Humanistic view of human beings as the center of the universe, unlimited in their capacity. The ideal person, therefore, in this view is one who attains all knowledge and develops all their abilities to the greatest extent, abilities which should encompass the full spectrum of human nature.

The ideal of the polymath Renaissance Man is embodied in the Italian Leon Battista Alberti, an accomplished architect, painter, classicist, poet, mathematician, and horseman, and Leonardo da Vinci, renowned in fields as diverse as art, science, invention, music, and writing.

Today, the ever continuing growth of knowledge has led to a situation where it is next to impossible for any single person to attain a complete knowledge and the ideal is now often regarded as a person expert in one field but with a sufficiently broad base to network effectively with experts in other fields. Also, studies of intelligence have revealed that a single, unitary intelligence is not adequate to account for all human intellect. Instead, the idea of multiple intelligences has gained ground, in which there are various types of intelligence, such as linguistic, logical-mathematical, spatial, bodily-kinesthetic, musical, and so forth, with different people displaying differing levels of each type. In this view, the ideal is to develop one's own unique talents and abilities to the fullest, without needing to be an expert in all areas.

A polymath (Greek polymathēs, πολυμαθής, "having learned much")[1] is defined as a person with encyclopedic, broad, or varied knowledge or learning.[2][3] It especially means that the person's knowledge is not restricted to one subject area. The term is used rarely enough to be included in dictionaries of obscure words.[4]

Renaissance Man (a term first recorded in written English in the early twentieth century)[5] is a related term to describe a person who is well educated, or who excels, in a wide variety of subjects or fields.[6]

This ideal developed in Renaissance Italy from the notion expressed by one of its most accomplished representatives, Leon Battista Alberti (1404–1472), that “a man can do all things if he will.” It embodied the basic tenets of Renaissance Humanism, which considered man the center of the universe, limitless in his capacities for development, and led to the notion that men should try to embrace all knowledge and develop their own capacities as fully as possible. Thus the gifted men of the Renaissance sought to develop skills in all areas of knowledge, in physical development, in social accomplishments, and in the arts. 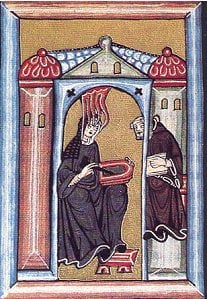 Hildegard of Bingen, a medieval polymath, shown dictating to her scribe in an illumination from Liber Scivias

Other similar terms are Homo universalis and Uomo Universale, which in Latin and Italian, respectively, translate as "universal person" or "universal man." These expressions derived from the ideal in Renaissance Humanism that it was possible to acquire a universal learning[6] in order to develop one's potential, (covering both the arts and the sciences[7] and without necessarily restricting this learning to the academic fields). Further, the scope of learning was much narrower so gaining a command of the known accumulated knowledge was more feasible than today.

When someone is called a Renaissance Man today, it is meant that he does not just have broad interests or a superficial knowledge of several fields, but rather that his knowledge is profound, and often that he also has proficiency or accomplishments[8] in (at least some of) these fields, and in some cases even at a level comparable to the proficiency or the accomplishments of an expert.[9] The related term Generalist[6] is often used to contrast this general approach to knowledge to that of the specialist.

The term Universal Genius is also used, taking Leonardo da Vinci as a prime example, especially when a Renaissance man has made historical or lasting contributions in at least one of the fields in which he was actively involved and when he had a universality of approach. Despite the existence of this term, a polymath may not necessarily be classed as a genius; and certainly a genius may not display the breadth of knowledge to qualify as a polymath. Albert Einstein and Marie Curie are examples of people widely viewed as geniuses, but who are not generally considered as polymaths.

According to the Oxford English Dictionary, the words "polymath" and polyhistor mean practically the same; "the classical Latin word polyhistor was used exclusively, and the Greek word frequently, of Alexander Polyhistor," but polymathist appeared later, and then polymath. Thus today, regardless of any differentiation they may have had when originally coined, they are often taken to mean the same thing.

In Britain, phrases such as polymath sportsman, sporting polymath, or simply "polymath" are occasionally used in a restricted sense to refer to athletes that have performed at a high level in several very different sports.

The expression "Renaissance man" today commonly implies only intellectual or scholastic proficiency and knowledge and not necessarily the more universal sense of "learning" implied by the Renaissance Humanism. It is important to note, however, that some dictionaries use the term Renaissance man as roughly synonym of "polymath" in the first meaning, to describe someone versatile with many interests or talents,[10] while others recognize a meaning which is restricted to the Renaissance era and more closely related to the Renaissance ideals.

During the Renaissance, the ideal of Renaissance humanism included the acquisition of almost all available important knowledge. At that time, several universal geniuses seem to have come close to that ideal, with actual achievements in multiple fields. With the passage of time however, "universal learning" has begun to appear ever more self-contradictory. For example, a famous dispute between "Jacob Burckhardt (whose Die Kultur der Renaissance in Italien of 1860 established Alberti as the prototype of the Renaissance Man) and Julius von Schlosser (whose Die Kunstliteratur of 1924 expresses discontent with Burckhardt's assessments on several counts)" deals with the issue of whether Alberti was indeed a dilettante or an actual Universal Man; while an 1863 article about rhetoric said, for instance: "an universal genius is not likely to attain to distinction and to eminence in any thing. To achieve her best results, and to produce her most matured fruit, Genius must bend all her energies in one direction; strive for one object; keep her brain and hand upon one desired purpose and aim."[11]

Since it is considered extremely difficult to genuinely acquire an encyclopaedic knowledge, and even more to be proficient in several fields at the level of an expert, not to mention to achieve excellence or recognition in multiple fields, the word polymath may also be used, often ironically, with a potentially negative connotation as well. Under this connotation, by sacrificing depth for breadth, the polymath becomes a "jack of all trades, master of none." For many specialists, in the context of today's hyperspecialization, the ideal of a Renaissance man is judged to be an anachronism, since it is not uncommon that a specialist can barely dominate the accumulated knowledge of more than just one restricted subfield in his whole life. Many fields of interest take years of single-minded devotion to achieve expertise, often requiring starting at an early age.

In addition, today, expertise is often associated with documents, certifications, diplomas, and degrees and a person who has an abundance of these is often perceived as having more education than practical "working" experience. However, true expertise may require practical familiarity that may be inaccessible to someone who has little or no actual experience in the field or who was not born and raised in the relevant culture. In many such cases, it is realistically possible to achieve only knowledge of theory if not practical experience. For example, on a safari, a jungle native will be a more effective guide than an American scientist who may be educated in the theories of jungle survival but did not grow up acquiring his knowledge the hard way.

Today it is generally considered that the specialist's understanding of knowledge is too narrow and that a synthetic comprehension of different fields is unavailable to him. What is much more common today than the universal approach to knowledge from a single polymath is the multidisciplinary approach to knowledge, which derives from several experts in different fields working together to pool their knowledge and abilities.

Most of the historical figures considered polymaths would most likely not be so regarded today based on the level of knowledge that they possessed. Much of their knowledge was basic and purely theoretical. For example, a gentleman educated in various fields such as math, history, literature, art, and science during the eighteenth or nineteenth centuries may be only the equivalent of an average modern person with a secondary school education. In ancient times, an expert on medicine may be the equivalent of knowing basic modern first aid. In contrast to modern times, knowledge was also condensed and comprehensive information on a particular field could often be found in single volumes or texts.

Caution is necessary when interpreting the word "polymath" since there is always ambiguity regarding what the word denotes. Nevertheless, there are a number of scholars who are recognized as polymaths and/or Renaissance men; some examples follow. 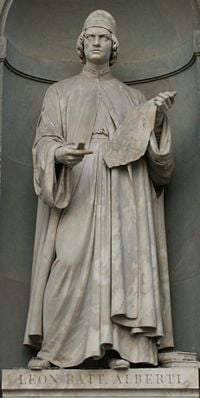 The following people have been described as "polymaths" by several sources—fulfilling the primary definition of the term—although there may not be expert consensus that each is a prime example in the secondary meaning, as "renaissance men" and "universal geniuses." 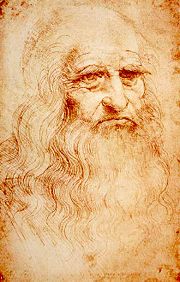 Leonardo da Vinci is regarded in many Western cultures as the archetypal "Renaissance Man".

The following people represent prime examples of "Renaissance Men" and "universal geniuses," so to say "polymaths" in the strictest interpretation of the secondary meaning of the word. The list also includes some of the Hakeem of the Islamic Golden Age (also known as the "Islamic Renaissance"), who are considered equivalent to the Renaissance Men of the European Renaissance era.