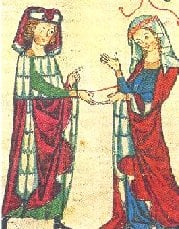 A madrigal is a setting for two or more voices of a secular text, often in Italian. The madrigal has its origins in the frottola, and was also influenced by the motet and the French chanson of the Renaissance. It is related mostly by name alone to the Italian trecento madrigal of the late thirteenth and fourteenth centuries; those madrigals were settings for two or three voices without accompaniment, or with instruments possibly doubling the vocal lines. The madrigal was a piece which was set to a love poem with word-painting and unexpected harmonies to attract the listener's attention. The distribution of such artistic love songs through madrigals demonstrated the importance of true love and that living for the sake of others was a core value in the Renaissance era.

Its rise started with the Primo libro di Madrigali of Philippe Verdelot, published in 1533 in Venice, which was the first book of identifiable madrigals. This publication was a great success and the form spread rapidly, first in Italy and up to the end of the century to several other countries in Europe. Especially in England the madrigal was highly appreciated after the publication of Nicholas Yonge's Musica Transalpina in 1588, a collection of Italian madrigals with translated texts which started a madrigal culture of its own. The madrigal had a much longer life in England than in the rest of Europe: composers continued to produce works of astonishing quality even after the form had gone out of fashion on the Continent (see English Madrigal School).

The practice of emotional "imitation" can be found in the early madrigals of the Renaissance. As music historian Richard Taruskin observes, the madrigals of the middle part of the sixteenth century "were hotbeds of musical radicalism and experimentation" as musical devices such as dissonance and chromaticism were often utilized to express the poetics of a particular text. Composers of madrigals would justify the use of unconventional harmonic or melodic ideas to support the imitative aspect of the their musical settings of texts. The Italian theorist and scholar, Geoseffo Zarlino (1517-1590) was at first an enthusiastic supporter of the so-called "madrigalisms," but later in his life came to reject the practice feeling that composers had become too literal and far too indiscriminate in their use of this particular technique.

Nevertheless, composers became increasingly inventive in their use of these "madrigalisms," in which melodic and harmonic devices were contextualized to a particular word in order to express its meaning. Setting a riso (smile) to a passage of quick, running notes which imitate laughter, or ospiro (sigh) to a note which falls to the note below two several examples of this invention. Also known as "word-painting," this invention can be found not only in madrigals but in other vocal music of the Renaissance.

English composer Thomas Morley (1557 or 1558-1602) formally dealt with such question in his treatise, Plaine and Easie Introduction to Practicall Musicke, published in 1597. Here, Morley put forth the following assertion regarding assigning a musical imitation to a text or libretto.

Morley writes: "It now followeth to show how to dispose your music according to the nature of the words which you are therein to express, as whatsoever matter it be which you have in hand such a kind of music must you frame to it. You must therefore, if you have any grave matter, apply a grave kind of music to it, if a merry subject you must make your music also merry, for it will be a great absurdity to use a sad harmony to a merry matter or a merry harmony to to a sad, lamentable, or tragic (text)."

This attitude would lead to the predominant attitude of the Baroque era, in which music was increasingly becoming a mode of emotional expression. A defining characteristic of music of the Baroque era was that composers became increasingly concerned with human emotions ("passions and affections"), and created music to "imitate" these emotions through tonal organization. Looking to the writings of Descartes and Sauveur who, in their investigation of man's psychological makeup, began to "objectify" certain emotions, Baroque composers developed the practice of consciously expressing specific emotions through musical means.

Morley's own madrigals are predominately light, quick-moving and easily singable, like his well-known "Now is the Month of Maying." He took the aspects of Italian style that suited his personality and anglicised them. Other composers of the English Madrigal School, for instance Thomas Weelkes and John Wilbye, were to write madrigals in a more serious or sombre vein. The most important of the late madrigalists are Luca Marenzio (1553-1599), Carlo Gesualdo (1560-1613) and Claudio Monteverdi (c. 1567-1643) who integrated in 1605 the basso continuo into the form and later composed the book Madrigali guerrieri et amorosi (1638) (Madrigals of War and Love), which is, however, an example of the early Baroque madrigal; some of the compositions in this book bear little relation to the a cappella madrigals of the previous century.

Nowadays, madrigals are often sung by high school or college madrigal choirs often in the context of a madrigal dinner which may also include a play, Renaissance costumes, and instrumental chamber music.

Importance of the Madrigal

The madrigal was the most important secular form of music of its time. It bloomed especially in the second half of the sixteenth century, losing its importance by the third decade of the seventeenth century, when it vanished through the rise of newer secular forms as the opera and merged with the cantata and the dialogue.

Some 60 madrigals of the English School are published in The Oxford Book of English Madrigals.

The madrigal was a secular vocal music which often used word-painting and unusual harmonies. Word-painting had not been used very often until the time of the Renaissance era. Word-painting was a musical exemplification of the text and its use through madrigals influenced many composers to create compositions with street cries or the imitations of natural sounds to further enhance the text of the piece. The piece, "La Guerre" (The War) by Clement Janequin, a French Renaissance composer, followed the influences from madrigalian techniques to create a composition which imitated battle sounds and fanfares to give more realism to his composition. The unusual harmonies were also an accompaniment to the word-painting during a time when Italian poetry was very popular and many composers hoped to create unique sounds to further exemplify their translation of a scenario or environment. Carlo Gesualdo, an Italian Renaissance composer and a murderer of his wife and her lover, wrote many madrigals with unusual harmonies to mirror his emotional state and actions. An example is Gesualdo's "Moro lasso al mio duolo."