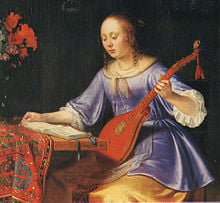 Thomas Morley (1557 or 1558 – October 1602) was an English composer, theorist, editor and organist of the Renaissance, and the foremost member of the English Madrigal School. He was the most famous writer of secular music in Elizabethan England, and the composer of the only surviving contemporary settings of verse by Shakespeare. Morley's madrigals, which were loosely based on the Italian madrigal form, became an important secular vocal music in England due to his ease of melodic writing, which he generously taught to others in a treatise on singing and composing.

Morley was one of the first composers of madrigals to utilize the practice of musical "imitation" to express emotionally the poetic narrative of a given text. This practice would eventually influence composers of the Baroque era in their use of musical components such as melody and harmony to express specific meanings or affectations in their works.

Morley was born in Norwich, in East Anglia, the son of a brewer. Most likely he was a singer in the local cathedral from his boyhood, and he became master of choristers there in 1583. However, Morley evidently spent some time away from East Anglia, for he later referred to the great Elizabethan composer of sacred music, William Byrd, as his teacher. While the dates he studied with Byrd are not known, they were most likely in the early 1570s. In 1588 he received his bachelor's degree from Oxford, and shortly thereafter was employed as organist at St. Paul's church in London.

It has been speculated that in his youth Morley converted to Roman Catholicism while under the tutelage of his mentor, Byrd. However, by 1591 he had defected from the church, and acted as an espionage agent among English Roman Catholics in the Netherlands.

Chronologically, Morley's compositions can be divided in two distinct styles. While still a pupil of William Byrd, his early works reflect the English style of polyphonic writing. From the 1590s his music began to exhibit a mastery of the Italian madrigal style that is characterized by a more direct expressiveness, lighter, jaunty rhythms, and textural clarity.

In 1588 Nicholas Yonge published his Musica transalpina, the collection of Italian madrigals fitted with English texts, which touched off the explosive and colorful vogue for madrigal composition in England. Morley evidently found his compositional direction at this time, and shortly afterwards began publishing his own collections of madrigals (11 in all).

Morley lived for a time in the same parish as Shakespeare, and a connection between the two has been long speculated, though never proven. His famous setting of "It was a lover and his lass" from As You Like It has never been established as having been used in a contemporary performance of a Shakespeare play, though the possibility, even the probability, that it was is obvious. Morley was highly placed by the mid-1590s and would have had easy access to the theatrical community. At this time there was, as there is now, a close connection between prominent actors and musicians; and the artistic community was much smaller in those days than it is today. 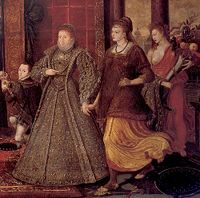 Elizabeth ushers in Peace and Plenty. Detail from the Family of Henry VIII: An Allegory of the Tudor Succession, c.1572, attributed to Lucas de Heere.

A defining characteristic of music of the Baroque era was that composers became increasingly concerned with human emotions ("passions and affections"), and created music to "imitate" these emotions through tonal organization. Looking to the writings of Descartes and Sauveur who, in their investigation of man's psychological makeup, began to "objectify" certain emotions, Baroque composers developed the practice of consciously expressing specific emotions through musical means.

The practice of emotional "imitation" can be found in the early madrigals of the Renaissance. As music historian Richard Taruskin observes, the madrigals of the middle part of the sixteenth century "were hotbeds of musical radicalism and experimentation" as musical devices such as dissonance and chromaticism were often utilized to express the poetics of a particular text. Composers of madrigals would justify the use of unconventional harmonic or melodic ideas to support the imitative aspect of the their musical settings of texts. The Italian theorist and scholar, Geoseffo Zarlino (1517-1590) was at first an enthusiastic supporter of the so-called "madrigalisms," but later in his life came to reject the practice feeling that composers had become too literal and far too indiscriminate in their use of this particular technique.

Nevertheless, composers became increasingly inventive in their use of these "madrigalisms," in which melodic and harmonic devices were contextualized to a particular word in order to express its meaning. Setting a riso (smile) to a passage of quick, running notes which imitate laughter, or ospiro (sigh) to a note which falls to the note below two several examples of this invention.

Known as "word-painting," this invention can be found not only in madrigals but in other vocal music of the Renaissance. Among the most important of the late madrigalists include Luca Marenzio, Carlo Gesualdo, and Claudio Monteverdi, who integrated in 1605 the basso continuo into the form and later composed the book Madrigali guerrieri et amorosi (1638) (Madrigals of War and Love), which is an example of the early Baroque madrigal. Some of the compositions in this book bear little relation to the a cappella madrigals of the previous century.

Morley formally dealt with such questions in his treatise, Plaine and Easie Introduction to Practicall Musicke, published in 1597. Here, Morley put forth the following assertion regarding assigning a musical imitation to a text or libretto:

"It now followeth to show how to dispose your music according to the nature of the words which you are therein to express, as whatsoever matter it be which you have in hand such a kind of music must you frame to it. You must therefore, if you have any grave matter, apply a grave kind of music to it, if a merry subject you must make your music also merry, for it will be a great absurdity to use a sad harmony to a merry matter or a merry harmony to a sad, lamentable, or tragic (text)."

This attitude would lead to the predominant trend of the Baroque era, in which music was increasingly becoming a mode of emotional expression.

Morley's own madrigals are predominately light, quick-moving and easily singable, like his well-known "Now is the Month of Maying." He took the aspects of Italian style that suited his personality and anglicised them. Other composers of the English Madrigal School, for instance Thomas Weelkes and John Wilbye, were to write madrigals in a more serious or somber vein. 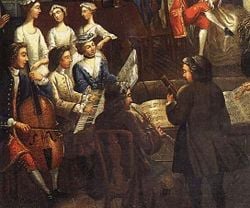 Baroque musicians in a chamber ensemble

In addition to his madrigals, Morley wrote instrumental music, including keyboard music, some of which has been preserved in the Fitzwilliam Virginal Book. He also composed music for the uniquely English ensemble of two viols, flute, lute, cittern and bandora, notably as published in 1599 in The First Booke of Consort Lessons, made by diuers exquisite Authors, for six Instruments to play together, the Treble Lute, the Pandora, the Cittern, the Base-Violl, the Flute & Treble-Violl.

While Morley attempted to imitate the spirit of Byrd in some of his early sacred works, it was in the form of the madrigal that he made his principal contribution to music history. His work in the genre has remained in the repertory to the present day, and shows a wider variety of emotional color, form and technique than anything by other composers of the period.

Morley's Plaine and Easie Introduction to Practicall Musicke remained popular for almost 200 years after its author's death, and remains an important reference for information about sixteenth century composition and performance.