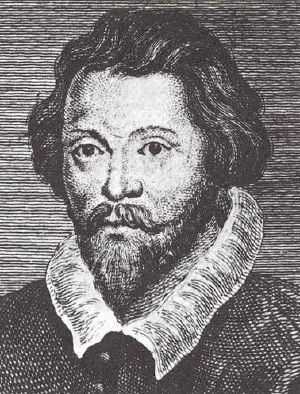 William Byrd (c. 1540 – July 4, 1623) was one of the most celebrated English composers of the Renaissance. His entire life was marked by contradictions, and as a true Renaissance man, he cannot be easily categorized. He lived until well into the seventeenth century without writing music in the new Baroque fashion, but his superbly constructed keyboard works marked the beginning of the Baroque music organ and harpsichord styles.

A recently-discovered legal document claims that he was born in 1540 (or perhaps late in 1539), not in 1543 as some biographers had thought.

Like so many gifted musicians in Renaissance Europe, Byrd began his career at a very early age. He almost certainly sang in the Chapel Royal during Mary Tudor's reign (1553–1558), "bred up to music under Thomas Tallis." This places him in the best choir in England during his impressionable teenage years, alongside the finest musicians of his day.

A royal influence on Byrd was Queen Mary, who spent her brief reign reacting to the excesses of Protestant austerity under her predecessor Edward VI of England. One of the more pleasant aspects of this was her taste for elaborate Latin church music. Byrd seems to have thrived in this exuberant, creative atmosphere. One manuscript from Mary's chapel includes a musical setting of a long psalm for Vespers, with eight verses each by leading court composers William Mundy and John Sheppard, and four verses by the young Byrd. They must have recognized his talent and invited him to work with them.

Under Elizabeth and James

He was 18 years old when Mary died and her younger Protestant sister, Queen Elizabeth I of England, succeeded her. The sudden change may well have driven him away from court. He shows up again in his mid-twenties as organist and choirmaster of Lincoln Cathedral, being named to the position on February 27, 1562/3 and living at 6 Minster Yard in the cathedral close. There the clergy apparently had to reprimand him for playing at excessive length during services, although he did continue to write music specifically to be played at Lincoln even after his move to London.

After being named a gentleman of the Chapel Royal in 1572, a well-paying job with considerable privileges attached to it, he moved back to London. He worked there as a singer, composer and organist for more than two decades. Just after his appointment, he and Tallis obtained a joint printing license from Queen Elizabeth. He published three collections of Latin motets or Cantiones Sacrae, one (in 1575) with the collaboration of his teacher and two (in 1589 and 1591) by himself after the older man had died. Alongside these, he brought out two substantial anthologies of music in English, Psalmes, Sonets and Songs in 1588 and Songs of Sundrie Natures in 1589. He also wrote a large amount of Anglican church music for the Chapel Royal, including such masterpieces as the ten-voice Great Service and well-known anthems such as Sing Joyfully.

In 1591, he arranged for the transcription of many of his finest keyboard pieces to form a collection dedicated to a member of the Nevill family, entitled My Ladye Nevells Booke, one of the most important anthologies of Renaissance keyboard music. In 1593, he moved with his family to the small village of Stondon Massey in Essex, and spent the remaining thirty years of his life there, devoting himself more and more to music for the Roman liturgy. He published his three famous settings of the Mass Ordinary between 1592 and 1595, and followed them in 1605 and 1607 with his two books of Gradualia, an elaborate year-long musical cycle. He contributed eight marvelous pieces to the first printed collection of music in England, Parthenia, published around 1611. He died on July 4, 1623, and is buried in an unmarked grave in the Stondon churchyard.

Effects of the Reformation on his career

Byrd's life is interesting because of his Roman Catholic Church sympathies combined with his work in the court of the Anglican Queen Elizabeth I of England (consider, for example, the “Credo of the Mass for Three Voices,” where winding counterpoint joins together for an exultant repetition of "catholicam" before drifting apart again). He composed much music, if intermittently, for the Roman Catholic liturgy, particularly in his later years; the two volumes of Gradualia constitute a prime example. Possibly as a result of this, he did not receive widespread recognition in his lifetime, but was very well respected among the Roman Catholic gentry. In the anti-Catholic frenzy following the 1605 Gunpowder Plot, the first volume of the Gradualia, printed by Thomas East in 1605, was banned in England under penalty of imprisonment, as indeed was all his Catholic music. Yet, his Anglican music&mdash, such as the Short Service and the Responses&mdash, have been sung in English cathedrals uninterrupted for the past four centuries.

Every stage of Byrd's musical career was affected by the political and religious controversies of his day. When a law was passed in 1534 establishing Henry VIII of England as “the only Supreme Head in earth of the Church of England,” liturgy and church music took on a new importance. In such volatile times, the outward practices of worship were often the only touchstone for inward loyalty—and in the new English church, disloyalty to the established religion was also disloyalty to the state. This point was not lost on the obsessively political Tudor regime. Lex orandi or lex credendi—how people worship reflects, even determines, what they believe—was a theological commonplace of the era, and public prayer was, as it had been for centuries in pre-Reformation England, inextricably linked with music-making. One of the first steps taken by the Reformers was the revision of all books of worship and the establishment of a new, simplified musical style. By the time Byrd joined the Chapel Royal in the 1570s, the rules had relaxed somewhat, and he could produce elaborate works for what was still the best-funded and most famous choir in the country. Even as he won fame for his Anglican church music, he was writing bitter Latin motets, many of them publicly printed in his books of Cantiones, about the plight of the English Catholic community. At some point, he tired of compromise and left the court, keeping his position at the chapel in absentia. He never returned to live in London. He continued to write secular songs, madrigals, and keyboard pieces until the end of his life, but his later church music, composed during the years in Essex, is exclusively Latin.

The three masses and the two books of Gradualia, published over fifteen years, were Byrd's major contribution to the Roman rite. These were written for an intimate and small group of skilled amateurs (which included women, according to contemporary accounts) and heard by a small congregation. Although such worship could be dangerous—even a capital offense in some cases—Byrd went further than merely providing music. There are many records of his participation in illegal services. A Society of Jesus (Jesuit) missionary describes a country house in Berkshire in 1586:

The gentleman was also a skilled musician, and had an organ and other musical instruments and choristers, male and female, members of his household. During these days it was just as if we were celebrating an uninterrupted Octave of some great feast. Mr. Byrd, the very famous English musician and organist, was among the company....

In view of such events, it is astonishing that he was allowed to live as a free man, much less keep his office in the Chapel Royal and the benefices associated with it. Shortly after the Gunpowder Plot was uncovered in November 1605, an unfortunate traveler was arrested in a London pub in possession of "certain papistical books written by William Byrd, and dedicated to Lord Henry Howard, Earl of Northampton"—an unmistakable reference to the first set of Gradualia. The man was thrown into Newgate Prison, one of the most notorious prisons in England. Byrd and his family suffered no such treatment (though his wife's servant was imprisoned on two occasions), but court records show him involved in endless lawsuits, mostly over his right to own property confiscated from another Catholic, and paying heavy fines. The reputation he had built as a young man in London, and the patronage of the queen, must have helped him through his later years.

Artists often claimed a sort of vocational immunity to the controversies of their age—John Taverner, implicated in the radical Oxford Protestant movement of the late 1520s, escaped a heresy trial with the plea that he was “but a musician”—but the simple act of creating religious art put them in the center of the fray. Byrd was talented and fortunate enough to continue his work, and to gain the esteem of nearly all his contemporaries. Henry Peacham reflected the public opinion when he wrote, just a few months before the composer's death, in his Compleat Gentleman:

For motets and music of piety and devotion, as well for the honour of our nation as the merit of the man, I prefer above all our Phoenix, Master William Byrd.