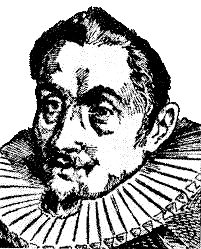 Hans Leo Haßler (baptized October 26, 1564 – June 8, 1612) was a German composer and organist of the late Renaissance music and early Baroque music eras who excelled in the categories of both sacred and secular music. Even though the emphasis was on the sacred music of the Venetian School, Hassler maintained that service to the community was in the conscientious rendering of secular music, and his output reflected both genres. He was born in Nuremberg and died in Frankfurt am Main.

Hassler most likely studied music as a boy with his father, who was an organist. In 1584, like many German composers of the time, he went to Italy to continue his studies; he arrived in Venice during the peak of activity of the Venetian school—the composers who wrote in the resplendent Venetian polychoral style, which was soon to become popular outside of its native city. Hassler was already familiar with some of this music, as numerous prints had circulated in Germany due to the interest of Leonhard Lechner, who was associated with Orlandus Lassus in Munich.

While in Venice, Hassler became friends with Giovanni Gabrieli; together they studied with Andrea Gabrieli, Giovanni's uncle.

Hassler returned to Germany in 1586, moving to Augsburg where he served as an organist to Octavian II Fugger, a nobleman there. The Augsburg years were extremely creative for him; in addition he became well-known as a composer and organist at this time, though his influence was limited because he was a Protestant in an area which was still heavily Roman Catholic. Later he moved to Nuremberg, and then to Ulm; around this time he acquired tuberculosis, which proved to be fatal, although he did have a brief stint as chapel organist in Dresden, where he composed his last works. After he died, Michael Praetorius and Heinrich Schütz were appointed in his place.

Hassler was one of the first to bring the innovations of the Venetian style across the Alps. While musicians of the stature of Lassus had been working in Germany for years, they represented the older school, the prima pratica, the fully developed and refined Renaissance style of polyphony; in Italy new trends were emerging which were to define what was later called the Baroque era. Musicians such as Hassler, and later Schütz, carried the concertato style, the polychoral idea, and the freely emotional expression of the Venetians into the German culture, creating the first and most important Baroque development outside of Italy.

Hassler's sacred music is both for the Roman Catholic church and the Lutheran. Stylistically, his earlier music is more progressive than his later: he uses polychoral techniques, textural contrasts, and occasional chromaticism in the music he wrote after coming back from Italy; but most of his later religious music is conservative, using linear polyphony in the manner of Palestrina. His secular music— madrigals, canzonette, and songs among the vocal, and ricercars, canzonas, introits, and toccatas among the instrumental—show many of the advanced techniques of the Gabrielis in Italy, but with a somewhat more restrained character, and always attentive to craftsmanship and beauty of sound.