Busan Metropolitan City, also known as Pusan (Pusan; 부산; 釜山), is the largest port city in the Republic of Korea. With a population of about 3.65 million, Busan is also South Korea's second largest metropolis, after Seoul. The densely populated city occupies 168 square miles (436 square km) in the narrow Nakdonggang valley, with mountains separating some of the various districts.

Busan became Korea’s first international port in 1876. Busan was the only city in Korea that was never taken by the North Korean Communists during the Korean War, when its population was more than doubled by an influx of refugees from the north. Busan was the host city of the 2002 Asian Games and APEC 2005. It was also one of the host cities for the 2002 FIFA World Cup, and is the center for international conventions in Korea. Administratively, it is designated as a Metropolitan City. On November 14, 2005, the city officially announced its bid to host the 2020 Summer Olympics Games.[1]

Geochilsan-guk existed in the second and third centuries as a chiefdom of Jinhan, a loose confederacy of chiefdoms that existed from around the first century B.C.E. to the fourth century C.E. in the southern Korean peninsula, to the east of the Nakdong River valley, Gyeongsang Province. It was absorbed by Silla and renamed Geochilsan-gun. The word Geochilsan means “rough mountain,” probably referring to Hwangnyeongsan, located at the center of the city.

The artifacts excavated from mounded burials at Bokcheon-dong indicate that a complex chiefdom ruled by powerful individuals was present in the Busan area just as the Three Kingdoms of Korea (삼국시대 ), Goguryeo, Baekje and Silla, which dominated the Korean peninsula and parts of Manchuria for much of the first millennium C.E.) were forming, c. 300-400 C.E.. The mounded burials of Bokcheon-dong were built along the top of a ridge that overlooks a wide area that makes up parts of modern-day Dongnae-gu and Yeonje-gu. Archaeologists excavated more than 250 iron weapons and ingots from Burial No. 38, a wooden chamber tomb at Bokcheon-dong.

In 757, Geochilsan-gun was again renamed Dongnae, which it is still called. During the Koryo dynasty (tenth to late fourteenth century), the city was named Pusanpo (“pu,” “kettle”; san, “mountain” [from the shape of the mountain behind it]; and po, “bay,” or “harbor”). 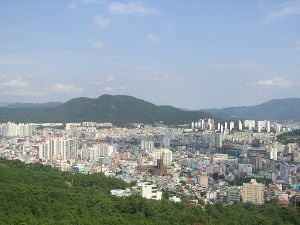 The city became a major port under the Chinese Empire. From the beginning of the fifteenth century, the Korean government designated Busan as a trading port with the Japanese and allowed their settlement. Other Japanese settlements in Ulsan and Jinhae diminished later, but the Busan settlement, called Waegwan at the time, continued until Japan invaded Korea in 1592. After the war, diplomatic relations with the new shogunate in Japan were established in 1607, and Busan Waegwan was permitted to be reconstructed. The Japanese settlement, though relocated into Choryang later, continued to exist until Korea was exposed to modern diplomacy in 1876, when the Koreans were compelled to sign a treaty opening Busan to Japanese trade and immigration. Busan, located on a deep, well-sheltered bay at the mouth of the Naktong River facing the Japanese islands of Tsushima, became the first international port in Korea. In 1883 it was opened to general foreign trade.

During the Japanese occupation, Busan developed into a hub trading port with Japan. Busan was the only city in Korea to adopt the steam tramway before electrification was introduced in 1924. The city developed into a modern port, with ferry service connecting the city with Shimonoseki, Japan; and rail lines from China and Russia terminating in Pusan.

The city’s population swelled with Koreans returning from overseas when Korea gained independence in 1945, and was more than doubled again by refugees from the north during the Korean War (1950-1953), when it became the temporary capital of the Republic of Korea. The first United States forces were flown to Pusan (Busan) in July, 1950, at the beginning of the Korean War. Busan is the only city in Korea that was never taken by the North Korean Communists during the Korean War. The United Nations troops were driven south to Incheon, near Busan, and established the "Pusan Perimeter" on July 31, 1950. On August 17-24, when Seoul was captured by North Korea, the capital of South Korea was moved to Busan. United Nations forces protected the city from air attack and channeled supplies through Busan to the front by rail. Since 1963, Busan, has been an independent metropolis with the status of a province, and has developed a strong urban character. Busan began construction on its first subway in 1980. The city contains a number of universities and colleges; landmarks include the Beomeo Temple.

The Port at Busan

Busan is now one of the world's busiest container ports and a major transshipment center. Since 1978, Busan has opened three container ports including Jaseungdae, Shinsundae and Gamman. Busan is renowned as one of the world's largest ports and can handle up to 6.44 million TEU shipping containers per year. The city is also the southern terminus of the main railroad line from Seoul, and now has an international airport.

The Busan-Jinhae Free Economic Zone Authority, one of two such administrations (the other in the harbor of Incheon), was created to continue the tradition of Busan's status as an international trading center. It now attracts ships from all over the globe and aspires to become a regional financial center. Currently, Busan is ranked internationally as the third largest seaport in terms of cargo volume and efficiency by the AAPA.

The port is divided by Yong-do (island), which is connected to the mainland by a drawbridge. The larger, eastern port is used for foreign trade and the smaller, western port for fishing.

Industries in Busan include shipbuilding and automobile, electric, iron, steel, ceramics, textile, chemical, paper, tires and various mechanical and other manufacturing plants, frozen seafood and the manufacture of fishing nets. Its plywood industry is the largest in Korea, and has produced significant exports since 1961. Fishing and agriculture are carried on chiefly for local consumption. There are shipyards and railway yards, and several thermal and hydroelectric power stations.

Nearby hot springs and coastal beaches have made Busan a popular resort city. Ancient temples are located near the mountains, and outside the city is a memorial cemetery for the United Nations soldiers who died during the Korean War.

Geumjeongsan to the west is a popular weekend hiking spot for Busan residents. To the north, the neighborhoods around Pusan National University (also known as PNU, which is one of the most highly-recognized national institutes of high education in Korea) have student theaters, cafes, bars and restaurants, as well as open-air cultural street performances on weekend nights. Tongdosa is one of the major three Buddhist temples in Korea. Another temple, Beomeosa, is also very important in Korean Buddhism.

Dongnae area is a traditional as well as wealthy residential area. Dongnae Oncheon is a natural spa area with many baths, tourist hotels, restaurants, clubs and shopping areas. Many restaurants in the area are famous for their family recipes. Chungnyeolsa is a Confucian shrine for soldiers who died during the eighteenth century battle against the Japanese at Dongnae castle. 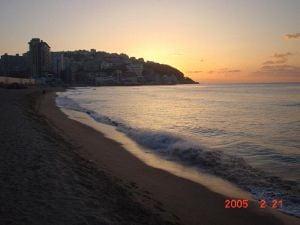 Busan is the so-called summer capital of Korea since it attracts tourists from all over the country to its six beaches. High class hotels and a carnival boardwalk line the Haeundae Beach district, which is generally regarded as one of the most beautiful beaches in Korea. Gwangalli Beach is famous for its cafes, bars, and restaurants along the beach. The area around Pukyong National University and Kyungsung University has many cafes, bars and restaurants attracting college students and youth.

Seomyeon is recognized as the new downtown with many cafes, bars, restaurants, shops and shopping centers.

The Gwangbok-dong and Nampo-dong areas form the old downtown with many cafes, bars, shops and restaurants. Some of the restaurants in the area are famous with family recipes passed down the generations. Jagalchi Market (near the very active port) is an area of narrow street stalls and is well known for its fish market. Taejongdae, is a natural park with magnificent cliffs facing the open sea on the island of Yeongdo.

The area titled as the "Foreigners' Shopping Street," but commonly referred to as "Texas Street" near the main docks, has many Russian businesses that cater to the local Russian population, as well as the crews of foreign ships. The area was originally known as the Foreigners' Street because many businesses were set up there during the 1940s and 1950s to cater to American soldiers in the area.

Since 1982, the city has been home to the Lotte Giants, who play in the Korean baseball league. In Korea, Busan is known as the capital of baseball and has a reputation for very enthusiastic baseball fans. 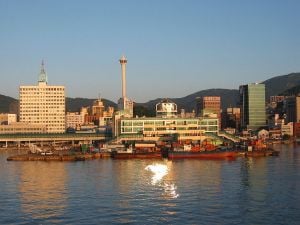 The city is also home to K-League soccer side Busan I'park, the Daewoo Unicorns, which was the strongest team during the 1990s in K-league.

Busan is also famous for the Pusan International Film Festival, or PIFF, which is the largest and best-known international film festival in Asia and annually attracts huge numbers of tourists from all over East Asia and the world. Busan also hosts an annual polar bear swimming competition in Haeundae Beach during the winter.

Busan continues to be an important educational, cultural and economic center for the nation. Its beautiful beaches, festivals and glittering nightlife make it a popular destination for many tourists. 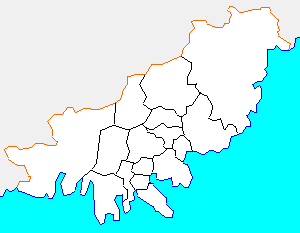 In 1957 Busan adopted a division system with the creation of 6 gu: Busanjin-gu, Dong-gu, Dongnae-gu, Jung-gu, Seo-gu, and Yeongdo-gu.

The Coastal Ferry Terminal (연안여객터미널) serves ferry services to many locations on Geoje Island as well as to Jeju City in Jeju-do.[2]

Ferries leaving from the International Ferry Terminal (국제여객터미널) on Busan Harbor Pier 1 connect Busan to the Japanese ports of Izuhara and Hitakatsu on Tsushima Island, as well as the cities of Shimonoseki, Fukuoka, and Osaka on Japan's mainland.[3]

Busan is served by Gimhae International Airport in the west.

Busan lies on a number of rail lines, of which the most important is the Gyeongbu Line which connects it to other major cities such as Seoul, Daejeon, and Daegu. All classes of trains run along the Gyeongbu Line, including the KTX trains which provide service to Seoul in approximately 150 minutes. The Gyeongbu Line terminates at Busan Station. Other lines include the Donghae Nambu Line.

Other institutes of higher education

Busan shares the title of sister city with several coastal cities or provinces across the world.[9]

The Port of Busan also has six sister ports.[10]