King Gongmin (공민왕 恭愍王1330 – 1374) ruled Goryeo (Korea) from 1351 until 1374. He was the second son of King Chungsuk( 충숙 忠肅王). In addition to his various Korean names, he bore the Mongolian name Bayàn Temür (伯顔帖木兒). Following a custom established after the Mongol invasion of Korea in 1238, Gongmin married a Mongol princess, Queen Noguk (노국대장공주; 魯國大長公主) and spent ten years as a political hostage at the Yuan Court in China before ascending the Goryeo throne in 1351. Soon after he became King, the Yuan dynasty crumbled, to be replaced by the Ming dynasty (明朝) in 1368. King Gongmin set about implementing political and social reforms that would establish Goryeo as an independent nation once again. He reclaimed the northern provinces of Korea from the Mongols, removed all pro-Mongol aristocrats and military officers from their positions, and attempted to reform the system of land ownership.

King Gongmin encountered stubborn resistance to his reforms from the entrenched officials and aristocrats who had prospered under the Mongols and did not want to relinquish their privileges. He became mentally unbalanced after the death of his wife, and was murdered in his bed in 1374 by a group of servants and companions. The Goryeo dynasty could not overcome its weaknesses, and was overthrown in 1392 by one of Gongmin’s generals, Yi Seonggye, who established the Joseon Dynasty. 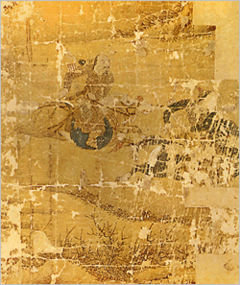 "Hunt in the Mountains of Heaven," a painting by King Gongmin.

The Goryeo Dynasty (고려왕조; 高麗王朝; Koryo kingdom) ruled the Korean peninsula from 935 to 1392. The Western name “Korea” is derived from the name Goryeo (Koryo). During the Goryeo kingdom, Korea began to develop a unique cultural tradition distinct from the rest of East Asia. Goryeo (Koryo) was founded in 918 by General Taejo Wang Geon (태조 왕건; Wang Kon; 王建), who overthrew the state of Later Koguryo, changed its name to Goryeo (Koryo), and established his capital at Songak (present-day Kaesong). When the kingdom of Silla surrendered to him in 935, and Later Paekche in 936, Wang Geon established a unified kingdom on the Korean peninsula.

During the reign of King Seongjong (Songjong r. 981–997) the old aristocratic tribal system was replaced with a centralized bureaucratic administration. Civil-service examinations were used to select the most qualified candidates for government offices, and to strengthen control over rural areas by bringing their elite into the central government. Confucianism determined the political structure of Goryeo, but Buddhism also exerted a powerful influence. The Tripitaka, the complete Buddhist canon, was published. The arts flourished, particularly ceramics, such as the well-known Goryeo (Koryo) celadon.

Goryeo (Koryo) maintained friendly relations with China and adopted its culture and political system, but experienced frequent conflicts with tribes on the northern frontier. In 1170, a coup d'état occurred, brought on by the unequal treatment given to military officials. During the ensuing political disorder, one of the generals, Ch'oe Ch'ung-hon (Choe Chung-heon; 최충헌; 崔忠獻), established a military regime that lasted from 1197 to 1258. The Ch'oe family, however, never usurped the throne and continued to rule behind the scenes.

From 1231 - 1273, Goryeo (Koryo) experienced six invasions by the Mongols. Many civilians died, and Goryeo became a tributary of the Mongol Yuan Dynasty ( 元朝) in China. Beginning with King Chungnyeol, Korean princes customarily married Mongol princesses and were sent to the Yuan Court, more or less as political hostages. Following this custom, King Gongmin was sent in 1341 to the Yuan court, where he married the Mongol princess Queen Noguk (노국대장공주; 魯國大長公主) and spent ten years before ascending to the Korean throne. By the mid-fourteenth century, however, Yuan was beginning to crumble, soon to be replaced by the Ming Dynasty( 明朝) in 1368.

With the disintegration in China of the Yuan dynasty, which had dominated the Korean peninsula since the Mongol invasions of Korea in 1238, Gongmin began efforts to reform the Goryeo government. His first act was to remove all pro-Mongol aristocrats and military officers from their positions. Disgruntled, they then formed a dissident faction that plotted an unsuccessful coup against the king. A high-ranking ex-official, Jo Il-sin, attempted to take over the government, but the rebellion was put down by general Choe Yeong (최영; 崔榮).

Between the 1250s and the 1270s, Mongols had annexed the northern provinces of Korea after the invasions and incorporated them into their empire as Ssangseong (쌍성총관부; 雙城摠管府; South Hamgyong) and Dongnyeong (동녕부; 東寧府; North Pyongan). During 1356, the Goryeo army retook these provinces, partly due to the defection of Yi Ja-chun ( 이자춘; 李子春), a minor Korean official in service of Mongols in Ssangseong, and his son Yi Seonggye ( 이성계; 李成桂). Generals Yi Seonggye (later the founder of the Joseon Dynasty) and Ji Yongsu also led a campaign into Liaoyang( 遼陽) (in southwestern Manchuria).

King Gongmin attempted to reform the system of land grants, which had broken down as the majority of Goryeo’s agricultural land was owned by officials favored by the Mongols, and a handful of landed gentry, and was worked by tenant farmers and bondsmen. However, because the officials who were supposed to implement his reforms were landowners themselves, they responded with opposition and subterfuge.

Another problem faced by King Gongmin was that the Wokou( 倭寇; Japanese pirates), who had been troubling the peninsula for some time, were no longer simple bandits, but had become well-organized military marauders raiding deep into the country. Gongmin called upon Generals Choe Yeong and Yi Seonggye to combat them.

Further disruptions were caused by the troops of the Chinese Red Turban Rebellion, which invaded Goryeo twice, in 1359 and 1361. In 1361, the Red Turban troops occupied Kaesong for a short period, then barely escaped from the advances of Generals Choe Yeong, Yi Seonggye, Jeong Se-Un, and Yi Bang-Sil.

During Gongmin’s reign, a Goryeo diplomat named Mun Ik-jom, who was stationed in China, managed to smuggle cotton seeds back into Goryeo, introducing them to the Korean peninsula for the first time.

Goryeo's entrenched bureaucracy never forgave King Gongmin for his reform efforts. They interpreted his policy of cutting all ties with the Yuan and establishing relations with Ming China as a direct threat to their status and feared that further attempts at reform might yet be made. Kaesong's deposed pro-Mongol faction battled to protect its position and hoped to renew ties with the Mongols who had helped them gain and keep their wealth.

The King’s first wife, the Mongolian Princess No Guk, had finally become pregnant after 16 years of marriage. She died in 1365, while giving birth to their stillborn child. Gongmin became disconsolate over the death of his queen and sank into a deep depression. He became indifferent to politics, and entrusted important responsibilities to his Prime Minister Plenipotentiary, the Buddhist monk Shin Don (신돈, 辛旽), while he spent hours at his wife’s grave, mumbling over a portrait that he himself had painted of her. However, in 1371, Shin Don was dismissed from his position after his political opponents accused him of treason.

In the depression after his wife's death, Gongmin surrounded himself with young men, and in 1374, some of them killed him as he slept. After Gongmin's death, a high-ranking official, Yi In-im, assumed control of the government. and enthroned the eleven-year-old King Ou on the grounds that King Gongmin had claimed to be the boy's father. Ou's mother had been a slave in the household of the monk Shindon. Gongmin had brought the boy to live in the palace as his son, but many believed that his father was really Shindon.

Gongmin had proclaimed himself an emperor as a part of the reforms he undertook in order to reinstate Goryeo's position as a nation independent of China, but due to the political situation in the time following his death he did not receive a temple name of an emperor.

Details of the King's Death

The details of King Gongmin’s reign and the circumstances surrounding his death are recorded in Goryusa, the history of the Joseon Dynasty, in several Books of King Gongmin. The account of his murder may have been colored by the fact that the Goryusa was intended to legitimize the succeeding dynasty by demonstrating the moral failures of the previous one, but there is no alternative historical record to counter the "Goryusa" account. According to an entry for the first day of the tenth lunar month in the twenty-first year of the reign of King Gongmin—in the forty-third volume of Goryusa, the sixth Book of King Gongmin—in 1372 King Gongmin formed an elite group of young men called the Jajewi (‘Noble Youth Guards’), selected from among the most promising sons of the nobility. Ostensibly, the Jajewi was organized so that Gongmin himself could instruct these young men and groom them as the next generation of loyal government ministers. However, the record goes on to recount that Gongmin had become mentally unbalanced after the death of his first wife, and though he had four consorts, he rarely visited them and was impotent. The members of Jajewi were selected, not for their virtues, but for their youthful beauty and perverted dispositions, to become the King’s intimate companions.

The record goes on to say that the King ordered the men of the Jajewi to have relations with his consorts, in order to produce a male child that he could claim as his own. When three of the consorts, Jung, He, and Sin refused and threatened to commit suicide if they were violated, the King personally took several of the Jajewi men, including Hong Ryun and Han An, to the chamber of Consort Ik and frightened her into complying by threatening her with his sword. After this, the men often went to her chamber at night under the pretext of fulfilling the King’s order.

It is written in the Life of Hong Ryoun (Hong Ryun) that two years later, on the night of the murder, the eunuch Choi Man-Seng (최만생) reported to King Gongmin that Consort Ik was in her fifth month of pregnancy. The King was greatly pleased by this, and asked who was the father. When he learned that it was Hong Ryoun, he told the eunuch that he would now have to kill him and the entire group of Jajewi men in order to keep the secret of her baby's paternity.

That same night, on the twenty-first day of the ninth lunar month in the twenty-third year of the reign of King Gongmin (1374 C.E.), at the royal palace in Songdo, the capital of the Kingdom of Goryo, several men entered the King’s private chamber in the middle of the night and butchered him with swords. Though at least three people shouted, "enemy has entered," the palace guards dared not make a move, and the royal servants refused to come out of their rooms. Immediately after the murder, a court eunuch named Yi Gangdal and the high ministers Gyung Bouheung, Yi Inim, and An Sagi, conducted an inquiry, discovered Choi Man-Seng (최만생) still wearing clothes stained with Gongmin's blood, and extracted a confession from him. He named five members of the elite Jajewi, including Hong Ryun, as his accomplices. All six were executed, their fathers put in prison, their children hanged, their families’ properties confiscated, and their brothers and uncles flogged and sent into exile. Mercy was shown only to the wives, who were allowed to live on as palace slaves. [1]