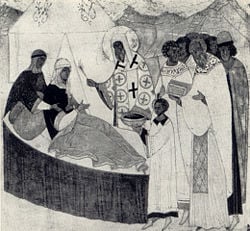 The Golden Horde (Turkish: Altın Ordu), also known as Kipchak Khanate or the Ulus of Jochi, was a Mongol state established in parts of present-day Russia, Ukraine, and Kazakhstan after the break up of the Mongol Empire in the 1240s. It lasted until 1440. At its height it was a flourishing commercial and trading enterprise extending stability to large areas of Russia.

The name "Golden Horde" referring to a sovereign state is a relatively modern innovation. The name is overlaid on historical references to the "Blue Horde "and "White Horde," which names at times are considered to refer to sovereign states and at other times to refer to the Mongol armies.

The name “Golden Horde” is believed to have come from the steppe color system for the cardinal directions: black = north, blue = east, red = south, white = west, and yellow (or gold) = center.

According to another version, the name was derived from a magnificent golden tent that Batu Khan established to mark a place of his future capital on the Volga River. Although much aired in the nineteenth-century books, this theory is now considered apocryphal.

There are no written records dated prior to seventeenth century (well after the destruction) that refer to the state as Golden Horde. Earlier documents allude to this polity as Ulus of Jochi.

Some scholars prefer to use an alternative name—Kipchak (or Qipchaq) Khanate—because various derivatives of Kipchak were also applied to this state in medieval documents. 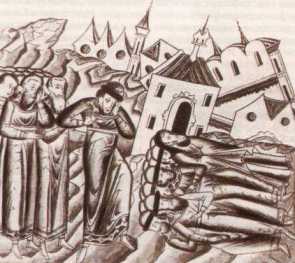 Destruction of Suzdal by the Mongol armies. From the medieval Russian annals

Prior to his death in 1227, Genghis Khan arranged for the Mongol Empire to be divided amongst his four sons, including Jochi, the eldest who died before Genghis Khan. Jochi's portion, the westernmost lands trodden by the Mongol hoof—then southern Russia—was divided between Jochi's sons, Batu Khan leader of the Blue Horde (West), and Orda Khan, leader of the White Horde (East).[1]

Batu subsequently established control over Orda's territorial endowment and also subjugated the northern littoral of the Black Sea, incorporating the indigenous Turkic peoples into his army. In the late 1230s and early 1240s, he conducted brilliant campaigns against the Volga Bulgaria and against the successor states to Kievan Rus, bringing their ancient prosperity to an end.

Batu's Blue Horde continued west, raiding Poland and Hungary after the Battles of Legnica and Muhi. In 1241, however, the Great Khan Ögedei died in Mongolia, and Batu turned back from his siege of Vienna to take part in disputing the succession. The Mongol armies would never again travel so far west.

In 1242 Batu established his capital at Sarai, commanding the lower stretch of the Volga River. Shortly before that, the Blue Horde split when Batu's younger brother Shayban left Batu's army to set up his own horde east of the Ural Mountains along the Ob and Irtysh Rivers.

Did you know?
The Golden Horde was a Mongol state established in the thirteenth century after the break up of the Mongol Empire

In settling and establishing a stable sovereignty, called today the Golden Horde, the Mongols gradually lost their Mongol identity. While the descendants of Batu's original Mongol warriors constituted the upper class of society, most of the Horde's population was Kipchaks, Bulgar Tatars, Kyrghyz, Khwarezmians, and other Turkic peoples.

The Horde's supreme ruler was the khan, chosen by the kurultai among Batu Khan's descendants. The prime minister, also ethnically Mongol, was known as "prince of princes,” or beqlare-beq. The ministers were called viziers. Local governors, or baskaks, were responsible for levying tribute and extinguishing popular discontent. Civil and military administration, as a rule, were not separated.

The Horde developed as a settled rather than nomadic culture, with Sarai evolving into a populous and prosperous metropolis. In the early fourteenth century, the capital was moved considerably upstream to Sarai Berqe, which became one of the largest cities of the medieval world, with a population estimated by the 2004 Encyclopedia Britannica at 600,000.

Despite Russian efforts at proselytizing in Sarai, the Mongols clung to their traditional animist beliefs until Uzbeg Khan (1312-1341) adopted Islam as a state religion. Several Russian rulers—Mikhail of Chernigov and Mikhail of Tver among them—were reportedly assassinated in Sarai for their refusal to worship pagan idols, but the khans were generally tolerant and even freed the Russian Orthodox Church of taxes.

The Horde exacted tribute from its subject peoples—Russians, Armenians, Georgians, and Crimean Greeks. The territories of Christian subjects were regarded as peripheral areas of little interest as long as they continued to pay tribute. These vassal states were never incorporated into the Horde, and Russian rulers early obtained the privilege of collecting the Tatar tribute themselves. To maintain the control over Russia, Tatar warlords carried out regular punitive raids to Russian principalities (the most dangerous in 1252, 1293, and 1382).

There is a point of view, much propagated by Lev Gumilev, that the Horde and Russian polities concluded a defensive alliance against the fanatical Teutonic knights and pagan Lithuanians. Enthusiasts point to the fact that the Mongol court was frequented by Russian princes, notably Yaroslavl's Feodor the Black, who boasted his own ulus near Sarai, and Novgorod's Alexander Nevsky, the sworn brother of Batu's successor Sartaq Khan. Although Novgorod never acknowledged the Horde's ascendancy, a Mongol contingent supported Novgorodians in the Battle of the Ice.

Sarai carried on a brisk trade with the Genoese trade emporiums on the Black Sea littoral—Soldaia, Caffa, and Azak. Mamluk Egypt was the khan’s long-standing trade partner and ally in the Mediterranean.

After Batu's death in 1255, the prosperity of his empire lasted for a full century, until the assassination of Jani Beg in 1357. The White Horde and the Blue Horde were effectively consolidated into a single state by Batu's brother Berke. In the 1280s, the power was usurped by Nogai Khan, a kingmaker who pursued a policy of Christian alliances. The Horde's military clout peaked during the reign of Uzbeg Khan (1312-1341), whose army exceeded 300,000 warriors.

Their Russian policy was one of constantly switching alliances in an attempt to keep Russia weak and divided. In the fourteenth century the rise of Lithuania in Northeast Europe posed a challenge to Tatar control over Russia. Thus, Uzbeg Khan began backing Moscow as the leading Russian state. Ivan I Kalita was granted the title of grand prince and given the right to collect taxes from other Russian potentates.

The Black Death of the 1340s was a major factor contributing to the Golden Horde's eventual downfall. Following Jani Beg's assassination, the empire fell into a long civil war, averaging one new khan per annum for the next few decades. By the 1380s, Khwarezm, Astrakhan, and Muscovy attempted to break free of the Horde's power, while the lower reaches of the Dnieper were annexed by Lithuania and Poland.

Mamai, a Tatar general who did not formally hold the throne, attempted to reassert Tatar authority over Russia. His army was defeated by Dmitri Donskoi at the Battle of Kulikovo in his second consecutive victory over the Tatars. Mamai soon fell from power, and in 1378, Tokhtamysh, a descendant of Orda Khan and ruler of the White Horde, invaded and annexed the territory of the Blue Horde, briefly reestablishing the Golden Horde as a dominant regional power. He sacked Moscow as punishment for its insubordination in 1382. 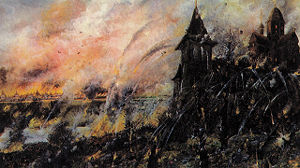 Tokhtamysh's invasion of Russia in 1382.

A fatal blow to the Horde was dealt by Tamerlane, who in 1391 annihilated Tokhtamysh's army, destroyed his capital, looted the Crimean trade centers, and deported the most skillful craftsmen to his own capital in Samarkand.

In the first decades of the fifteenth century, the power was wielded by Edigu, a vizier who routed Vytautas of Lithuania in the great Battle of the Vorskla River and established the Nogai Horde as his personal demesne.

In the 1440s, the Horde was again wracked by civil war. This time it broke up into eight separate khanates: Siberia Khanate, Qasim Khanate, Khanate of Kazan, Khanate of Astrakhan, Kazakh Khanate, Uzbek Khanate, and Khanate of Crimea all seceding from the last remnant of the Golden Horde.

None of these new khanates was stronger than Muscovite Russia, which finally broke free of Tatar control by 1480. Each khanate was eventually annexed by it, starting with Kazan and Astrakhan in the 1550s. By the end of the century the Siberia Khanate was also part of Russia, and descendants of its ruling khans entered Russian service.

The Khanate of Crimea became a vassal state of the Ottoman Empire in 1475 and subjugated what remained of the Great Horde by 1502. Crimean Tatars wreaked havoc in southern Russia in the course of the sixteenth and early seventeenth centuries, but they were not able to defeat Russia or take Moscow. Under Ottoman protection, the Khanate of Crimea continued its precarious existence until Catherine the Great annexed it on April 8, 1783. It was by far the longest-lived of the successor states to the Golden Horde.