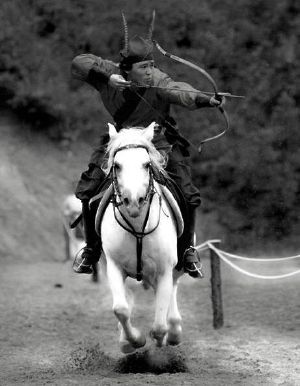 The Hwarang denotes a military society of expert Buddhist warriors in the Silla and Unified Silla dynasties who played an instrumental role in Silla's victories. Silla fostered educational societies that educated students in arts and culture steeped in Buddhism and Taoism. Those societies developed into military organizations as the Silla court centralized political power and battled to unite the Three Kingdoms.

The allure of the Hwarang warrior derives from the sense of a righteous soldier in the tradition of King Arthur's Knights of the Round Table and the Knights Templar. The Hwarang warrior combined superb martial arts, horse-back riding, archery, sword, and physical stamina skills. They combined the spiritual practice of a Pure Land monk with the fighting abilities of a Mongol warrior. That combination won the respect and dread of the nations which Silla and Unified Silla fought. The legacy of the Hwarang inspired the military traditions throughout Korean history.

"Hwarang" means "Flower Knights" or "Flower Youths." Hwa is the Sino-Korean (hanja) character for flower or the act of blooming. Rang means man, sometimes used as a suffix in Silla official titles. The term Hwarang does not literally indicate "youth" or "boys." The Samguk Yusa differentiates between the male and female Hwarang through a change in the second character.

Samguk Yusa referred to Hwarang leaders as gukseon 國仙 ("state immortals," or "state slyph"). The character 仙 derives from Taoist meaning, denoting an immortal or transcendent being dwelling in the mountains. Some linguists consider Seon a transliteration of a pure Korean word meaning "man."[1]

The histories Samguk Sagi (1145), Samguk Yusa (ca. 1285), and the partially extant Haedong Goseungjeon (1215), a compilation of biographies of famous monks of the Three Kingdoms, provide information on the Hwarang. All three works drew heavily on primary sources no longer in existence, including: (1) a memorial stele to Mannang (presumed a Hwarang based upon the suffix nang) by the ninth–tenth century Silla scholar Choe Chiwon; (2) an early Tang account of Silla titled the Xinluo guoji by the Tang official Ling Hucheng; and 3) Hwarang Segi (화랑세기, 花郞世記, Chronicle of the Hwarang) by Kim Daemun, compiled in the early eighth century. In the late 1980s, archaeologists discovered an alleged Hwarang Segi manuscript in Gimhae, South Korea, which some scholars regard as a forgery.[2]

According to the Samguk Sagi and Samguk Yusa, two bands of females called Wonhwa (원화, 源花, "original flowers") preceded the Hwarang. Historians have failed to gain a precise understanding of the nature and activities of the Wonhwa, some scholars speculating that they may have served as kisang, court ladies.[3] Considering their careful training in ethics, that seems a unlikely understanding to the Wonhwa's duties. Women played a much more prominent social role in pre-Confucian Korea, especially in Silla, with three reigning queens in its history.

Both sources record that during the reign of King Jinheung, women selected for their beauty studied filial and fraternal piety, loyalty, and sincerity. The reference lacks a date for the training, leading some scholars express doubt their training occurred during Jinheung‘s reign.[4] The leaders of the two bands of Wonhwa, Nammo (南毛), and Junjeong (俊貞) grew jealous of one another. When Junjeong murdered her rival, the throne disbanded the Wonhwa.

According to the Samguk Yusa, the Silla king, "concerned about the strengthening of the country … again issued a decree and chose boys from good families who were of good morals and renamed them hwarang." That suggests that the Hwarang came from true bone or hallow bone families rather than from the military, as had the Wonhwa.

In 520, King Beopheung instituted Chinese-style reforms and formalized the golpum or bone rank system. In 527, Silla formally adopted Buddhism as a state religion. The establishment of Hwarang took place as the royal court tightened control of the people, a complement to the golpum system and a symbol of harmony and compromise between the king and the aristocracy.[5]

With the consolidation and expansion of Silla and intensification of military rivalries among the Three Kingdoms in the sixth century, the Silla court took a more active interest in the Hwarang. A youths of aristocratic standing usually led Hwarang groups, the state appointing a high ranking official to oversee them. The Hwarang in the later sixth and seventh centuries trained in horsemanship, swordsmanship, javelin and stone throwing, polo, and ladder-climbing.[6] By the seventh century the organization had grown in prestige and numbered several hundred bands.[7]

The Samguk Sagi, compiled by the general and official Kim Busik, emphasized the military exploits of certain Hwarang, while the Samguk Yusa emphasized the groups' Buddhist training.[8] The biographies section of the Samguk Sagi describes young Hwarang who distinguished themselves in the struggles against the Gaya confederacy and later Baekje and Goguryeo. According to the Hwarang Segi, as cited in the Samguk Sagi and Haedong Gosuengjeon: “Able ministers and loyal subjects are chosen from them, and good generals and brave soldiers are born therefrom.”[9] Buddhism, Confucianism, and Taoism profoundly influenced the Hwarang. A Chinese official recorded: "They [Silla] choose fair sons from noble families and deck them out with cosmetics and fine clothes and call them Hwarang. The people all revere and serve them."[10]

Two youths, Gwisan (귀산,貴山) and Chwihang (취항, -項), approached the Silla monk Won Gwang (원광, 圓光) seeking spiritual guidance and teaching, saying: “We are ignorant and without knowledge. Please give us a maxim which will serve to instruct us for the rest of our lives.”[11] Won Gwang, who had gained fame for his period of study in Sui China, replied by composing the Five Commandments for Secular Life (Sae Sok O-Gye; 세속 오계; 世俗五戒). These have since been attributed as a guiding ethos for the Hwarang:

Hwarang In Joseon and contemporary Korea

Following the fall of Silla, the term hwarang survived and changed in meaning again. During the Joseon Dynasty, hwarang came to mean a male shaman. In contemporary South Korea, Hwarang is often used in the names of various schools, organizations and companies.

Retrieved from https://www.newworldencyclopedia.org/p/index.php?title=Hwarang&oldid=1009018
Categories:
Hidden category:
This page was last edited on 20 January 2018, at 16:47.
Content is available under Creative Commons Attribution/Share-Alike License; additional terms may apply. See Terms of Use for details.