UNESCO designated the fortress a World Heritage site in 1997. Hwaseong ("Brilliant Fortress") is located in Suwon, South Korea, 30 kilometers from Seoul. King Jeongjo constructed the fortress complex in 1796 to honor and house the remains of his father Prince Sado. Prince Sado had committed suicide at the decree of King Yeongjo.

The architecture of the fortress combines traditional Eastern and Western styles, which makes it distinctive from other Korean buildings.

The fortress has four gates, "Hwaseomun" (west gate), "Janganmun" (north), "Paldalmun," (south) and Changnyongmun (east). The Janganmun and Paldalmun gates are the larger of the four main gates and resemble Seoul's Namdaemun (gate) in roof design, and stone and wood work. During the Korean War, Paldalmun burned down and was reconstructed in 1975. Janganmun, from the original construction of the fortress, survived destruction. Two-story wooden pavilions top both the north and south gates while Hwaseomun and Changyongmun, the west gate and east gate respectively, have one story pavilions. The north gate's grand design reflects King Jeongjo's desire to move the capital to Suwon. Miniature fortresses, which housed guards to protect the gates, encircle the four main gates.

The wall is 5.74 kilometers in length and four to six meters high, originally enclosing 1.3 square kilometers of land. Artisans generally built walls higher on flat terrain than on mountainous terrain, an incorporation of terrain into the fortress defenses rare in China and Japan. The parapets, made of stone and brick, like most of the fortress, stand 1.2 meters high.

Although unrestored, three-quarters of southern section still remains well maintained and can be hiked on foot.

Hwahongmun (Beautiful Rainbow-Colored Gate) served as the northern flood gate and acted as a bridge connecting villages inside the fortress walls.

Three watchtowers originally protected the fortress but only two remain, both three-stories with distinctive wooden pavilions on top and embrasures for guns and lookouts. The beacon tower had five chimneys to make different signals with smoke or fire. One fire signal indicated peace, two meant the enemy had been spotted, three meant the enemy approached, four meant the enemy had entered the city, and five signals lit meant that the fighting had begun.

Hwaseong Fortress was built over two and a half years, from 1794 to 1796. The architect, Jeong Yak-yong, later become a famous leader of the Silhak movement. Silhak, which means practical learning, encouraged the use of science and industry and Jeong incorporated fortress designs from Korea, China, and Japan and scientific knowledge into his plans. The adoption of brick as a building material for the fortress and the use of efficient pulleys and cranes display the influence of Silhak.

The fortress was also a response to the collapse of the Korean front line during Japanese invasions of Korea (1592-1598). At the time, the dominant Korean fortress-building model was to make a simple wall for the city or town and a separate mountain fortress for the people to evacuate to in times of war. However, this fortress was built to include elements of a wall, defensive fortress, and town center. The four main gates served as the gates for the town. The arrow-launching platforms built along ramparts with crenelleted parapets and battlements were elements of the fortress while the wall also held secret gates for offensive actions. 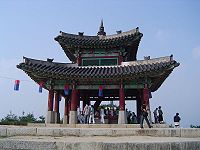 One of the two command posts. This is the western one.

The fortress took 700,000 man-hours to build and cost the national treasury 870,000 nyang, the currency at the time, and 1,500 sacks of rice to pay the workers. In the past, government works corvée labor built structures but in this case government paid workers, a sign of Silhak influence.

King Jeongjo apparently built this fortress to prepare for a move of the capital from Seoul to Suwon. Suwon is strategically positioned to connect Seoul with the Yellow Sea and China. The king wanted to leave the factitious strife of the court to carry out reforms and believed that Suwon had the potential to grow into a new and prosperous capital. To encourage growth, he ordered people to move to Suwon at considerable expense and exempted them from taxes for ten years. King Jeongjo also ordered public works, like educational facilities, for the city.

A white paper "Hwaseong Seong-yeokuigwe" (Records of Hwaseong Fortress Construction) was published in 1800, shortly after Jeongjo died. The ten volume work proved invaluable for the reconstruction effort in 1970 after the fortress had been severely damaged during the Korean War. The volumes were divided by subject. The first volume covered the plans for building, such as the drawing details and list of supervisors. The next six volumes detail the actual implementation of the building, such as the royal orders and records of the wages of the workers. The final three volumes are supplements and detail the construction of an adjoining palace. The manpower was divided by specialty, such as overseers and stone masons and manual labor. The records detail the amount of materials used as well.

On May 1, 2006, an arsonist attacked Hwaseong, damaging Sojangdae watchtower. The arsonist reportedly caused the fire by lighting his clothes and underwear with a cigarette lighter. The fire caused about one billion in damage (about $1 million), destroying the upper floor of the watchtower. The same building was destroyed by fire in 1996, and had undergone restoration since then.