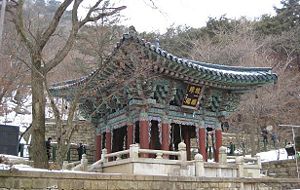 Hwaeom is the Korean name for the Flower Garland school of Buddhism, best known as the Huayan school of Chinese Buddhism that developed as part of the Mahāyāna branch. Buddhism first began in India, and as it spread to other areas, distinct branches developed. The Mahāyāna branch developed in China, and is found today primarily in China, Taiwan, Japan, and Korea. In Korea, the major schools in the Mahāyāna branch are the Zen or Seon School, which focuses on meditation; the Pure Land or Jeongto School and the Hwaeom School, which emphasizes doctrine.

Foundation of Buddhism in Korea

Buddhism entered Korea from China in the fourth century, and developed its own character, influenced by elements of Shamanism, Korea's indiginous religion, and guided by great teachers who arose among Korea's Buddhists. Wonhyo (617-686) sought to eliminate disputes about which doctrines are superior to others by teaching that doctrines are not an end in and of themselves, but a way to lead believers to understand that the world is temporal; that all phenomena are products of the mind. He was also committed to making Buddhism approachable for all people, not only the aristocrats; he worked to make Buddhism practical so that the common people could understand it too. The result of Wonhyo's influence on Korean Buddhism produced Tongbulgyo or interpenetrated Buddhism.

About the same time, Uisang (625-702) returned from in 671 China bringing Huayen Buddhism, which he had been studying with Zhiyan. Uisang's vigorous work to establish the Hwaeom school on the Korean peninsula led the Korean Hwaeom School to become the strongest embodiment of Hyuyen Buddhism anywhere. Uisang's work was greatly aided by the powerful influences of his friend Wonhyo, who although not an official representative of the Hwaeom school, relied deeply on Hwaeom metaphysical principles to establish his concept of interpenetrated Buddhism.

Central to Huayen Buddhism, or Hwaeom, as it is called in Korean, there is a harmony and universal order to the world, and if a person is able to recognize that order, all conflicts and tensions are eliminated. Three main symbols of the core of Hwaeom thought are Taeil Yorae (Mahavairocana), the symbol of light, Kwanum Posal, the Bodhisattva of compassion (Avalokitesvara) and Munsu Posal, the Bodhasattva of wisdom (Manjusri). Statues of these three can often be found in the main hall of of buddhist temples, with compassion on the left and wisdom on the right with Taeil Yorae in the middle. 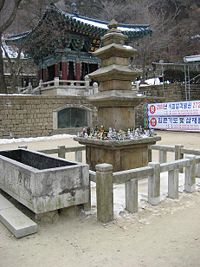 The teachings of the Hwaeom sect are based on the Avatamsaka Sutra, also known as the "Flower Garland Sutra." The Avatamsaka Sutra was delivered by Sakyamuna Buddha soon after he ascended to spirit after attaining Buddhahood. The sutra includes Ten Grades of Faith, Ten Stages of Wisdom, Ten Activities, Ten Transference of Merits, Ten Stages of Bodhisattvas, teachings about enlightment, about developing as a Boddhisattva, and about how to enter Buddha's world. Many people consider the Avatamsaka Sutra the most advanced of all of Buddha's teachings. The writing occupies 81 bamboo scrolls and contains more than 700,000 Chinese characters.

After the passing of these two early monks, the Hwaeom school became strongly established under the influence of a long series of Hwaeom masters, and Buddhism was one of the forces that united the country during the Unified Silla period (668-935). Buddhist rituals were used to protect the peninsula, and the presence of the Bodhisattvas of compassion and wisdom were felt in many places. Many of Korea's most important temples were built during this period, and many beautiful statues, pagodas, and Buddhist art works were created.

The shift toward Seon Buddhism

The Hwaeom school remained in the position of predominant doctrinal school in Korea throughout the up until the middle of the Goryeo period (935-1392). Contemplative Seon Buddhism had entered from China in the preceding centuries, and under the influence of Master Uichon (1055-1101), the son of King Munjong, the emphasis in Korean Buddhist practice shifted from rituals toward meditation. Uichon brought together the contemplative Seon and doctrinal Hwaeom schools and created a new school he called Cheontae. Later in the Goryeo period, Songgwang Temple was founded on Mt. Jogye, and starting from that time the Jogye order, part of the Seon School moved into the dominant position. Within the Seon school, Hwaeom thought would continue to play a strong role, and continues as such to modern times. 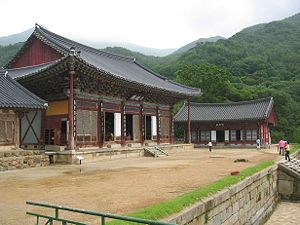 During the period when Hwaeom Buddhism was the dominant School in Korea, there were 10 temples designated as central Hwaeom Temples. Some of them are now Seon Temples, and some are no longer active today. The Hwaeom School currently has 26 active temples in Korea, in contrast to almost 3,000 in the Jogye order. Here are some of the Hwaeom School's past and present major temples:

Retrieved from https://www.newworldencyclopedia.org/p/index.php?title=Hwaom_sect&oldid=1009017
Categories:
Hidden category:
This page was last edited on 20 January 2018, at 16:46.
Content is available under Creative Commons Attribution/Share-Alike License; additional terms may apply. See Terms of Use for details.