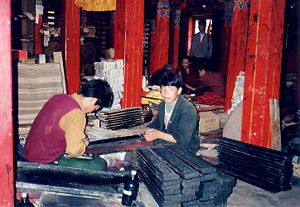 The Kangyur, also known as Kanjur (Tibetan meaning: "The Translation of the Word"), is one of the two major divisions of the Tibetan Buddhist canon along with the Tengyur ("Translation of Treatises"). This twofold classification of Tibetan scriptures became normative by the fourteenth century through the work of Sakya master Buton Rinchen Drub, the 11th Abbot of Shalu Monastery (1290-1364).

The Tibetan Buddhist canon consists of a loosely defined list of sacred texts recognized by the various Tibetan sects and schools. In addition to texts from early Buddhist and Mahayana sources, the canon also includes tantric texts. However, the distinction between sutra and tantra is not rigid. For example, in some editions the tantra section includes the Heart Sutra[1] and even Pali texts such as the Mahasutras.[2] Additionally, the Tibetan canon includes foundational Buddhist texts from the Sarvastivada.

The Kangyur represents a significant development in the crystalization of Tibetan scriptures because it provided textual cohesion and classification to the Tibetan corpus, whose texts were frequently imported by oral transmission. Thus, the Kangyur allowed the various Buddhist schools in Tibet to use an indigenous yardstick to discuss scriptures among their traditions.

The first use of the term Kangyur in Tibetan Buddhism is not known. Collections of canonical Buddhist texts already existed in the time of Trisong Detsen, the sixth king of Tubo, in Spiti, who ruled from 755 until 797 C.E. However, it was not until the fourteenth century, when the formalization of the Tibetan canon's two divisions was compiled by by Bu-ston (1290–1364).

The Tibetans devised their own formally arranged canon of Buddhist scriptures, which they divided texts into two broad categories:

"The Kangyur usually takes up a hundred or a hundred and eight volumes, the Tengyur two hundred and twenty-five, and the two together contain 4,569 works."[3]

The Kangyur is divided into sections on Vinaya, Perfection of Wisdom Sutras, other sutras (75 percent Mahayana, 25 percent Nikayan or Hinayana), and tantras. It includes texts on the Vinaya, monastic discipline, metaphysics, the Tantras, etc.[4] Some describe the prajñāpāramitā philosophy, others extol the virtues of the various Bodhisattvas, while others expound the Trikāya and the Ālaya-Vijñāna doctrines.[5]

The exact number of texts in the Kangyur is not fixed. Each editor takes responsibility for removing texts he considers spurious or adding new translations. Currently there are about twelve Kangyurs. These include the Derge, Lhasa, Narthang, Cone, Peking, Urga, Phudrak, and Stog Palace versions, each named after the physical location of its printing or copying in the case of manuscripts editions. In addition, some canonical texts have been found in Tabo and Dunhuang, which provide earlier texts found in the Kangyur. The majority of extant Kangyur editions appear to stem from the so-called Old Narthang Kangyur, though the Phukdrak and Tawang editions are thought to lie outside of that textual lineage. The stemma of the Kangyur have been well researched in particular by Helmut Eimer and Paul Harrison.[6]

The Bon religion also has its canon literature divided into two sections called the Kangyur and Tengyur claimed to have been translated from foreign languages but the number and contents of the collection are not yet fully known. Apparently, Bon began to take on a literary form about the time Buddhism began to enter Tibet. The Bon Kangyur contains the revelations of Shenrab (Wylie: gShen rab), the traditional founder of Bon.[4]

All four schools of Tibetan Buddhism generally follow a similar curriculum, using the same Indian root texts and commentaries. The further Tibetan commentaries they use differ by school, although since the 19th century appearance of the widely renowned scholars Jamgon Kongtrul and Ju Mipham, Kagyupas and Nyingmapas use many of the same Tibetan commentaries as well. Different schools, however, place emphasis and concentrate attention on different areas.

The exoteric study of Buddhism is generally organized into "Five Topics," listed as follows with the primary Indian source texts for each:

In the Tibetan tradition, some collections of teachings and practices are held in greater secrecy than others. The sutra tradition comprises works said to be derived from the public teachings of the Buddha, and is taught widely and publicly. The esoteric tradition of tantra is generally only shared in more intimate settings with those students who the teacher feels have the capacity to utilize it well. Included among these, and of great importance, are the "Five Treatises of Maitreya." These texts are said to have been related to Asanga by the Buddha Maitreya, and comprise the heart of the Yogacara (or Cittamatra, "Mind-Only") school of philosophy in which all Tibetan Buddhist scholars are well-versed. They are as follows: