Tenzing Norgay George Medal (GM) (May 15, 1914 – May 9, 1986), often referred to as Sherpa Tenzing, was a Nepalese/Tibetan mountaineer. Near his 39th birthday on May 29, 1953, he and Sir Edmund Hillary were the first people known to have reached the summit of Mount Everest, propelling him to a status of worldwide fame and glory. Norgay was also involved in most subsequent expeditions to reach the apex of Mount Everest over the next 20 years.

A native of Nepal, Tenzing was born to a modest family there. His fame led to his being invited on several travels and to the multitude of honors that he received during his successful lifetime. Norgay's feat of reaching the top of the treacherous mountain helped to open up the world to the divergent conditions that exist in its furthest reaches. Unknown species of flora and fauna that habitat this captivating stretch of earth have subsequently become the subject of scientific study. For those who believe that it is a shared human responsibility to ensure the survival of the planet and all its occupants, animate and inanimate, fully exploring and mastering its surface, the depths of its seas and the top of its mountains, is a necessary part of the process. Tenzing played a significant role in furthering human knowledge of the planet we call home, just as did the navigators and explores whose voyages and journeys expanded trade, settlement and cultural exchange around the globe.

There are conflicting accounts about his early life. The account that he gave in his first autobiography, accepted for several years, is that he was a Sherpa born and brought up in Khumbu in Nepal. However, more recent research has led to the claim that he was born a Tibetan in Kharta valley, Tibet, but his family were left destitute when their yaks were killed by disease, and he was sold as a bonded servant to a Sherpa family in Thamey in Nepal.[1] Khumbu lies near Mount Everest, which the Tibetans and Sherpas call Chomolungma which in Tibetan means Mother Goddess of the Earth. He was a Buddhist, the traditional religion of the Sherpas and Tibetans.

His exact date of birth is not known, but he knew it was in late May by the weather and the crops. After his ascent of Everest on May 29, he decided to celebrate his birthday on that day thereafter.

He was originally called "Namgyal Wangdi," but as a child his name was changed on the advice of the head lama and founder of the famous Rongbuk Monastery, Ngawang Tenzin Norbu.[2] Tenzing Norgay translates as "wealthy-fortunate-follower-of-religion." His father, a yak herder, was Ghang La Mingma (d. 1949) and his mother was Dokmo Kinzom (who lived to see him climb Everest); he was the 11th of 13 children, most of whom died young.

He ran away from home twice in his teens, first to Kathmandu and later Darjeeling, and, at age 19, eventually settled in the Sherpa community in Too Song Bhusti in Darjeeling, West Bengal, India. 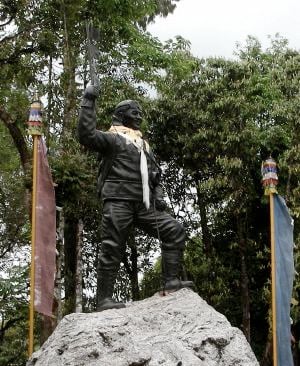 Tenzing took part as a high-altitude porter in three official British attempts to climb Everest from the northern Tibetan side in the 1930s.

He also took part in other climbs in various parts of the Indian subcontinent, and for a time in the early 1940s he lived in what is now Pakistan; he said that the most difficult climb he ever took part in was on Nanda Devi East, in which a number of people died.

In 1947, he took part in an unsuccessful summit attempt of Everest. An Englishman named Earl Denman, Ange Dawa Sherpa, and Tenzing entered Tibet illegally to attempt the mountain; the attempt ended when a strong storm at 22,000 ft (6,700 meters) pounded them. Denman admitted defeat and all three turned around and safely returned.

In 1952, he took part in two Swiss expeditions led by Raymond Lambert, the first serious attempts to climb Everest from the southern (Nepalese) side, during which he and Lambert reached the then-record height of 8,599 m (28,215 ft). 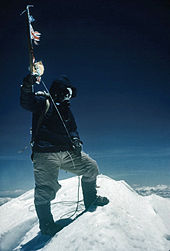 In 1953, he took part in John Hunt's expedition, his own seventh expedition to Everest, in which he and Hillary became the first to reach the summit. Afterwards he was met with adulation in India and Nepal, and was even worshipped by some people who believed him to be an incarnation of Buddha or Shiva.

Hillary and Hunt were knighted by Queen Elizabeth,[3] while Tenzing received either the British Empire Medal,[4] or the George Medal from the British Government for his efforts with the expedition.[2] It has been suggested that Indian prime minister Jawaharlal Nehru refused permission for Tenzing to be knighted.[2]

Tenzing and Hillary were the first people to conclusively set their feet on the summit of Mount Everest, but journalists were persistently repeating the question which of the two men had the right to the glory of being the first one, and who was merely the second, the follower. Colonel Hunt, the expedition leader, declared, "They reached it together, as a team." Tenzing stressed the unity of such teams and of their achievements. He shrugged off the allegation of ever being pulled by anyone, but disclosed that Hillary was the first to put his foot on the summit. He concluded: "If it is a shame to be the second man on Mount Everest, then I will have to live with this shame."[5]

Another interesting aside of this ascent was that all the photos that existed of the mountaineers on the top showed only Tenzing. When asked why there were no photos featuring Hillary, Sir Edmund replied, "Tenzing did not know how to operate the camera and the top of Everest was no place to start teaching him how to use it." Hillary and Tenzing remained friends throughout their lives.

Tenzing was married three times. His first wife, Dawa Phuti, died young in 1944. They had a son, Nima Dorje, who died at the age of four, and two daughters: Pem Pem, whose son Tashi Tenzing climbed Everest, and Nima, who married a Filipino graphic designer, Noli Galang. Tenzing's second wife was Ang Lahmu, a cousin of his first wife. They had no children, but she was a foster-mother to his daughters. His third wife was Dakku, whom he married while his second wife was still alive, as allowed by Sherpa custom (see polygyny). They had three sons Norbu, Jamling, and Dhamey, and one daughter, Deki. Other relatives include his nephews Nawang Gombu and Topgay who took part in the 1953 Everest expedition.

Tenzing never learned to read or write, but he spoke several languages. His native language was either Sherpa or Tibetan (he did speak both from an early age). As an adult he learned to speak fluent Nepali (the language of Darjeeling) and with varying competence Hindustani, English, Garhwali, Punjabi]], Sikkimese, Yalmo, Pasthu, and Chitrali.

Tenzing later became director of field training for the Himalayan Mountaineering Institute in Darjeeling. In 1978, he founded Tenzing Norgay Adventures, a company providing trekking adventures in the Himalaya.

As of 2003, the company was run by his son Jamling Tenzing Norgay, who himself reached the summit of Everest in 1996.

In 1953, Tenzing received the George Medal (GM) from Elizabeth II of the United Kingdom.

King Tribhuvan of Nepal also presented him with the Order of the Star of Nepal, 1st Class (Supradipta-Manyabara-Nepal-Tara) in 1953.

In 1959, the Government of India awarded him the Padma Bhushan, the third highest civilian award of India.

In 1978, the Government of India created the Tenzing Norgay Award in his honor.

Tenzing also received several other decorations through his career.

Tenzing died of a cerebral hemorrhage in Darjeeling, West Bengal, India in 1986, aged 71.

Norgay's ability to be one of the first two people to reach the summit of Mount Everest propelled him to fame in his lifetime. Norgay had the drive to achieve such success from an early age and was destined for such glory. His renown led to many additional honors during his lifetime and he was involved in a multitude of subsequent ventures into the heights of Mount Everest over the next two decades. Norgay's explorations helped to facilitate a greater appreciation for the vast world. His adventures were difficult and are highly respected. Norgay's travels won him fame because of the impact that they had on the human community as a whole. The feat of reaching the icy tops of the treacherous mountain helped to open up the world to the divergent conditions that exist in its furthest reaches and the species of flora and fauna that habitat this captivating stretch of earth. Clearly, Norgay will be remembered for his brave efforts to reach the treacherous apex of Mount Everest as he first did alongside fellow explorer Edmund Hillary in May 1953.