Pangolin, or scaly anteater, is the common name for African and Asian armored mammals comprising the order Pholidota, characterized by a long and narrow snout, no teeth, a long tongue used to capture ants and termites, short and powerful limbs, a long tail, and a unique covering of large, overlapping body scales. There is only one extant family (Manidae) and one genus (Manis) of pangolins, comprising seven or eight species. There are also a number of extinct taxa.

Found in diverse habitats in tropical and subtropical regions in sub-Saharan Africa and southern and southeastern Asia, pangolins are important parts of terrestrial food chains, consuming insects (largely ants and termites) and being consumed by leopards, lions, tigers, hyenas, and pythons (Atkins 2004). Their unique form and behaviors, including rolling up into a pine-cone like ball when threatened, add greatly to the wonder of nature. In addition, they are hunted and trapped for their meat, skin, and scales.

The name "pangolin" derives from the Malay word pengguling ("something that rolls up"). The order name, Pholidota, means "the scaled animal" (Atkins 2004).

Pangolins are similar in appearance to anteaters in that they have a long and tapered body shape and snout, a very long, worm-like tongue, short and powerful limbs, and no teeth. They likewise are similar in form to armadillos, which have short legs and armor-like jointed plates.

The physical appearance of pangolins is marked by large, hardened, overlapping, plate-like scales covering their skin, making them almost reptilian-looking. The scales, which are soft on newborn pangolins but harden as the animal matures, are made of keratin, the same material of which human fingernails and tetrapod claws are made. Pangolins are distinct among mammals in terms of this unique adaptation of a covering of keratin body scales (Briggs and Briggs 2005; Atkins 2004). (The armor of armadillos is formed by plates of dermal bone covered in small, overlapping epidermal scales.) The pangolin is often compared to a walking pine cone or globe artichoke. It can curl up into a ball when threatened, with its overlapping scales acting as armor and its face tucked under its tail. The scales are sharp-edged, providing extra defense.

The scale color, size, pattern, quantity, and shape varies among the different species and also can differ somewhat among individuals within a species (Atkins 2004). Generally, there are 18 rows of overlapping scales around the body, with scales continuous to the tip of the tail. The African species differ from the Asian by having a double row starting two-thirds of the way to the tip of the tail (Atkins 2004). Coloration can vary from dark brown to yellowish, and include dark olive-brown, pale live, and yellow brown (Atkins 2004). The number of scales remain constant throughout life (Atkins 2004).

The limbs of pangolins are short but powerful and are tipped with sharp, clawed digits; the middle digit is the largest (Atkins 2004). The front claws are large and useful for digging into termite mounds and ant hills. However, the front claws are so long that they are unsuited for walking, and so the animal walks with its fore paws curled over to protect them.

The heads of pangolins are small and tapered, and the eyes are small. Depending on the species, the ears may be rudimentary or absent. They have poor vision and only average hearing. The jaw lacks teeth, although embryos have small, temporary, primordial teeth. They do have an excellence sense of smell (Atkins 2004).

The tongues of pangolins are extremely elongated, may be round or flattened, and extend into the abdominal cavity. The tongue is unattached from the hyoid bone and extend past the pharynx deep into the thorax, as with the giant anteater and the tube-lipped nectar bat (Chan 1995). This extension lies between the sternum and the trachea. Large pangolins can extend their tongues as much as 40 centimeters (16 inches), with a thickness of only 0.5 centimeters (1/4 inch) (Mondadori 1988). The very large salivary glands coat the tongue with a sticky saliva for capturing insects.

For defensive purposes (in addition to rolling into a ball), pangolins can emit a noxious smelling musky fluid from glands near the anus, similar to the spray of a skunk.

Pangolins are found in tropical and subtropical regions of Africa and Asia. They are found south of the Sahara in Africa and in southern and southeastern Asia, including INdia, Thailand, Myanmar, southern China, the Malay Peninsula, Indonesia, the Philippines, and various other islands (Atkins 2004). 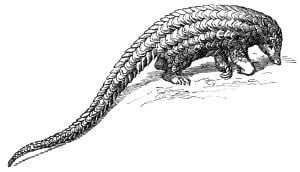 A drawing of a pangolin

Pangolins include both terrestrial (ground-dwelling) and arboreal (tree-climbing) species. Some arboreal pangolins live in hollow trees, whereas the ground dwelling species dig tunnels underground, up to a depth of 3.5 meters (11 feet) (Mondadori 1988). Some species can dwell on both the ground and in trees, although they are classified as either terrestrial or arboreal (Atkins 2004). Most are good climbers and pangolins are also good swimmers (Mondadori 1988).

Pangolins are nocturnal animals, using their well-developed sense of smell to find insects. The long-tailed pangolin (Manis tetradactyla) is also active by day. Pangolins spend most of the daytime sleeping, curled up into a ball (Mondadori 1988).

Pangolins lack teeth and the ability to chew. Instead, they tear open anthills or termite mounds with their powerful front claws and probe deep into them with their very long tongues. Some species, such as the tree pangolin, use their strong tails to hang from tree branches and strip away bark from the trunk, exposing insect nests inside.

Pangolins tend to be shy, solitary, and unsociable creatures, and slow and deliberate movers (Atkins 2004). However, all species can move quickly. When confronted, they will roll up into a ball with the sharp-edged scales offering protection, and movements of the tail and scales deter predators (Atkins 2004). Both urine and the posterior gland secretions are expelled as deterrents as well.

Insectivorous animals, pangolins have a diet almost exclusively one of insects, mostly ants and termites, but also some soft-bodied insects and larvae (Atkins 2004) Their strong sense of smell is employed in finding their prey. Some species have a strong preference for particular species of ants or termites (Atkins 2004).

Gestation is 120-150 days. African pangolin females usually give birth to a single offspring at a time, but the Asiatic species can give birth from one to three (Mondadori 1988). Weight at birth is 80 to 450 grams (3-18 ounces), and the scales are initially soft. The young cling to the mother's tail as she moves about, although, in burrowing species, they remain in the burrow for the first 2 to 4 weeks of life. Weaning takes place at around three months of age, and pangolins becomes sexually mature at two years (Dickman 1984). 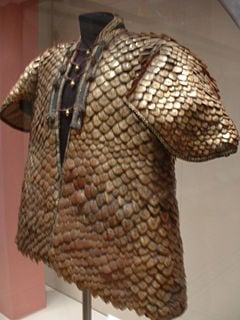 A coat of armor made of pangolin scales, an unusual object presented to George III in 1820.

Pangolin are hunted and eaten in many parts of Africa and it is one of the more popular types of bush meat. Pangolins are also in great demand in China because their meat is considered a delicacy and some Chinese believe pangolin scales reduce swelling, promote blood circulation, and help breast-feeding women produce milk.

They also are hunted for their skins and scales, with the scale used for clothing and used for good-luck charms, such as rings used as a charm against rheumatic fever (Atkins 2004).

The hunting of pangolins, coupled with deforestation, has led to a decrease in some species, such as the giant pangolins (Manis gigantea). Four species of pangolin are listed as Lower Risk/Near Threatened: Indian pangolin (M. crassicaudata), Malayan pangolin (M. javanica), Chinese pangolin (M. pentadactyla), and ground pangolin (M. temminckii). There are often sanctions regarding trade in pangolins and pangolin products (Atkins 2004). 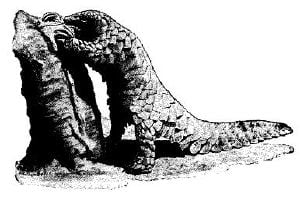 The pangolin raids a termite cathedral mound for a meal.

Pangolins are placed in the order Pholidota. They have been classified with various other orders, for example Xenarthra, which includes the ordinary anteaters, sloths, and the similar-looking armadillos. But newer genetic evidence (Murphy et al. 2001), indicates that their closest living relatives are the Carnivora, with which they form a clade, the Ferae (Beck et al. 2006). Some paleontologists have classified the pangolins in the order Cimolesta, together with several extinct groups.