Afrosoricida is an order of small African mammals that contains two extant families: the golden moles comprising the Chrysochloridae family and the tenrecs (and otter-shrews) comprising the Tenrecidae family. Members of this order can be quite diverse, but, in addition to being united on the basis of genetic studies, do share the presence of a cloaca (common opening for anal and urogenital tracts) and generally (but not in all species) zalambdodonty (with the upper molar characterized by one major v-shaped ridge or cusp). Modern golden moles are found in southern Africa and the tenrecs in Madagascar and western central Africa.

The term Afrosoricida is a Latin-Greek compound name that means "looking like African shrews," reflecting some species' physical similarity with the true shrews of order Soricomorpha, the treeshrews of order Scandentia, and the elephant shrews or "sengis" (which are also restricted to Africa) of the order Macroscelidea. However, tenrec species are widely diverse phonologically and can resemble hedgehogs, mice, opossums, and even otters. They occupy aquatic, arboreal, terrestrial, and fossorial environments.

Members of Afrosoricida play a key role in food chains, consuming invertebrates and helping to control insect pest populations while being consumed by snakes, owls, and mammalian carnivores.

Golden moles (family Chrysochloridae) and tenrecs (family Tenrecidae) used to be classified in an order called Insectivora with other insectivorous mammals, such as shrews (family Soricidae), solenodons (family Solenodontidae), moles (family Talpidae), hedgehogs and gymnures (family Erinaceidae). This Insectivora order is now abandoned, as not all insectivorous mammals are closely related. Molecular evidence indicated that Chrysochloridae (golden moles) and Tenrecidae (tenrecs and otter-shrews) should be placed together in a new order called Afrosoricida, as identified and named by Stanhope et al. (1998). Afrosoricida now is generally considered part of the newly recognized clade or superorder known as Afrotheria, which includes the sengis (order Macroscelidea), elephants (Proboscidea), hyraxes (order Hyracoidea), manatees and dugons (order Sirenia), and aardvarks (order Tubulidentata) (Fitzgerald 2004). However, there is no strong morphological evidence to link the Afrosoricida together with other Afrotherians (Bonner and Jenkins 2005). The Afrosoricida are sometimes considered part of the Afroinsectiphilia, a clade within Afrotheria.***

Some biologists use Tenrecomorpha as the name for the tenrec-golden mole clade, but Bronner and Jenkins (2005) argue that Afrosoricida is more appropriate, despite their misgivings about the similarity between the name "Afrosoricida" and the unrelated shrew subgenus Afrosorex. 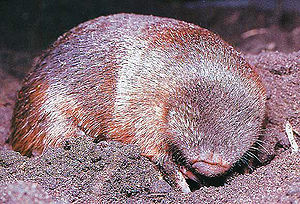 Golden moles form the family Chrysochloridae. The golden moles bear a resemblance to both the true moles in family Talpidae and the marsupial moles in family Notoryctidae, including having small ears hidden by their fur, short tails, and eyes covered by skin. Their resemblance to the marsupial moles of Australia is so remarkable that, the marsupial/placental divide notwithstanding, arguments were once made that they were related, possibly because they are very primitive placentals and because of the many mole-like specializations. Golden moles are common in southern Africa. They live almost exclusively underground, beneath grassveld, forest, swamps, deserts, or mountainous terrain.

Golden moles range in size from about 8 to about 20 cm. Like several other burrowing mammals with similar habits, golden moles have short legs with powerful digging claws, very dense fur that repels dirt and moisture, and toughened skin, particularly on the head. Their eyes are non-functional and covered with skin and fur, the ears are just tiny openings, and, like the marsupial moles, they have an enlarged leather-like pad to protect their nostrils. Golden moles have muscular shoulders and an enlarged third claw on the forelimbs to aid digging, with no fifth digit and vestigial first and fourth digits; the hind feet retain all five toes and are webbed to allow efficient backward shoveling of the soil loosened with the front claws. Their malleus is very enlarged; their primary sense is that of touch, and they are particularly sensitive to vibrations that may indicate approaching danger. Both males and females have a single opening for the urogenital system (cloaca). They have a unique pair of bones in the occipital area of the skull called tabulars. The first incisor is enlarged (Ciszek and Myers 2000a; Kuyper 1984).

While the desert species simply 'swim' through loose sand, all other species construct permanent burrows. The burrows are relatively complex in form, and may penetrate as far as a meter below ground. They include deep chambers for use as bolt-holes, and others as latrines. Excavated soil is pushed up to the surface as ridges or mole-hills, or is compacted into the tunnel walls. During extremely hot weather, Grant's golden mole will retreat to depths of around 50 cm and enter a state of torpor, thus conserving energy (Piper 2007).

Because these mammals were previously thought to have originated in Gondwana, golden moles used to be regarded as rather "primitive" creatures: their low resting metabolic rate and their ability to switch off thermoregulation when inactive, however, are no longer regarded as indications that golden moles are undeveloped "reptilian mammals," but rather as essential adaptations to a harsh climate. By going into a torpor when resting or during cold weather, they conserve energy and reduce their need for food. Similarly, they have developed particularly efficient kidneys and most species do not need to drink water at all.

Females give birth to one to three hairless young in a grass-lined nest within the burrow system. Breeding occurs throughout the year. The adults are solitary, and their burrowing territory may be aggressively defended from intruders, especially where resources are relatively scarce (Kuyper 1984).

Golden moles feed on small insects, which are located with the sense of hearing. Golden moles use a head-dipping behavior to detect the vibrations produced by grass mounts in order to position themselves within detection range of the head-banging alarms produced by their termite prey (Narins et al. 1997). Grant's golden mole (Eremitalpa granti) can cover 6 km each night looking for food (Piper 2007).

Of the 21 species of golden mole, no fewer than 11 are threatened with extinction. The primary causes are sand mining, poor agricultural practices, increasing urbanisztion, and predation by domestic cats and dogs. 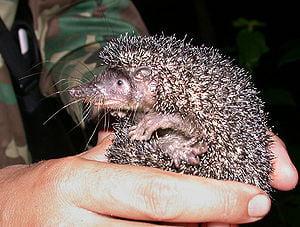 Tenrecs (some species of which are commonly known as "otter-shrews") comprise the family Tenrecidae. The are more numerous and diverse on Madagascar, but some are found in the western central areas of the African mainland. Tenrecs are widely diverse; as a result of convergent evolution, they resemble hedgehogs, shrews, opossums, mice, and even otters. They occupy aquatic, arboreal, terrestrial, and fossorial environments. Some of these species, including the greater hedgehog tenrec, can be found in the Madagascar dry deciduous forests. The three species in the subfamily Potamogalinae ("otter-shrews") are all aquatic forms.

Tenrecs do not have a pronounced body type, having evolved to fill the insect-eating niche in Madagascar. Their coat can vary from smooth to spiny and the coloration of the fur is generally dirt brown. Members of the subfamily Tenrecinae all have spines (Ciszek and Myers 2000). As with golden moles, but unusual among placental mammals, the anus and urogenital tracts of tenrecs share a common opening, or cloaca, a feature more commonly seen in birds, reptiles, and amphibians. They have low body temperatures, sufficiently so that the males do not require a scrotum to cool their sperm as most other mammals do (Martin 1984). (Golden moles also lack a scrotum.)

Most species are nocturnal and have poor eyesight. Their other senses are well developed, however, and they have especially sensitive whiskers. As with many of their other features, the dental formula of tenrecs varies greatly between species; they can have from 32 to 42 teeth in total. With the exception of the African otter shrews, the upper molars are zalambdodont; in the African otter shrews (subfamily Potamogalinae) the molars are dilambdodont (Ciszek and Myers 2000). Unusual for mammals, the permanent dentition in tenrecs tends not to completely erupt until well after adult body size has been reached (Asher and Lehmann 2008). This is one of several anatomical features shared by elephants, hyraxes, sengis, and golden moles (but apparently not aardvarks), consistent with their descent from a common ancestor.

All species appear to be at least somewhat omnivorous, with invertebrates forming the largest part of their diets. The three species found on the African mainland (Potamogale velox, Micropotamogale lamottei, M. ruwenzorii) have more specialized diets, centered on their habitat in fast-running streams of the African tropics, from Liberia in the west to Lake Victoria in the east. One species from Madagascar, Limnogale mergulus, is also semiaquatic (Benstead and Olson 2003).

At least some species of tenrecs are social, living in multigenerational family groups with over a dozen individuals. Tenrecs have a gestation period of 50 to 64 days, and give birth to a number of relatively undeveloped young. While the otter shrews have just two young per litter, the tailless tenrec can have as many as 32, and females possess up to 29 teats, more than any other mammal (Martin 1984).

There are four subfamilies, 10 genera, and 34 species of tenrecs (Bronner and Jenkins 2005):

All of the species from Madagascar appear to have evolved from a single, common ancestor, with the mainland tenrecs comprising the next, most-closely related mammalian species (Olson and Goodman 2003; Poux et al. 2008). While the fossil record of tenrecs is scarce, at least some specimens from the early Miocene of Kenya show close affinities to living species from Madagascar (Asher and Hofreiter 2006), such as Geogale aurita.