Lagomorpha is an order of large-eared, terrestrial mammals that comprises the rabbits, hares, and pikas. Members of the order are characterized by large ears, a second peg-like upper incisor behind the primary incisor, a single layer of enamel in the front incisors, lack of canine teeth, generally hair on the soles of the feet, and the practice of coprophagy (reingestion of feces). The two extant families are the the Leporidae (hares and rabbits), and the Ochotonidae (pikas). Lagomorphs are distributed widely around the world, whether as native or introduced species. There are about 90 species.

The very high reproductive rate of most lagomorphs—particularly leporids (rabbits, hares) and burrowing pikas—is not only fundamental to the survival of the various species; it also allows them to provide a very important food resource for numerous mammals (such as the fox, lynx, weasel, and marten) and birds of prey (owls, hawks). Through a symbiotic relationship with various bacteria and other microorganisms in their digestive tract, and the practice of coprophagy (feces-eating), they are able to extract sufficient nutrition from the plant matter that forms their diet and provides the base for such energy and nutrients for their predators.

Lagomorphs provide a number of functions for human beings. Hares and rabbits have been a source of food and fur, and some are highly sought in sports hunting. Snowshoe hares have been very important in the fur trade. Pikas also are diurnally active and their remote locations and engaging quality adds to their attraction to ecotourists and others seeing them in the wild. On the other hand, the introduction of the European rabbit to Australia has result in their become a pest that has damaged agriculture, the raising of livestock, and the habitat. 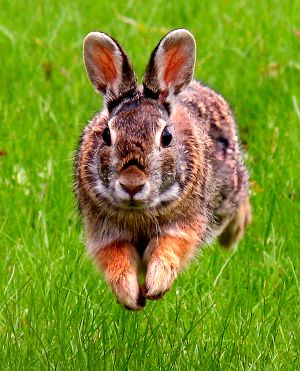 Lagomorphs (Order Lagomorpha) can resemble rodents and once were classified in Order Rodentia. However, even then they were separated as a distinct group, Duplicendetata, based on having a second, small, peg-like upper incisor nestling behind the first, large, continually-growing primary incisor. Rodents lack this second incisor behind the primary. In addition to having four incisors in the upper jaw, not two as in the Rodentia, the front incisors of lagomorphs have a single layer of enamel versus a double layer in rodents. Furthermore, unlike in rodents, the enamel of lagomorphs surrounds the incisors on all sides and is not colored by stored pigments (Smith 2004).

Lagomorphs also are distinguished from rodents by being almost wholly herbivorous, whereas many of the rodents will eat both meat and vegetation; the few recorded exceptions within the Lagomorpha occur among members of both Lepus and Ochotona, and involve the occasional foraging for carrion as a supplementary winter food source (Best and Henry 1994; eNature 2007; Taiga.net 1998). In addition, the male's scrotum is in front of the penis, unlike rodents, where it is behind), and the penis contains no bone (baculum), unlike in rodents.

However, lagomorphs resemble rodents in that their teeth grow throughout their life, thus necessitating constant chewing to keep them from growing too long.

Other characteristics of lagomorphs are large to huge ears compared to their body and short tails, which are not even visible in pikas. The soles of the feet are covered with hair, with the exception of the distal-most toe pads in pikas, with the hairs on the soles rectangular as viewed in cross-section. They have long fur. Extant lagomorphs all practice reingestion of their feces (coprophagy), and there is only one opening for reproduction, urine, and feces. They are unable to hold food with their paws, as with rodents (Smith 2004).

Members of the Leporidae (hares and rabbits) have long legs, large hind feet, and have added strength and lightness in their legs by having the tibia and fibula fused distally. They tend to be larger than pikas, ranging from 25 to 75 centimeters (10-30 inches) in length and from 0.4 to 6.0 kilograms (14 ounces to 13.2 pounds) in weight (Smith 2004).

The name of the order is derived from the Greek lagos (λαγος), meaning "hare," and morphē (μορφή), meaning "form," and thus means "hare-shaped."

Lagomorphs have a broad distribution, with the leoprids found naturally worldwide with the exception of Australia, New Zealand, oceanic islands, southern South America and most of the Amazon River Basin but having now been introduced to such areas, including over 500 oceanic islands, and Australia, New Zealand, and southern South America. Pikas have a smaller distribution in North America, much of Asia, the northern Middle East, and across Russia (Smith 2004).

Lagormorphs do not hibernate and are active year round.

Lagomorphs are almost exclusively herbivorous, with a diet consisting of grasses and herbs, as well as fruit, roots, leaves, buds, seeds, and bark. The only known case of eating meat as a necessary part of the diet is a population of collared pika (O. collaris), which eat the brains of birds that happen to die and fall on the islands of rock in the middle of ice field where they live (Smith 2004).

Lagomorphs have a very large digestive system that allows them to digest the difficult-to-digest plant matter that they subsist on. The caecum may be up to ten times the size of stomach and hosts numerous microorganisms that can help break down the plant material and produce various vitamins and proteins. By excreting a soft feces from the caecum and then ingesting this soft feces, they can obtain important vitamins and other nutrition. This process is called coprophagy ("feces-eating") (Smith 2004). Essentially, the digestive system is able to yield two types of feces, the soft feces and hard, round, dry pellets. This separation is done mechanically in the small intestine, with the fine food particles shunted into the caecum, and the large, generally poor quality pellets quickly passed out of the animal. However, the process actually is more complex, as hard pellets also are reingested at times during the day as well (Smith 2004).

Lagomorph species vary in terms of social organization, with some being highly social (such as the European rabbit and most species of burrowing pikas) and some extremely unsocial (such as the rock-dwelling pikas). Most hares and rabbits are solitary and non-territoriality, although they form large feeding aggregations, such as with the Arctic hare. However, the European rabbit (Oryctolagus cuniculus) is extremely social (Smith 2004).

Lagomorphs tend to be highly reproductive, but especially among the leporids, with many species producing large litters each year and young becoming sexually mature at a young age. Burrowing pikas also tend to have several sequential, large litters. Rock-dwelling pikas tend to have small liters and normally only one successful one a year. Lagomorphs also are known for their lack of parental care. Some mothers only nurse the young about one time a day, although the milk is hihly nutritous (Smith 2004).

Hares are distinguished from rabbits by give birth to precocial young (fully furred and with the eyes open) versus the rabbits that have atricial young (born without any fur and with eyes closed).