Pika is the common name for small mammals comprising the family Ochotonidae of the rabbit order Lagomorpha, characterized by relatively large round ears, the lack of a visible tail, similar length of the forelimbs and hindlimbs, and smaller size than the related rabbit. Pikas are found in the mountains and steppe of central Asia and the mountains of eastern Europe and western North America. There is one extant genus, Ochotonoa, with about thirty species. Other common names for members of this family are mouse hare, rock rabbit, and coneys, as well as whistling hare due to its high-pitched alarm call when diving into its burrow.

Pikas provide important ecological functions as part of food chains, consuming a variety of plant matter and being preyed upon by weasels and martens. For humans, their economic value is minimal, although their furs have been used to make felt. However, their soft feces have been used as a folk medicine in central Asia (Smith 2004). In addition, these small balls of fluff add to the human wonder of nature, both through their unique form and their unique behaviors—such as their alarm calls to warn of predators (which varies whether the predator is a surface-feeding marten or a weasel that can pursue the pika into its lair) or their characteristic of gathering and drying of vegetation to store in a centralized cache for food during the winter.

The rabbit order, Lagomorpha, consists of two extant families, the pikas in Ochotonidae and the rabbits and hares in Leporidae. Based on molecular evidence, it is believed that these two families separated about 37 million years ago, in the early Oligocene.

The name pika (archaically spelled pica) is used for any member of the Ochotonidae. Only one extant genus, Ochotona, is recognized within the family. Differentiating pika species on the basis of external characters is difficult because of their close resemblance (Smith 2004). While molecular techniques help in clarifying pika systematics, there remains much taxonomic uncertainly. Currently, thirty species of pikas are recognized (Smith 2004).

Pikas are small hamster-like animals, with short limbs, rounded ears, and short tails that are not visible beneath the fur. They look like "small egg-shaped balls of fluff sporting thin, relatively large round ears" (Smith 2004). Pikas range in weight from just 80 grams (3 ounces) for the Gansu pika (Ochotonoa cansus) to 300 grams (10 ounces) for the Glover's pika (O. gloveri). They are about 18 to 20 centimeters (7-8 inches) in body length, with a tail less than 2 centimeters long (less than one inch). Most pikas have a brownish gray fur.

As with other lagomorphs, pikas have gnawing incisors and no canines, although they have fewer premolars than rabbits, giving them a dental formula of:

Pikas are native to cold climates, mostly in Asia, North America, and parts of eastern Europe. They are found throughout central Asia, in the Himalayan massif and associated ranges, and from eastern Siberia to Sakhalin Island and to Hokkaido Island in Japan. The steppe pika (Ochotona pusilla) goes as far west as the Ural Mountains and there is one population to the west of these mountains that can be considered as European. In North America, they are found at higher elevations throughout the inter-montane west and in the mountains of Alaska and the Yukon (Smith 2004).

Most species live on rocky mountain sides, where there are numerous crevices to shelter in, although some also construct crude burrows. A few burrowing species are instead native to open steppe land. In the mountains of Eurasia, pikas often share their burrows with snowfinches, which build their nests there (Kawamichi 1984).

In an article in the Journal of Biogeography, archeologist Donald Grayson cautioned that human activity and global climate change appears to be pushing the American pika population to ever-higher elevations and thus possibly toward extinction (Grayson 2005). Grayson studied pika habitation over the past 40,000 years in the region between the Sierra Nevada (U.S.) and Rocky Mountains. 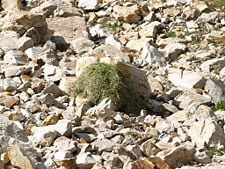 Pikas are herbivores, and feed on a wide variety of plant matter. Because of their native habitat, they primarily eat grasses, sedges, shrub twigs, moss, and lichen.

Pikas are diurnal or crepuscular, with higher altitude species generally being more active during the daytime. They show their peak activity before the winter season. Pikas do not hibernate, so they rely on collected hay for warm bedding and food. Pikas gather fresh grasses and lay them in stacks to dry. Once the grasses dry out, the pikas take this hay back to the burrows for storage. It is not uncommon for pikas to steal hay from others; the resulting disputes are usually exploited by neighboring predators like ferrets and large birds.

Rock-dwelling pikas tend to be territorial as pairs or individuals and are relatively asocial. Burrowing pikas that occupy meadow or steppe habitats tend to be social and live in family burrow system territories. Eurasian pikas commonly live in family groups and share duties of gathering food and keeping watch.

Rock-dwelling pikas have small litters of less than five young, while the burrowing species tend to give birth to more young, and to breed more frequently, possibly due to a greater availability of resources in their native habitats. The young are born after a gestation period of between 25 and 30 days (Kawamichi 1984).

Pikas engage in a variety of calls. Rock-dwelling pikas have a vocal repertoire of two calls, while burrowing pikas have a number of different vocalizations. Both have a long-call or song used by males during the breeding season. They also have an alarm call when they see a predator. When a marten is spotted, they immediately use an alarm call to warn neighbors. However, when a weasel is spotted, they usually wait a few minutes before sounding an alarm. This appears to relate to the strategies of the predators. A marten cannot follow a pika into its burrows or the cracks in the rocks where the pikas live. However, a weasel can follow pikas into their lairs and, by waiting to sound the alarm. the weasel may have moved out of the pika's territory before the pika warns its neighbors (Smith 2004).

Rock-dwelling pikas tend to be longer lived than burrowing pikas, with some reaching six years of age (Smith 2004).