Microbiotheria is an order of New World marsupials of which the only living species is the monito del monte or colocolo (Dromiciops gliroides), a mouse-sized, tree climber species found in southern and central Chile and southwestern Argentina. Microbiotheres were once considered to be members of another New World marsupial order, Didelphimorphia (opossums), but were separated based on several morphological differences and recent evidence now suggests they may be more closely related to Australasian marsupials than those of the New World.

Monito del monte, which feeds mainly on invertebrates and fruits, is the sole seed dispersal agent of the keystone plant species Tristerix corymbosus (Loranthacous mistletoe), as well as the only known seed disperser for five other species. Monitos del monte also disperse the seeds of at least 11 other plants as well. Despite this value, as well as playing a key role in food chains, the monito del monte is rapidly losing its habitat due to human encroachment (and likely habitat degradation from introduced animals) and is now listed as "near threatened" on the the IUCN Red List of Threatened Species.

Mircobiotheria is one of three orders of New World marsupials, the others being Paucituberculata (shrew opossums) and Didelphimorphia (opossums). Unlike placental mammals (Placentalia), almost all members of Marsupialia lack the placenta that connects the mother with the developing fetus in the womb. Some marsupials have a rudimentary placenta that functions for only a short time, such as the bandicoot. Marsupial females typically have an external pouch in which the immature young are raised after birth until early infancy. The newborn typically crawl to this pouch after birth, and attach themselves to milk-secreting teats (nipples), and are nursed until they can survive outside the pouch. This time period in the pouch is similar to the later stages of a placental mammal's development in the womb. Marsupials also differ from placental mammals in their reproductive traits. The female has two vaginas (the tubular tract leading from the uterus to the exterior of the body). Both of the vaginas open externally through one orifice, but lead to different compartments within the uterus. Males usually have a two-pronged penis, which corresponds to the females' two vaginas.

The monito del monte is the only surviving member of the order Microbiotheria and is considered a "living fossil" (Lobos et al. 2005). Microbiotheria is an ancient order, with at least 13 other species, in about 7 genera, identified from the fossil record (Siciliano Martina 2014). The oldest microbiothere currently recognized is Khasia cordillerensis, based on fossil teeth from Early Paleocene deposits at Tiupampa, Bolivia. Numerous genera are known from various Paleogene and Neogene fossil sites in South America. A number of possible microbiotheres, again represented by isolated teeth, have also been recovered from the Middle Eocene La Meseta Formation of Seymour Island, Western Antarctica. Finally, several undescribed microbiotheres have been reported from the Early Eocene Tingamarra Local Fauna in Northeastern Australia; if this is indeed the case, then these Australian fossils have important implications for understanding marsupial evolution and biogeography.

Although microbiotherians once were thought to be members of the order Didelphimorphia (the order that contains the Virginia opossum), an accumulation of both anatomical and genetic evidence in recent years has led to the view that microbiotheres are not didelphids at all, but are instead most closely related to the Australasian marsupials (Siciliano Martina 2014). The distant ancestors of the monito del monte, it is thought, remained in what is now South America while others entered Antarctica and eventually Australia during the time when all three continents were joined as part of Gondwana (Nilsson et al. 2010; Schiewe 2010).

It was long been suspected that South American marsupials were ancestral to those of Australia, consistent with the fact that the two continents were connected via Antarctica in the early Cenozoic. Australia’s earliest known marsupial is Djarthia, a primitive mouse-like animal that lived about 55 million years ago. Djarthia had been identified as the earliest known australidelphian—Australidelphia is a clade comprised of the microbiotheres and the Australian orders—and this research suggested that the monito del monte was the last of a clade which included Djarthia (Beck et al. 2008). This implied that the ancestors of the Monito del Monte might have reached South America via a back-migration from Australia. The time of divergence between the Monito del Monte and Australian marsupials was estimated to have been 46 million years ago (ZSL 2014). However, in 2010, analysis of retrotransposon insertion sites in the nuclear DNA of a variety of marsupials, while confirming the placement of the Monito del Monte in Australidelphia, showed that its lineage is the most basal of that superorder. The study also supported the view that the most basal of all marsupial orders are the other two South American lineages (Didelphimorphia and Paucituberculata, with the former probably branching first). This indicates that Australidelphia arose in South America (along with the ancestors of all other living marsupials), and probably reached Australia in a single dispersal event after Microbiotheria split off (Schiewe 2010; Inman 2010; Nilsson et al. 2010). 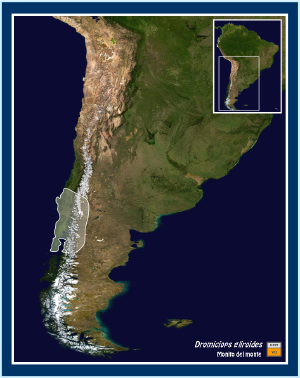 Monito del monte (Dromiciops gliroides), the only extant member of the Microbiotheria order, is a small, mouse-sized, tree-climbing, insectivorous, South American marsupial whose present distribution is limited to a narrow range in Chile and Argentina. It is the sole New World representative of the superorder Australidelphia (all other New World marsupials are members of Ameridelphia). The name monito del monte means "little bush monkey" in the Spanish language. Dromiciops gliroides is also known as the colocolo" because of the sound produced (Siciliano Martina 2014).

This species is diminutive, ranging in size from 16 to 49.5 grams and with a total body length (including the tail) of 19.5 to 24.6 cm. The tail is moderately prehensile and ranging in size from 9.0 to 13.2 cm. Colocolos have a short, silky fur, that is dense, grayish-brown dorsally, pale whitish ventrally, reddish-brown on the back of their neck and top of their head, and with a light patch on each shoulder. They have white cheeks, a dark muzzle, and with a dark ring around each eye. Colocolos have large hands and feet, often with frrry tufts on their digits concealing their claws. They have 50 teeth. Females have a well-developed pouch with 4 mammae (Siciliano Martina 2014).

Monitos del monte inhabit dense, humid forests of southern beech (genus Nothofagus) and bamboo (genus Chusquea) (Lobos et al. 2005; Siciliano Martina 2014). They range from sea level to elevations up to 1600 meters (Siciliano Martina 2014). Monitos del monte mainly live in trees, where they construct spherical nests of water resistant colihue leaves. These leaves are then lined with moss or grass, and placed in well protected areas of the tree. The nests are sometimes covered with gray moss as a form of camouflage. These nests provide the monito del monte with some protection from the cold, both when it is active and when it hibernates. It stores fat in the base of its tail for winter hibernation (Nowak and Dickman 2005; Lord 2007).

This is a nocturnal and arboreal species, which feed mainly on invertebrates and fruits. Among invertebrates, they consume beetles, crickets, grasshoppers, ants, bees, wasps, and butterfly pupae and larvae. Among fruits, they consume fruits and seeds from mistletoe (Tisterix corymbosus), quilineja (Luzuriaga polyphylla), and hued-hued (Gaulterhia insane) (Siciliano Martina 2014).

The monito del monte normally reproduces in the spring and can have a litter size varying anywhere from one to four young. When the young are mature enough to leave the pouch, they are nursed in a nest, and then carried on the mother’s back. The young remain in association with the mother after weaning. Males and females both reach sexual maturity after 2 years. They are known to reproduce aggressively, sometimes leaving blood on the reproductive organs (Spotorno et al. 1997; Brugni and Flores 2007; Lidicker and Ghiselin 1996).

A study performed in the temperate forests of southern Argentina showed a mutualistic seed dispersal relationship between D. gliroides and Tristerix corymbosus, also known as the Loranthacous mistletoe. The monito del monte is the only known dispersal agent for this keystone plant species, which needs to pass through the monito del monte digestive tract to stimulate germination (Siciliano Martina 2014). Without this marsupial, the plant would likely become extinct. Scientists speculate that the coevolution of these two species could have begun 60–70 million years ago (Garcia et al. 2009; Amico et al. 2009). There are another five species for which the monito del monte is also the only known seed disperser, as well as other plants for which it also disperses the seeds (Siciliano Martina 2014).

Human superstition about this species being a bad omen has sometimes led people to set their homes on fire simply if the animal is seen nearby, and other inaccurate beliefs (venomous and cause of various diseases) has also lead to unreasonable fears. These animals are listed as "near threatened" on the IUCN Red List of Threatened Species and they are losing their habitat due to agriculture, logging, and introduced species (Siciliano Martina 2014).