Macrocosm/microcosm is a Greek compound of μακρο- "Macro-" and μικρο- "Micro-," which are Greek respectively for "large" and "small," and the word κόσμος kósmos which means "order" as well as "world" or "ordered world."

The paired concept of Macrocosm and Microcosm presents the idea that there is a corresponding similarity in pattern, nature, or structure between human beings and the universe. The concept of microcosm/macrocosm views man as a smaller representation of the universe and the universe as an anthropomorphic existence. This concept is found throughout the history of thought from ancient times through the renaissance, and in various religious traditions including Buddhism and the Upanishads. Similar concepts were held by hermetic philosophers like Paracelsus, and by Baruch Spinoza, Leibniz, and later by Friedrich Schelling (1775-1854).

This idea, however, generally declined after the seventeenth century along with the development of modern science. After modern times, this idea was mainly preserved in the realm of literature in works by as Novalis (1772 - 1801), a German romanticist poet, and Baudelaire (1821 – 1867), a French poet, as well as by some philosophers listed above. 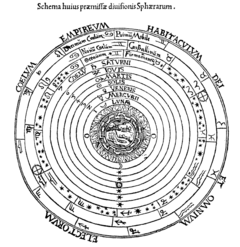 The Ancient and Medieval cosmos as depicted in Peter Apian's Cosmographia (Antwerp, 1539).

In its most general sense, cosmos is an orderly or harmonious system. It originates from the Greek term κόσμος meaning "order, orderly arrangement, ornaments," and is the antithetical concept of chaos. Today the word is generally used as synonym of the word 'universe' (considered in its orderly aspect). The word cosmetics originates from the same root.

The idea of the correspondence or some continuity between the cosmos and human being is found in Pythagoras in an incipient form. He, however, did not use the terminology of microcosm/macrocosm and did not have a clear anthropomorphic view of the cosmos.

Pythagoras is said to have been the first philosopher to apply the term "cosmos" to the Universe, perhaps from application to the starry firmament. The term so used is parallel to the Zoroastrian term aša, the concept of a divine order, or divinely ordered creation. Cosmos, thus, means not only the totality of the universe but it implies that the universe is ordered by the principle of harmony and balance. Pythagoras conceived the number or numerical ratio as the universal principle of harmony and understood that human aesthetic experience in music and art is closed tied to the orderly movement of stars. His understanding of the correspondence between the cosmos and man gave a framework of thought within which religious rituals, studies of mathematics and astronomy, and artistic activities are closely tied. Pythagoras and his religious sect offered mathematical solutions for questions concerning the divine and conceived mathematical exercises as religious practices for the purpose of purifying the soul.

Although Plato did not use the terminology, a clearer concept of macrocosm/microcosm is found in his Timaeus. He wrote on the idea of the soul of cosmos in its anthropomorphic representation:

Therefore, we may consequently state that: this world is indeed a living being endowed with a soul and intelligence...a single visible living entity containing all other living entities, which by their nature are all related.

The Neo-Platonist Plotinus fused the concept of microcosm/macrocosm into his unique mystical metaphysics. He conceived the cosmos and human being not as totally separated beings but as a continuous existence. The soul and body or the spirituality and the materiality were conceived as one fused existence, and the fusion of spirituality/materiality was applied to all beings. In Plotinus' metaphysics, every being is both spiritual and material, and each being manifests these natures in varying degrees.

Within the context of his mystical metaphysics, Plotinus developed a clearer concept of "world-soul" (Latin: Anima mundi) than Plato's idea in Timaeus. Plato presented the concept of "demiurge" (from the Greek δημιουργός dēmiourgós, Latinized demiurgus, meaning "artisan" or "craftsman," literally "worker in the service of the people," from δήμιος "of the people" + ἔργον "work"), a creative deity, who designed and structured the order of the cosmos, but not the creator of the cosmos itself.

Plotinus conceived this process of the creation of the cosmos as an "emanation from the one." He argued that "nouse" (Greek: νοῦς or νόος; mind or intellect) and "world-soul" were emanated from the divine origin, which he called the One. In the context of the emanation, Plotinus explained the soul of the cosmos. Plonitus's view of the creation of the universe is more naturalistic than Christian concept of Creation.

Plotinus, in a sense, offered an alternative to the orthodox Christian notion of creation ex nihilo (out of nothing), which attributes to God the deliberation of mind and action of a will, although Plotinus never mentions Christianity in any of his works. Emanation ex deo (out of God), confirms the absolute transcendence of the One, making the unfolding of the cosmos purely a consequence of its existence; even though the emanations themselves diminish the farther they are from the source, the One is in no way affected or diminished. Plotinus uses the analogy of the Sun which emanates light indiscriminately without thereby diminishing itself, or the reflection in a mirror that does not diminish or otherwise alter the object being reflected.

The first emanation is nous (thought), identified metaphorically with the demiurge in Plato's Timaeus. It is the first will towards Good. From nous proceeds the world soul, which Plotinus subdivides into upper and lower, identifying the lower aspect of Soul with nature. From the world soul proceeds individual human souls, and finally, matter, at the lowest level of being and thus the least perfected level of the cosmos. Despite this relatively pedestrian assessment of the material world, Plotinus asserted the ultimately divine nature of material creation since it ultimately derives from the One, through the mediums of nous and the world soul. It is by the Good or through beauty that we recognize the One, in material things and then in the Forms.

Based upon the idea of continuity between the cosmos and man, and between spirituality and materiality, mystic union between man and the cosmic deity became an important religious practice for Plotinus.

The essentially devotional nature of Plotinus' philosophy may be further illustrated by his concept of attaining ecstatic union with the One (henosis see Iamblichus). Porphyry relates that Plotinus attained such a union four times during the years he knew him. This may be related to enlightenment, liberation, and other concepts of mystical union common to many Eastern and Western traditions. Some have compared Plotinus' teachings to the Hindu school of Advaita Vedanta (advaita "not two," or "non-dual").

With the idea of God's Creation of the universe, the concept of man as a microcosm flourished in Scholasticism. Thomas Aquinas explained that man exists in a level between the angelic and the animal realm, or between the spiritual and physical realm. In other words, he conceived the human being as a microcosm that encapsulates the entire cosmos by containing both spirituality and materiality.

With the rise of Platonism and Hermeticism during the Renaissance period, the idea of the correspondence between microcosm and macrocosm was discussed by various authors such as Nicholas of Cusa (1401– 1464), Giordano Bruno (1548 – 1600), and Giambattista della Porta (1535? -1615).

The macrocosm/microcosm schema was also developed further by the Swiss physician and alchemist Paracelsus, who proposed that within man was an inner heaven with stars. Paracelsus's philosophy of correspondences was based upon the belief that for every ailment and illness in Man (the microcosm) there existed a cure in nature (the macrocosm).

The English physician and alchemist Robert Fludd (1574-1637) expicitly based his work Utriusque Cosmi Historia (The history of the two worlds) upon the macro/micro correspondence, as does Sir Thomas Browne in his binary Discourses of 1658. His Hydriotaphia, Urn Burial depicts the small, temporal world of man, whilst The Garden of Cyrus represents the macrocosm, in which the ubiquitous and eternal quincunx pattern is discerned in art, nature and the Cosmos.

Leibniz (1646 – 1716) developed a metaphysics that explained the universe as the composite of an infinite number of non-spatial unit called "monads" which exist in harmony. Each monad is like a microcosm and it "reflects" the entire universe.