Dugong is the common name for a large, herbivorous, fully aquatic marine mammal, Dugong dugon, characterized by gray-colored, nearly hairless skin, paddle-like forelimbs, no hind limbs, a fluke-like (forked) tail, a sharply downturned snout, and tusks. The dugong is only living representative of the once-diverse family Dugongidae; its closest modern relative, Steller's sea cow (Hydrodamalis gigas), was hunted to extinction in the eighteenth century. The dugong is found in Indo-Pacific waters from eastern Africa to southeast Asia.

Dugongs are part of the order Sirenia along with manatees, both of which are sometimes known as "sea cows" for their grazing of vegetation. The dugong is heavily dependent on seagrasses for subsistence. A "cultivation grazer," it feeds on the seagrass in a manner that actually promotes regrowth of the seagrass, though aerating the sea floor and increasing the amount of organic matter in the area.

The dugong has been hunted for thousands of years for its meat, fat, oil, hides, and bones. However, their significance to humans goes beyond such physical values to cultural significance for the indigenous peoples throughout the dugong's range. The dugong also has an ecological function as part of marine food chains, although its large size means adults have few predators, these being such as sharks, killer whales, and saltwater crocodiles.

Despite these values, the dugong faces many risks from such anthropogenic (human caused) factors as habitat destruction, pollution, hunting, fishing-related fatalities, and collisions with boats and propellers as they surface for air. With its long lifespan and slow rate of reproduction, the dugong is especially vulnerable to these types of exploitation. The dugong's current distribution is reduced and disjunct, and many populations are close to extinction. The IUCN lists the dugong as a species vulnerable to extinction, while the Convention on International Trade in Endangered Species limits or bans the trade of derived products based on the population involved. The dugong population is predicted to enter a steep decline. However, many scientists are working to prevent this potentially cataclysmic blow to the entire dugong population. Currently, this effort is proving futile, as the dugong population is not showing any increased population numbers.

The dugong is a large marine mammal which, together with the manatees, is one of four living species of the order Sirenia. Sirenians are one of four groups of marine mammals, the others being cetaceans (whales, dolphins, and porpoises), sea otters, and pinnipeds (walruses, earless seals, and eared seals). The sirenians and cetaceans are completely aquatic, while pinnipeds spend considerable time on land, including giving birth and raising their young, and sea otters can mate and raise their young entirely at sea. Sirenia is thought to have evolved from four-legged land mammals over 60 million years ago, with the closest living relatives being the Proboscidea (elephants) and Hyracoidea (hyraxes) (Domning 1994). The dugong is the only strictly-marine herbivorous sirenian, as all species of manatee utilize freshwater to some degree.

Like all modern sirenians, the dugong has a fusiform body with no dorsal fin or hindlimbs, instead possessing paddle-like forelimbs used to maneuver itself. The main visual difference between manatees and dugongs are the tails. A manatee tail is paddle-shaped, while a dugong tail is forked, similar in shape to that of a whale of dolphin. The paddle-like forelimbs aid in movement and feeding, while its fluked tail provides locomotion through vertical movement. The dugong also possesses a unique skull and teeth (Myers 2002). 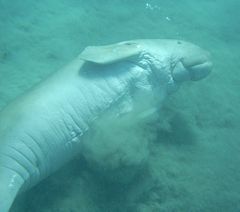 Dugong on the sea floor at Marsa Alam, Egypt.

The dugong has thick, smooth skin that is a pale cream color at birth but darkens dorsally and laterally to a brownish to dark gray color with age (Fox 1999). The body is sparsely covered in short hair, a common feature among sirenians, which may allow for tactile interpretation of their environment (Reep et al. 2002). The teats are located just behind the forelimbs, similar to their location in elephants. Like the Amazonian manatee, the dugong lacks nails on its forelimbs. The dugong's snout is sharply downturned, an adaptation for grazing and uprooting benthic seagrasses.

Unlike the manatees, the dugong's teeth do not continually grow back via horizontal tooth replacement (Self-Sullivan 2007). The dugong has two incisors (tusks) which grow posteriorly until puberty, after which they first erupt in males. The female's tusks continue to grow posteriorly, often not externally evident, but sometimes erupting later in life after reaching the base of the premaxilla (Marsh 1989). The full dental formula of dugongs is:

Like other sirenians, the dugong experiences pachyostosis, a condition in which the ribs and other long bones are unusually solid and contain little or no marrow. These heavy bones, which are among the densest in the animal kingdom (Waller et al. 1996), may act as a ballast to help keep sirenians suspended slightly below the water's surface (Myers 2000).

The word "dugong" derives from the Tagalog term dugong, which was in turn adopted from the Malay duyung, both meaning "lady of the sea" (Winger 2000). Other common local names include "sea cow," "sea pig," and "sea camel" (Reeves et al. 2002).

The dugong was first classified by Müller in 1776 as Trichechus dugon (PD 2008a), a member of the manatee genus previously defined by Linnaeus (PD 2008b). It was later assigned as the type species of Dugong by Lacépède (PD 2008c) and further classified within its own family by Gray (PD 2008d), and subfamily by Simpson (PD 2008e).

The dugong is the only sirenian in its range, which spans the waters of at least 37 countries throughout the Indo-Pacific, from Africa to the Philippines and the South China and East China Seas, where sea grasses are found (Marsh et al. 2002; Grzimek et al. 2004). However, the majority of dugongs live in the northern waters of Australia between Shark Bay and Moreton Bay (Lawler et al. 2002).

The dugong is heavily dependent on seagrasses for subsistence and is thus restricted to the coastal habitats where they grow, with the largest dugong concentrations typically occurring in wide, shallow, protected areas such as bays, mangrove channels, and the lee sides of large inshore islands (Marsh et al. 2002).

Remaining populations of dugong are greatly reduced, although they once covered all of the tropical South Pacific and Indian Oceans. Their historic range is believed to correspond to that of certain seagrasses (Marsh et al. 2002). Groups of 10,000 or more are present on the Great Barrier Reef of Australia, at Shark Bay, and in Torres Strait south of New Guinea. Before 1970, it is thought that large populations were also present in Mozambique and coastal Kenya, but these have dwindled. Palau also has a small population.

Moreton Bay in Brisbane, Australia is one of many homes to the dugong because it contains clean, clear water at the appropriate depth ranges, suitable food, and access to the sea for warmth. Although strong tidal currents affect the exact times and durations of each visit to the bay, the dugong return for protection from large sharks. This area is very important to the future of the dugong—it is a 200 km stretch of high density human habitation and recreation, with ease of access to study and learn how to best protect the remaining herds.

A small number of dugongs are also found in the Straits of Johor, (which separates Johor in Malaysia and Singapore), in the Philippine provinces of Palawan, Romblon, Guimaras, Arabian Sea along Pakistan, and Davao Oriental, and in the Red Sea in Egypt provinces Marsa Alam at Marsa Abu Dabbab.

An endangered population of 50 or fewer dugongs survives around Okinawa (Galvin). 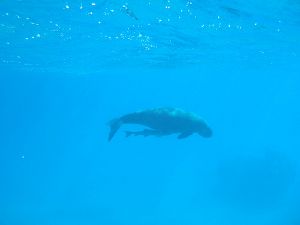 Dugongs are particular about their diets, with certain "fields" of sea-grass cropped. Dugongs commonly are referred to as "sea cows" because their diet consists mainly of the leaves and roots of sea-grass. An adult eats about 30 kilograms of seagrass each day (EPA 2007).

Unlike manatees, dugongs are exclusively benthic feeders. The muscular snouts of dugongs are more dramatically tapered than those of manatees. Their primary feeding mechanism is uprooting sea-grass by digging furrows in the seafloor with their snouts. Dugons are known as "cultivation grazers," since they feed in a manner that promotes growth of the seagrass; pulling out the seagrass in a way that aerates the sea floor and increases the amount of organic matter in the area, therefore promoting regrowth of the seagrass (EPA 2007.

Dugongs in Moreton Bay, Australia are omnivorous since they choose to eat invertebrates such as polychaetes when the supply of their choice grasses decreases (Berta et al. 2006). 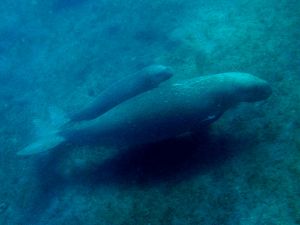 Because of their large size, they do not have many natural predators. These include sharks, killer whales, and saltwater crocodiles.

During the winter, a few herds of dugongs will move to warmer places in the northern countries, such as bays and canals. Dugongs also live in warmer waters of many other countries near the equator. Gestation in the dugong lasts around 13 months, and results in the birth of a single young. The calf is not fully weaned for a further two years, and does not become sexually mature until the age of 8 to 18, longer than in most other mammals. They give birth to a calf only once every three to five years, depending on the suitability of the food source (EPA 2007). As a result, despite the longevity of the dugong, which may live for seventy years or more (EPA 2007), females give birth only a few times during their life, and invest considerable parental care in their young (Anderson 1984).

The primary social unit is the female with her calf. Dugongs may form large foraging herds, from tens to hundreds of individuals (Grzimek et al. 2004). 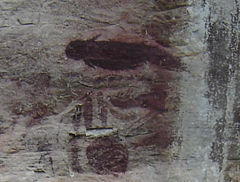 There is a 5000-year old wall painting of a dugong, apparently drawn by neolithic peoples, found in Tambun Cave of Ipoh city in the state of Perak, Malaysia. This dugong image, together with some thirty other images, were painted using haematite, a type of red coloring easily available in the area to ancestors of the Orang Asli living in and around Tambun.

It is possible that the dugong or manatee could be source for the origin of the mermaid myth. When seen from above, the top half of a dugong or manatee can appear like that of a human woman. Coupled with the tail fin, this produced an image of what mariners often mistook for an aquatic human.

During the Renaissance and the Baroque eras, dugongs were often exhibited in wunderkammers. They were also presented as Fiji mermaids in sideshows.

The dugong is referred to in the Bible by the phrase "sea cow" in several places in Exodus (for example, 25:5 and 26:14) and in Numbers. Dugong hides may have been used in the construction of the Tabernacle, if dugong is an accurate translation of the biblical animal tachash.

Worldwide, only a few dugongs are held in captivity, including in Japan, Singapore, and Australia.

Dugons face a number of risks, from hunting, habitat destruction, and collisions. Dugongs are hunted for food throughout their wildlife range, usually for their meat, blubber, and hides. Also, the seagrass beds which the dugong depend on for food are threatened by eutrophication caused by agricultural and industrial runoff. Due to their shallow water feeding habits and surfacing for air, dugong are frequently injured or killed by collisions with motor vessels.

Around the waters of Papua New Guinea, natives have been known for hunting dugongs. However, they also hunt dugong's predators, such as sharks.