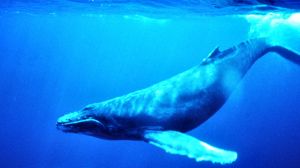 A humpback whale (Megaptera novaeangliae), a member of order Cetacea

A marine mammal is any of a diverse group of aquatic or semi-aquatic mammals that spend a considerable portion of their time in marine waters and depend on the ocean for food. There are four main groups of marine mammals: Cetaceans (whales, dolphins, and porpoises), sirenians (manatees and dugong), pinnipeds (earless seals, eared seals, and walruses), and several otters (the sea otter and marine otter). Some also include the polar bear with the marine mammals because polar bears spend many months of the year on the frozen sea, hunting from sea ice. They also are proficient swimmers.

The cetaceans and sirenians are completely aquatic. Sea otters, although they can walk on land, can mate and raise their young entirely at sea. The pinnipeds spend considerable time on land, including giving birth and raising their young. There are about 120 species that are classified as marine mammals.

Marine mammals are highly recognizable charismatic megafauna, meaning they are large animals with widespread popular appeal that are used by some in the environmental community use to achieve conservation goals well beyond just those species. Despite this, many populations are vulnerable or endangered due to a history of commercial exploitation for blubber, meat, ivory and fur. Most species are currently protected from commercial exploitation. 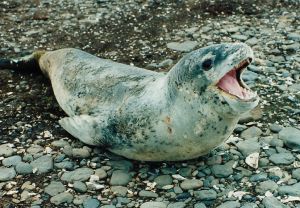 A leopard seal (Hydrurga leptonyx), a member of suborder Pinnipedia of order Carnivora 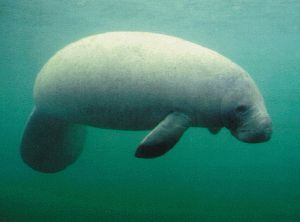 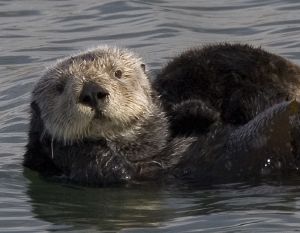 A sea otter (Enhydra lutris), a member of family Mustelidae A polar bear (Ursus maritimus), a member of family Ursidae 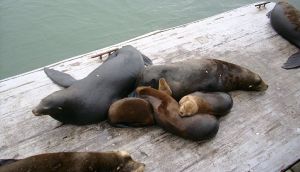 As with all mammals, the marine mammals are characterized by the presence of hair and mammary glands, which in females produce milk for the nourishment of young. All are warm-blooded, breathe in air utilizing lungs, bear their young alive, and suckle them on their own milk. Some, such as the whales, have very limited hair, reducing drag in the water. Instead, they maintain internal temperatures with a thick layer of blubber (vascularized fat). However, the sea otter, unlike most marine mammals, has as a primary form of insulation an exceptionally thick coat of fur, the densest in the animal kingdom.

Marine mammals are considered to have evolved from land dwelling ancestors and share several adaptive features for life at sea. These adaptations include generally large size, hydrodynamic body shapes, modified appendages, and various thermoregulatory adaptations. Different species are, however, adapted to marine life to varying degrees. The most fully adapted are the cetaceans and the sirenians, whose entire life cycle takes place under water, whereas the other groups spend at least some time on land.

The polar bear is often regarded as a marine mammal because it spends many months of the year in a marine environment, albeit a frozen one. (Stirling 1988). It can hunt consistently only from sea ice and spends much of the year on the frozen sea. Its preferred habitat is the annual sea ice covering the waters over the continental shelf and the Arctic inter-island archipelagos. The polar bear tends to frequent areas where sea ice meets water, such as polynyas and leads (temporary stretches of open water in Arctic ice), to hunt the seals that make up most of its diet (Stirling 1997). When the polar bear does swim in the open sea, it is extremely proficient and has been shown to cover 74 kilometers in a day. For such reasons, it is often considered a marine mammal.

The sirenians and cetaceans are thought to be descendant from an ungulate ancestor, while the pinnipeds, otters, and polar bear are descended from a caniform ancestor. The morphological similarities between these diverse groups are considered to be a result of convergent and parallel evolution.

There are some 120 extant species of marine mammals, generally sub-divided into the five groups bold-faced below, if polar bears are included (Hoelzel 2002).

Some of the primary differences between marine mammals and other marine life are:

Considerable research has been conducted on the incidence of diseases that afflict marine mammals in the marine environment. This work has addressed leptospirosis, phocine herpesvirus, neurological diseases, toxicology (Lavery et al. 2008), and other pathologies affecting marine mammals. Entire research organizations have developed such as the Marine Mammal Center to focus upon the rehabilitation and research functions of marine mammals.