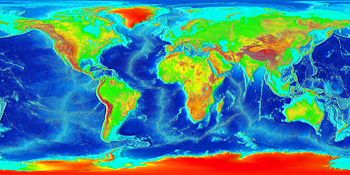 ██ Continental shelf areas of the world, highlighted in cyan.

Continental shelves are commercially exploited for the ores and fossil fuels that can be extracted from them, and the waters above the shelves provide a wealth of seafood.

The width of the continental shelf varies considerably, with some areas having virtually no shelf at all. The average width of continental shelves is about 80 kilometers (km) (50 miles (mi)). The depth of the shelf also varies, but it is generally limited to water that is shallower than 150 meters (m) (490 feet (ft)).[1] The slope of the shelf is usually quite low, on the order of 0.5 degrees. Its vertical relief is also minimal, at less than 20 m (65 ft).[2]

The character of the shelf changes dramatically at the shelf break, where the continental slope begins. With a few exceptions, the shelf break is located at a remarkably uniform depth of roughly 140 meters (m) (460 feet (ft)). This feature is likely a hallmark of past ice ages, when sea level was lower than what it currently is.[4]

The continental slope is much steeper than the shelf; the average angle is three degrees, but it can be as low as one degree or as high as ten degrees.[5] The slope is often cut by submarine canyons, features whose origin was mysterious for many years.[6]

Although the continental shelf is treated as a physiographic province of the ocean, it is not part of the deep ocean basin proper but corresponds to the flooded margins of the continent.[8] Passive continental margins, such as most of the Atlantic coasts, have wide and shallow shelves, made of thick sedimentary wedges derived from long erosion of a neighboring continent. Active continental margins have narrow, relatively steep shelves, due to frequent earthquakes that move sediment to the deep sea.[9]

Some coastlines are almost devoid of a continental shelf, particularly in places where the forward edge of an advancing oceanic plate dives beneath the continental crust in an offshore subduction zone. Examples of this feature have been found off the coast of Chile and the west coast of Sumatra. By contrast, the Siberian Shelf in the Arctic Ocean is the largest shelf, stretching to a width of 1500 km (930 mi). The South China Sea lies over another extensive area of continental shelf, the Sunda Shelf, which joins Borneo, Sumatra, and Java to the Asian mainland. Other familiar bodies of water that overlie continental shelves are the North Sea and Persian Gulf.

Continental shelves are covered by terrigenous sediments, that is, sediments derived from erosion of the continents. However, only a minor portion of the sediments can be traced to material carried by present-day rivers. About 60-70 percent of the sediment on the world's continental shelves is relict sediment, deposited during the last ice age, when the sea level was 100-120 meters lower than it currently is.[10]

Sediments usually become increasingly fine with distance from the coast. Sand is limited to shallow, wave-agitated waters, while silt and clays are deposited in quieter, deep water, far offshore.[11] These shelf sediments accumulate at an average rate of 30 centimeters (cm) per 1,000 years, with a range from 15-40 cm.[12] Though slow by human standards, this rate is much faster than that for deep-sea pelagic sediments.

Given that sunlight is available in shallow waters, continental shelves teem with life. By comparison, the abyssal plains of the oceans are biotic deserts. The pelagic (water column) environment of the continental shelf constitutes the neritic zone, and the benthic (sea floor) province of the shelf is the sublittoral zone.[13]

The shelves are usually fertile, but if anoxic conditions in the sedimentary deposits prevail, the shelves may, over geologic time, become sources of fossil fuels.

Given this background, nations with open coastlines have claimed sovereign rights over their continental shelves up to 350 nautical miles from the coast. To institute their claims, various marine nations signed the Convention on the Continental Shelf drawn up by the U.N. International Law Commission in 1958, which was partly superseded by the 1982 United Nations Convention on the Law of the Sea.[14]