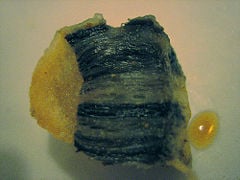 Blubber is a thick, dense layer of highly organized connective tissue with a lot of fat cells found under the skin of all cetaceans (whales, dolphins, and porpoises), pinnipeds (walruses, earless seals, and eared seals), and sirenians (manatees and dugongs). Of the four groups of marine mammals, only the sea otters lack blubber. Polar bears, which some also include with the marine mammals, also have blubber. Blubber provides insulation for these warm-blooded animals, as well as functions as an energy reserve and streamlines the body, while the elastic fibers contained in blubber may help in swimming.

This adaptation of blubber, which is so important for marine mammals, also has been of historical importance for humans. People in northern regions have relied upon it as a high-energy food and the rich oil obtained from blubber was a key reason for the whaling trade. Oil form blubber was used as fuel for lamps, used in making candles, and employed in the manufacture of soap, cosmetics, machinery lubricants, and so forth.

Blubber is composed of connective tissue fibers and vascularized fat found between the muscles and skins of particular marine mammals. The connective tissue is made of collagen, as is found in human connective tissue. Lipid-rich, collagen fiber-laced blubber comprises the hypodermis (Struntz et al. 2004), the lowermost layer of the integumentry system in vertebrates, lying immediately below the dermis of the vertebrate skin. The hypodermis consists primarily of loose connective tissue and lobules of fat, and typically has larger blood vessels and nerves than in the dermis. Blubber covers the whole body, except for parts of the appendages, and is strongly attached to the musculature and skeleton by highly organized, fan-shaped networks of tendons and ligaments. Blubber is more vascularized, or rich in blood vessels, than other adipose tissue.

Blubber can range from a couple of inches thick in dolphins and smaller whales, to up to 4.3 inches (11 centimeters) thick in polar bears (Stirling and Guravich 1988; SW/BG 2002b), to more than a foot thick in some bigger whales, such as right and bowhead whales. However, this thicker layer of blubber is not indicative of larger whales' ability to retain heat better, as the thickness of a whale's blubber does not significantly affect heat loss. More indicative of a whale's ability to retain heat is the water and lipid concentration in blubber, as water reduces heat retaining capacities, and lipid increases them (Kvadsheim et al. 1996).

Blubber serves several different functions. It is the primary location of fat on some mammals, and is essential for storing energy. When food resources are scarce, these layers of blubber with their fat deposits can be used for food and replaced when food is more easily obtained. Blubber is particularly important for species that feed and breed in different parts of the ocean. During these, periods the species are operating on a fat-based metabolism.

Blubber is, however, different from other forms of adipose tissue in its extra thickness, which allows it to serve as an efficient thermal insulator, making blubber essential for thermoregulation, particularly in marine mammals in extreme cold environments. Since heat loss is greater in water than in air, it is vital that warm-blooded animals in cold aquatic environments have a means to retrain heat. Blubber helps to insulate them from the cold. In the bottlenose dolphin, which has a core temperature of about 98.4°F (36.9°C), a heat gradient is seen throughout the blubber to the skin (Ridgway 1972).

Blubber has advantages over fur (as in sea otters) in the respect that although fur can retain heat by holding pockets of air, the air pockets will be expelled under pressure (while diving). Blubber, however, does not compress under pressure. It is effective enough that some whales can dwell in temperatures as low as -40 degrees Fahrenheit. While diving in cold water, blood vessels covering the blubber constrict and decrease blood flow, thus increasing blubber's efficiency as an insulator (Galbraith et al. 2001).

Another function of blubber is as an aid in buoyancy, as blubber helps to keep marine mammals buoyant. It also act to streamline the body, because the highly organized, complex collagenous network supports the non-circular cross sections characteristic of cetaceans.

Blubber also may save further energy for marine mammals such as dolphins in that it aids swimming by adding a bounce to the movement. The blubber between the tail flukes and a dolphin's top dorsal fin is crosshatched with elastic fibers that add a spring to the dolphin's strokes. Essentially, the animal is bouncing on a blubber spring, decreasing the amount of energy needed to swim fast (Hirshon and Pabst 2000).

Research into the thermal conductivity of the common bottlenose dolphin's blubber reveals that its thickness varies greatly amongst individuals (Dunkin et al. 2005). However, blubber from emaciated dolphins is much worse of an insulator than that of non-pregnant adults, which in turn have a higher heat conductivity than blubber from pregnant females and pre-adults. Maternal care is extremely important to the survival of offspring that need to develop a thick insulating layer of blubber. The milk from the mammary glands of marine mammals often exceeds forty to fifty percent fat content to support the development of blubber in the young.

Blubber has been used extensively by people for fool and fuel, among other purposes.

Blubber provides a high-energy food. Muktuk, the Inuit/Eskimo word for blubber, formed an important part of the traditional diets of the Inuit and other northernly peoples because of its high energy value (Smith 2009). Seal blubber also has large amounts of vitamin E, selenium, and other antioxidants that hinder oxidation, thus slowing the formation of the free radicals that start a wide variety of diseases. The possible positive effects of consuming blubber may be seen in Greenland; in Uummannaq for example, a hunting district with 3000 residents, no deaths due to cardiovascular diseases occurred in the 1970s. However, emigrants to Denmark have contracted the same diseases as the rest of the population. Mulvad and Pedersen (1992) report that the average 70-year-old Inuit with a traditional diet of whale and seal has arteries as elastic as that of a 20-year-old Danish resident (Mulvad and Pedersen 1992).

One of the major reasons for the whaling trade was the collection of whale blubber. This was rendered down into oil in try pots or later, in vats on factory ships. This rich oil could be then used in the manufacture of soap, leather, and cosmetics (Donovan 2008). Whale oil was also used in candles as wax, and in oil lamps as fuel, and as lubricants for machinery.

Blue whales can yield blubber harvests up to 50 tons.

Studies of blubber in recent years suggest that blubber contains naturally occurring PCB, which are cancer causing and damage the human nervous, immune, and reproductive systems (WHOI 2005). It is not known where the source of this PCB is. Since toothed whales typically place high on the food chain, they are bound to consume large amounts of industrial pollutants. Even baleen whales, by merit of the huge amount of food they consume, are bound to have toxic chemicals stored in their bodies. Recent studies have found high levels of mercury in the blubber of seals of the Canadian Arctic.