Polychaete or polychete is any of the diverse, mostly marine segmented worms of the annelid class Polychaeta, characterized by having most segments with one pair of lateral, fleshy, lobelike appendages called parapodia, with numerous bristles (setae) projecting from them. The fact that segments have bundles of setae have led to polychaetes sometimes being referred to as bristle worms. Some sessile forms may have the parapodia reduced or absent (Pardo 2004).

Polychaeta is a very large and diverse class, with more than 10,000 described species. They range in length from less than two millimeters to greater than three meters, and include mobile and sessile forms, and pelagic, surface dwelling, and benthic forms, including burrowers and tube dwellers. Feeding behaviors include raptorial (carnivorous, herbivorous, omnivorous, scavenger), deposit feeding, filter feeding, and suspension feeding. Some forms are brightly colored. Common representatives include the lugworm (Arenicola marina) and the sandworm or clam worm (Nereis).

Polychaetes are found worldwide, in all marine habitats, from polar to tropical regions, and some live in freshwater or brackish environments; a few inhabit land environments that are completely inundated with water (Pardo 2004).

Because of their abundance in marine environments, polychaetes play an important role in marine food chains, and are preyed upon by other invertebrates, fish, and birds. Those polychaetes that are part of the benthos not only are important in benthic food chains, but also help in the recycling of organic matter. For humans, polychaetes are used as bait for recreational fishing and as indicators for monitoring the health of environments. The striking colors, iridescent forms, and unique shapes of some species add greatly to the wonder of nature. 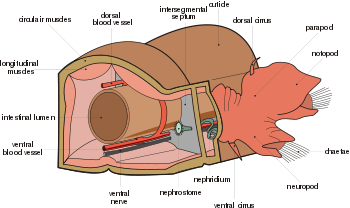 General anatomy of a polychaete

Typically, each body segment between the head and the tail (the trunk) has a pair of fleshy, lateral protrusions called parapodia. These parapodia bear many bristles, called setae (chaetae), which are made of chitin. The parapodia may be uniramous (with one branch) or biramous (with two branches), the later having an upper division or dorsal lobe (notopodium) and lower division or ventral lobe (neuropodium). In some sessile forms that live in tubes or permanent burrows, the parapodia may be reduced or absent (Pardo 2004). 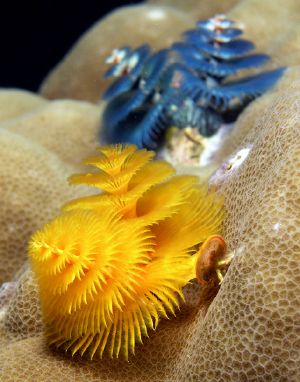 The polychaetes' paddle-like and highly vascularized parapodia are used for movement and act as the annelid's primary respiratory surfaces. (Parapodia can be thought of as kinds of external gills that are also used for locomotion.) The chitinous setae may be used for such purposes as to help the worm move, by fixing the non-moving sections of the worm in place, or by excreting poison for self-defense (Carmack).

The length of polychaetes range from less than 0.078 inches (less than two millimeters) to greater than 9.8 feet (greater than three meters). Most are less than 3.9 inches (ten centimeters) and between 0.078 to 0.39 inches (two to ten millimeters) wide (Pardo 2004). Most are elongated and cylindrical, with many segments, but they may also be short, compact, and with few segments.

The body of polychaetes varies from light tan to opague, including red, pink, green, yellow, and combinations of colors (Pardo 2004). Some forms are iridescent or luminescent.

Polychaetes can regenerate such body parts as tentacles, parapodia, cirri, and palps, as well as posterior ends. Such regeneration is used by many polychaetes during asexual reproduction, as new individuals develop from an isolated fragment or a bud that grows from an individual. The majority of polychaetes are sexually reproducing and are dioecious (with male or female sexual parts), with hermaphroditism in only a few species (Pardo 2004).

Polychaetes are found worldwide, mostly in marine environments, but also include some species that live in brackish and freshwater environments. A few groups have evolved to live in terrestrial environments, like Namanereidinae with many terrestrial species, but these are restricted to inundated or humid areas. Some of these have cutaneous invaginations for aerial gas exchange.

In marine environments, polychaetes are found from the intertidal zone to the deepest depths of the ocean, and from the polar regions to tropical regions (Pardo 2004). One notable polychaete, the Pompeii worm (Alvinella pompejana), is endemic to the hydrothermal vents of the Pacific Ocean. Pompeii worms are thought to be the most heat-tolerant complex animals known.

Polychaetes occupy a wide variety of habitats. Some live among the plankton, having adaptations to swim and spending their lives in the water column. Most burrow or build temporary or permanent tubes on the bottom, or crawl on the surface of the substrate. Some live in the surface area of the water. They are found in reefs, crevices of rocks, and so forth. Although most are free-living, a few are parasitic, and some live as commensals, associating with another animal either for attachment, protection, or food (Pardo 2004). 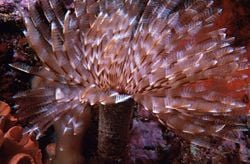 The mobile forms or Errantia tend to have well-developed sense organs and jaws, while the Sedentaria (or stationary forms) lack them but may have specialized gills or tentacles used for respiration and deposit or filter feeding, e.g., fanworms.

Polychaetes include such remarkable forms as the recently discovered genus Osedax, which includes the Bone-eating snot flower. Another remarkable polychaete is Hesiocaeca methanicola, which lives on methane clathrate deposits. Lamellibrachia luymesi is a cold seep tube worm that reaches lengths of over three meters and may be the most long lived animal at over 250 years old.

The oldest crown group polychaetes fossils come from the Sirius Passet Lagerstatte, which is tentatively dated to the lower-middle Atdabanian (early Cambrian) (Conway and Peel 2008). Many of the more famous Burgess Shale organisms, such as Canadia and Wiwaxia, may also have polychate affinites. An even older fossil, Cloudina, dates to the terminal Ediacaran period; this has been interpreted as an early polychaete, although consensus is absent (Miller 2004).

Taxonomically, the polychaetes are thought to be paraphyletic, meaning that as a group it contains its most recent common ancestor, but does not contain all the descendants of that ancestor. Groups that may be descended from the polychaetes include the earthworms, the leeches, sipunculans, and echiurans. The Pogonophora and Vestimentifera were once considered separate phyla, but are now classified in the polychaete family Siboglinidae.

Much of the classification below matches Rouse and Fauchald (1998), although that paper does not apply ranks above family.

Older classifications recognize many more (sub)orders than the layout presented here. As comparatively few polychaete taxa have been subject to cladistic analysis, some groups which are usually considered invalid today may eventually be reinstated.