Wombat is the common name for any of the stocky Australian marsupials comprising the family Vombatidae, characterized by short legs, very short tails, large head, and small ears. There are three extant species although the family was more diverse in the Pleistocene (Johnson 2004). The modern species are burrowing herbivores and are found in forested, mountainous, and heathland areas of south-eastern Australia and Tasmania.

Wombats are valued components of the food chains in their Australia ecosystems, eating grasses and other vegetative material, and being preyed upon by dingos and Tasmanian devils. For humans, they do not have a significant positive commercial value, nor do they figure strongly in Aboriginal mythology; however, they are very affectionately regarded in Australia (Johnson 2004). They are the focus of various children's stories and art, and one painter who had pet wombats called them "the most beautiful of God's creatures" (Johnson 2004).

Modern wombats are the culmination of a Vombatidae lineage that traces back millions of years, to the early Miocene, with a number of species present during the Pleistocene, including some very large wombats. Human activities may be largely responsible for the contraction and fragmentation of modern wombats' present ranges, and habitat loss from sheep and cattle raising may be a key causal agent in making one of the three modern species (Lasiorhinus krefftii) extremely rare (Johnson 2004). In 2000, this population was restricted to 116 individuals living in just one area in central Queensland, Australia. It is now being protected. The other two species (Vombatus ursinus, Lasiorhinus latifrons) are not endangered.

While most mammals are placentals, the wombat is a marsupial, belonging to the order (or infraclass) Marsupialia. Unlike placental mammals (Placentalia), almost all marsupials lack the placenta that connects the mother with the developing fetus in the womb. Some marsupials have a rudimentary placenta that functions for only a short time, such as the bandicoot. Marsupial females typically have an external pouch in which the immature young are raised after birth until early infancy. The newborn typically crawl to this pouch after birth, and attach themselves to milk-secreting teats (nipples), and are nursed until they can survive outside the pouch. This time period in the pouch is similar to the later stages of a placental mammal's development in the womb.

Marsupials also differ from placental mammals in their reproductive traits. The female has two vaginas (the tubular tract leading from the uterus to the exterior of the body). Both of the vaginas open externally through one orifice, but lead to different compartments within the uterus. Males usually have a two-pronged penis, which corresponds to the females' two vaginas. The penis only passes sperm. Marsupials have a cloaca (posterior opening that serves as the only such opening for the intestinal and urinary tracts) that is connected to a urogenital sac in both sexes. Waste is stored there before expulsion.

Besides the wombat, well-known marsupials include kangaroos, bandicoots, and opossums. Marsupials are native to Australia, New Guinea, Tasmania, and the Americas. 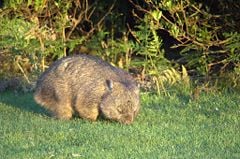 Wombat grazing at dusk in Narawntapu National Park, Tasmania. Tasmania's cooler climate makes all its creatures furrier than their cousins in mainland Australia.

Modern wombats are all thick-set, burrowing herbivores, with short and muscular legs, an insignificant tail, a broad massive head with small ears (Johnson 2004). The common wombat has a naked snout, while the two hairy-nosed wombat species have a hairy covering over the rhinarium, as well as longer pointed ears and finer fur (Johnson 2004). Their fur color can vary from a sandy color to brown, or from gray to black.

The modern wombats are about one meter (39 inches) in size and weigh between 25 and 40 kilograms (55 to 88 pounds). Some fossil wombats were much larger, including Phascalonus gigas that weighted an estimated 200 kilograms and stood a meter high (Johnson 2004).

The incisor teeth of wombats somewhat resemble those of the placental rodents, being adapted for gnawing tough vegetation, as well as for digging tunnels. They have massive jaws that deliver powerful, short chewing strokes, and they have open-rooted teeth that continue to grow throughout their lifetime (Johnson 2004). Like many other herbivorous mammals, they have a large diastema between the incisors and the cheek teeth, which are relatively simple. The dental formula of wombats is:

The large intestine of wombats is large and hosts cellulose-digesting microorganisms, and food is held in their for long periods (seventy hours or longer), allowing breakdown of fiber (Johnson 2004).

Wombats have an extraordinarily slow metabolism, which aids their survival in arid conditions (McIlroy 1984). Along with their slow digestion of food, their slow metabolism means they can spend less time feeding than other grazers of comparable size and thus less time exposed outside their burrows (Johnson 2004).

As adaptations for a digging lifestyle, wombats have a heavy and strong pectoral girdle and broad and massive humerus, resulting in powerful forearms. They also have broad forepaws and strong claws.

The name wombat comes from the Eora Aboriginal community who were the original human inhabitants of the Sydney area. 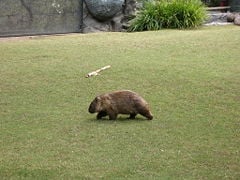 A wombat at the Australia Zoo.

Modern wombats dig extensive burrow systems with rodent-like front teeth and powerful claws. They fling soil behind them, which is moved clear of the burrow as the animal backs up (Johnson 2004). The burrows may be extensive, consisting of 30 meters (98 feet) or more of tunnel length, with several entrances, side tunnels, and resting chambers, and may be wide enough to allow entry by a light-built human being (Johnson 2004). Indeed, many wombat burrows were explored by a 15-year old boy in 1960, who wrote a now-famous article on the adventure, although such explorations are strongly advised against as wombats can cause injury (Johnson 2004). It is not known if extinct wombats were burrowing animals, and the giant wombats do not seem to be as well-adapted for burrowing as the three extant species (Johnson 2004).

Modern wombats tend to be solitary individuals, but many animals may share the same warren, although it appears they occupy different sections (Johnson 2004).

Although mainly crepuscular and nocturnal, feeding at night and resting in their burrows during the day, wombats will also venture out to feed on cool or overcast days. They are not as commonly seen as many animals, but leave ample evidence of their passage, treating fences as a minor inconvenience to be gone through or under and leaving distinctive cubic scat.

Dingos and Tasmanian Devils prey on wombats. When attacked, wombats can summon immense reserves of strength; one defense of a wombat against a predator underground is to crush it against the roof of the tunnel. Its primary defense is its toughened rear hide with most of the posterior made of cartilage. This, combined with its lack of a meaningful tail, makes it difficult for any predator that follows the wombat into its tunnel to bite and injure its target. Wombats generally move slowly, but when threatened they run quite fast for short periods.

Wombats defend home territories centered on their burrows, and react aggressively to intruders. The common wombat occupies a range of up to 23 hectares (57 acres), while the hairy-nosed species have much smaller ranges, of no more than four hectares (ten acres) (McIlroy 1984).

Female wombats give birth to a single young in the spring, after a gestation period lasting about 22 days (Johnson 2004). They have a well-developed pouch, which the young leave after about six to nine months. Wombats are weaned after 15 months, and are sexually mature at 18 months of age (McIlroy 1984).

Wombats, like all the larger living marsupials, are part of the Diprotodontia. The ancestors of modern wombats evolved sometime between 55 and 26 million years ago (no useful fossil record has yet been found for this period).

Among the several rhinoceros-sized giant marsupial species was the largest marsupial to have ever lived, Diprotodon, related to the wombat, being in the same suborder (Vombatiformes) but different family. The earliest human inhabitants of Australia arrived while diprotodons were still common. The Aborigines are believed to have brought about their extinction through hunting, habitat alteration, or probably both.

There are three living species of wombat:[1]

Wombats do not figure strongly in Aboriginal mythology, and lack positive commercial value for humans (they are sometimes regarded as agricultural pests) (Johnson 2004). However, they are very affectionately regarded in Australia, and are the feature in many children's stores, including the Muddle-Headed Wombat series of Ruth Park (Johnson 2004). Painter Dante Gabriel Rossetti called them "the most beautiful of God's creatures" and made a drawing in commemoration to a pet wombat that had died, titled "Self portrait of the artist weeping at the wombat's tomb" (Johnson 2004).

Wombats can be awkwardly tamed in a captive situation, and even coaxed into being patted and held, possibly becoming quite friendly. Many parks, zoos and other tourist set-ups across Australia have wombats on public display, and are quite popular. However, the wombat's lack of fear means that they may display acts of aggression if provoked, or if they are simply in a bad mood. The sheer weight of a wombat makes a charging wombat capable of knocking an average-sized man over, and their sharp teeth and powerful jaws can result in severe wounds. The naturalist Harry Frauca once received a bite two centimeters deep into the flesh of his leg—through a rubber boot, trousers, and thick woollen socks (Underhill, 1993).