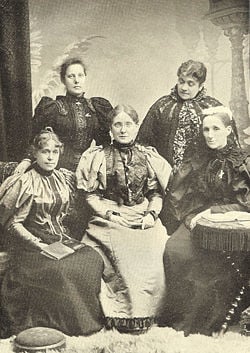 The Woman's Christian Temperance Union (WCTU) is the oldest continuing non-sectarian women's organization in the United States and worldwide. The women of Fredonia, New York are credited with being the first of the women's groups to visit the saloons. Subsequently, on December 22, 1873, they were the first local organization to adopt the name, Women's Christian Temperance Union.

The WCTU perceived alcoholism as a consequence of larger social problems rather than as a personal weakness or failing. Thus, the WCTU was very interested in a number of social reform issues including: labor, prostitution, public health, sanitation, and international peace. As the movement grew in numbers and strength, members of the WCTU also focused on suffrage. The WCTU was very instrumental in organizing women's suffrage leaders and in helping more women become involved in American politics. Suffragists who emerged out of the WCTU used constitutional arguments to support their bid for enfranchisement and cited the Fourteenth Amendment. They claimed that American adult women had the right to vote because they were individuals and were thus entitled to enjoy all the rights of an American individual. By making this argument, suffragists were perceived as less threatening to social order, appealed to American pride and were successful in presenting their message of extending voting rights to all American adults.

The purpose of the WCTU is to combat the influence of alcohol on families and society. Frances Willard, a noted feminist, was its second president. They were inspired by the Greek writer Xenophon who defined temperance as "moderation in all things healthful; total abstinence from all things harmful." In other words, should something be good, it should not be indulged in to excess. Should something be bad for you, it should be avoided altogether—thus their attempts to rid their societal surroundings of what they saw (and still see) as the dangers of alcohol, tobacco, recreational drugs, etc.

The WCTU created a significant response throughout the United States. In 1878, Matilda Bradley Carse became the president of the Chicago branch. During her time as president, Carse founded many charities and managed to raise approximately $10,000–a–year to support them. She started the Bethesda Day Nursery for working mothers, two kindergartens, the Anchorage Mission for erring girls, two dispensaries, two industrial schools, an employment bureau, Sunday schools, and temperance reading rooms. Carse also founded the Woman’s Temperance Publishing Association, a stock company which published written material ranging from books, to brochures and tracks on temperature regarding various social reforms, namely temperance.

The WCTU also formed in Canada in 1874, in Ontario. In 1885 Letitia Youmans founded a nationwide organization which was to become the leading women's society in Canada's temperance movement. An Australian arm commenced operation in Australia in 1882, it was important in both the temperance and women's suffrage movements.

In 1885, WCTU missionary Mary Leavitt went on a tour of New Zealand and helped establish WCTU branches there. Led by Kate Sheppard from 1887, the New Zealand WCTU was a major force behind the campaign for women's suffrage. This resulted in New Zealand women being granted universal suffrage in 1893.

In addition to campaigning against alcohol, the WCTU addressed social ills stemming from drunkenness such as domestic violence. It also campaigned for reforms that would improve the status of women in society, such as the right to vote. The WCTU was a major force in Prohibition-and was also influential in creating laws banning prostitution and recreational drugs in the United States.

Although the WCTU had chapters throughout North America and had hundreds of thousands of members, it did not initially accept Catholic, Jewish, or African-American women, or women who had not been born in North America. Today that is no longer the case. In fact, today men may also join the organization as honorary members.

In contrast to the WCTU's stated aims, not all large-scale Christian groups and movements believe the consumption of alcohol to be inconsistent with practice of Christianity.

The main requirements for joining the WCTU include signing a pledge of abstinence from alcohol and paying membership dues.

Current issues for the WCTU include alcohol, which the organization considers to be North America's number one drug problem, illegal drugs, abortion, and gay marriage. The WCTU has warned against the dangers of tobacco since 1875. They continue to this day in their fight against those substances which they see as harmful to society. The WCTU strongly supports banning same-sex marriage, which it sees as a negative influence on families; in general it is opposed to gay rights.[1]

The WCTU publishes a quarterly journal entitled The Union Signal; the journal's main focus is as a digest of current research and information on drugs.[2]