Women's History Month is an annual declared month that highlights the contributions of women to events in history and contemporary society. It is celebrated during March in the United States, the United Kingdom, and Australia, corresponding with International Women's Day on March 8, and during October in Canada, corresponding with the celebration of Persons Day on October 18.

The commemoration began in 1978 as "Women's History day" in Sonoma County, California, championed by Gerda Lerner and the National Women's History Alliance. It was then recognized as a national week (1980) and then month (1987) in the United States, and finally spreading internationally.

Although women have always made up at least half of the world's population, their place in society has, for most of history, been lower than that of men, relegated primarily to supporting their husbands and raising their children. Their contributions to society have likewise been less recognized. Women's History Month is an attempt to redress that balance, bringing an awareness and appreciation of the vital roles women have played, not just on the family level, but in the advancement of society as a whole. 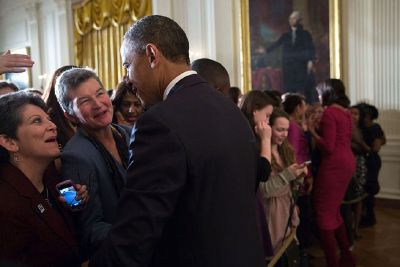 In the United States, Women's History Month traces its beginnings back to the first International Women's Day in 1911. In 1978, the school district of Sonoma, California participated in Women's History Week, an event designed around the week of March 8 (International Women's Day). In 1979, a fifteen-day conference about women's history was held at Sarah Lawrence College from July 13 until July 29, chaired by historian Gerda Lerner.[3][4] It was co-sponsored by Sarah Lawrence College, the Women's Action Alliance, and the Smithsonian Institution.[3] When its participants learned about the success of the Sonoma County's Women's History Week celebration, they decided to initiate similar celebrations within their own organizations, communities, and school districts. They also agreed to support an effort to secure a National Women's History Week.[2]

From the first settlers who came to our shores, from the first American Indian families who befriended them, men and women have worked together to build this nation. Too often the women were unsung and sometimes their contributions went unnoticed. But the achievements, leadership, courage, strength and love of the women who built America was as vital as that of the men whose names we know so well. As Dr. Gerda Lerner has noted, "Women’s History is Women’s Right." It is an essential and indispensable heritage from which we can draw pride, comfort, courage, and long-range vision. I ask my fellow Americans to recognize this heritage with appropriate activities during National Women’s History Week, March 2–8, 1980. I urge libraries, schools, and community organizations to focus their observances on the leaders who struggled for equality – Susan B. Anthony, Sojourner Truth, Lucy Stone, Lucretia Mott, Elizabeth Cady Stanton, Harriet Tubman, and Alice Paul. [5]

State departments of education also began to encourage celebrations of Women's History Month as a way to promote equality among the sexes in the classroom.[7] Maryland, Pennsylvania, Alaska, New York, Oregon, and other states developed and distributed curriculum materials in all of their public schools, which prompted educational events such as essay contests. Within a few years, thousands of schools and communities began to celebrate of Women's History Month. They planned engaging and stimulating programs about women's roles in history and society, with support and encouragement from governors, city councils, school boards, and the U.S. Congress.

President Clinton established the Commission on the Celebration of Women in American History to consider how best to acknowledge and celebrate the roles and accomplishments of women in American history. [9] Their recommendations on how to honor the contributions of women were reported to the President on November 15, 2000.[10]

In March 2011, the Obama administration released a report, Women in America: Indicators of Social and Economic Well-Being, showing women's status in the U.S. in 2011 and how it had changed over time.[11] This report was the first comprehensive federal report on women since the report produced by the Commission on the Status of Women in 1963.

Supporting Women's History Month, a number of organizations have grown and developed. Established in 1995, the 75th anniversary of "one of the longest, most successful, and in some respects most radical challenges ever posed to the American system of electoral politics"[12] the victory for women's suffrage, the National Women's History Museum (NWHM) is an organization that works to ensure that women's voices and experiences are permanently included in mainstream culture. It began with a White Paper written to express the fact that women's history was largely missing from this nation’s Capital, including the Smithsonian Institution which at that time was planning a Native American and an African American culture museum. Today, the NWHM serves as an important catalyst for human progress worldwide.[13]

The National Women's History Alliance, formerly known as the National Women's History Project which submitted the initial petition for the recognition of Women's History Month, is a national clearinghouse providing information and training in multicultural women’s history for educators, community organizations, and parents-for anyone wanting to expand their understanding of the historic contributions of women. Each year a different theme is chosen, capturing the spirit of the contemporary age and highlighting the contributions of women that provide hope for the future. The theme for 2022, "Women Providing Healing, Promoting Hope," was chosen as "both a tribute to the ceaseless work of caregivers and frontline workers during this ongoing pandemic and also a recognition of the thousands of ways that women of all cultures have provided both healing and hope throughout history."[14]

Women's History Month in Canada is a time to celebrate the amazing women in Canadian history.[15] It was established in 1992 when a group of women in Victoria, British Columbia, led by Lyn Gough, sought to establish a Women's History Month in Canada to encourage greater appreciation of the notable contributions of women to Canadian history. October was selected to coincide with the celebration of the anniversary on October 18 of the 1929 decision of the court case Edwards v. Canada, more commonly known as the Persons Case, in which it was established that Canadian women were eligible to be appointed senators and in general had the same rights as Canadian men with respect to positions of political power.[16]

A variety of events and activities are suggested to mark the celebration,[15] and an online site provides information regarding significant women in Canadian history.[17]

Initiated in 1999, with the first celebration held in 2000, Women’s History Month Australia was celebrated annually in March to coincide with International Women's Day. The success of Women’s History Month in the USA, a national event since a 1987 resolution of Congress, and in Canada where it was proclaimed in 1992, originally inspired this initiative in Australia.

Women's History Month was initiated by Helen Leonard, convenor of the National Women's Media Centre, working with the Women's Electoral Lobby. It was Helen's vision, drive and commitment, supported by the technical expertise of Gillian Pollack, which made the establishment of WHM in Australia possible. After Helen’s untimely death in 2001, a group of committed women continued and developed the work she had begun.

Since 2005, each WHM highlighted a particular area of women's achievement with a different theme celebrated each year. Organizations, institutions, and community groups were encouraged to use this theme for their own WHM events through promotional material on the website and an online calendar where events were listed. Annual themes included such topics as Musical Belles, Women with a Plan, and Arm in Arm: Indigenous and non Indigenous Women Working Together.[18]

In 2007, the original WHM website was upgraded and renamed the Australian Women’s History Forum (AWHF) to indicate a more interactive role with its membership – one which would operate not only in March but throughout the entire year. A Historians Reference Group, which was established to provide specialist advice and support to WHM, has continued in this role since the inception of the AWHF. The organization of annual Women's History Month celebrations is incorporated as part of the work of the AWHF.

However, the celebration of Women’s History Month remained a series of voluntary endeavors, encouraged and overseen by a small Canberra-based team. In 2014, the AWHF sponsored "Women’s History Month Finale: The Great Debate 2014" on the proposition that "Australia doesn’t need Women’s History Month" in an effort to revive interest in ways to celebrate women's contributions to Australian history.[19] This marked the end of AWHF's official commemorations.

In the United Kingdom, Women's History Month is celebrated throughout the month of March. The London borough of Haringey organizes activities and events throughout the month with the goal of discovering, documenting, and celebrating women's lives and achievements, with the vision of developing a diverse society where everyone's contributions are celebrated and recognized equally.[20]

The BBC provides rich educational resources for teaching in the classroom.[21]

Retrieved from https://www.newworldencyclopedia.org/p/index.php?title=Women%27s_History_Month&oldid=1066019
Categories:
Hidden category:
This page was last edited on 16 March 2022, at 20:29.
Content is available under Creative Commons Attribution/Share-Alike License; additional terms may apply. See Terms of Use for details.