Map of Eritrea, bordered by Ethiopia, Sudan and Djibouti.

The Eritrean War of Independence (September 1, 1961 – May 29, 1991) was a conflict fought between the Ethiopian government and Eritrean separatists, both before and during the Ethiopian Civil War. The war started when Eritrea’s autonomy within Ethiopia, where troops were already stationed, was unilaterally revoked. Eritrea had become part of Ethiopia after World War II, when both territories were liberated from Italian occupation. Ethiopia claimed that Eritrea was part of Ethiopia, especially wanting to maintain access to the Red Sea. Following the Marxist-Leninist coup in Ethiopia in 1974 which toppled its ancient monarchy, the Ethiopians enjoyed Soviet Union support until the end of the 1980s, when glasnost and perestroika started to impact Moscow’s foreign policies, resulting in a withdrawal of help. The war lasted for 30 years until 1991 when the Eritrean People's Liberation Front (EPLF), having defeated the Ethiopian forces in Eritrea, took control of the country. The USA had recently involved itself in peace-making diplomacy, possibly avoiding earlier engagement in this war to prevent escalation of the conflict into another proxy war between the two sides in the Cold War. In April 1993, in a referendum supported by Ethiopia, the Eritrean people voted almost unanimously in favor of independence. Formal international recognition of an independent and sovereign Eritrea followed later the same year. The two main rebel groups fought two Civil Wars during the war of liberation, complicating the situation. Although this war continued for over 30 years and devastated many lives, it did not receive as much publicity as some other conflicts have.

There are never any easy solutions to resolving conflicts between or within nations. However, if the two nations had spent the same energy and resources they used in a 30 year war on education and development instead, the people of both nations would be far better off. Sadly, another costly war broke out in 1998 between these two states, this time over border disputes. This ended in June 2000,

Eritrea was home to various kingdoms, mainly Muslim, from the eighth century, when the Umayyads invaded in 710. Most of these were subject to the authority of the successive Muslim caliphates, or to neighboring Sudanese polities. At times, several small emirates co-existed in what is now Eritrea. For long periods it was under the Ottoman Empire before becoming an Italian colony in 1885 (officially, 1890). The actual name of the state derives from this period of its history. The colony of Eritrea included some land that had been under Egyptian rule. The Italians, however, administered the territory they conquered as a single unit. When they added Ethiopia to their colonial empire in 1935, they created what they called Italian East Africa. Italian Somaliland was also part of this entity. There was a unified administration. Liberated by Allied troops in 1941, Italian East Africa was sub-divided. Ethiopia regained independence. Italian Somaliland remained under Italian rule until 1960 but as a United Nations protectorate, not a colony, when it united with British Somaliland, also granted independence in 1960 to from the independent state of Somali.

Eritrea was made a British protectorate from the end of World War II until 1951, when it was ceded to Ethiopia. Britain had favored partitioning Eritrea, with its Christian areas (roughly 50 percent) becoming part of Ethiopia and its Muslim (roughly 50 percent) areas part of Sudan. Culturally, there were strong ties between segments of the Eritrean population and Ethiopia, and between some segments and Sudan yet other segments did not enjoy close ties with either of these neighboring states. The international community, however, did not think that structures were in place for Eritrea to become a separate nation-state, as it had been part of larger political polities for most of its history. Most recently, it had been linked with Ethiopia under Italian rule. It did not have its own judiciary, educational or administrative systems. Ethiopia agreed that Eritrea would be an autonomous region, with its own Parliament. At the time, many Eritreans wanted independence. The war was provoked when Ethiopia unilaterally dissolved the federal arrangement, revoked autonomy and closed the Eritrean Parliament. Many Eritreans did not regard themselves as Ethiopians; indeed historically the territory had been distinct from its neighbors, although borders in that region were also fluid and people of various clans had relatives on both sides.

During the 1960s, the Eritrean independence struggle was led by the Eritrean Liberation Front (ELF). At first, this group factionalized the liberation movement along ethnic and geographic lines. The initial four zonal commands of the ELF were all lowland areas and primarily Muslim. Few Christians joined the organization in the beginning, fearing Muslim domination. After growing disenfranchisement with Ethiopian occupation, highland Christians began joining the ELF. Typically these Christians were part of the upper class or university-educated. This growing influx of Christian volunteers prompted the opening of the fifth (highland Christian) command. Internal struggles within the ELF command coupled with sectarian violence among the various zonal groups splintered the organization. The war started on September 1, 1961, when Hamid Idris Awate and his companions fired the first shots against the occupying Ethiopian Army and police. In 1962 the Emperor Haile Selassie of Ethiopia unilaterally dissolved the Eritrean parliament and annexed the country.

In 1970, some members of the group fell out with each other and several different groups broke away from the ELF. During this time, the ELF and the groups that would later join together to form the Eritrean People's Liberation Front (EPLF) also engaged in a bitter civil war, which was fought simultaneously with the liberation war, The two organizations were forced by popular will to reconcile in 1974 and participated in joint operations against Ethiopia.

In 1974, Emperor Haile Selassie was ousted in a coup. The new Ethiopian government, called the Derg, was a Marxist military junta led by strongman Mengistu Haile Mariam. With this change of government, Ethiopia came under the influence of the Soviet Union.

Many of the groups that splintered from the ELF joined together in 1977 and formed the EPLF. By the late 1970s, the EPLF had become the dominant armed Eritrean group fighting against the Ethiopian government. The leader of the umbrella organization was Secretary-General of the EPLF Ramadan Mohammed Nur, while the Assistant Secretary-General was Isaias Afewerki. Much of the equipment used to combat Ethiopia was captured from the Ethiopian Army.

During this time, the Derg could not control the population by force alone. To supplement its garrisons, forces were sent on missions to instill fear in the population. An illustrative example of this policy was the village of Basik Dera in northern Eritrea. On November 17, 1970, the entire village was rounded up into the local mosque and the mosque's doors were locked. The building was then razed and the survivors were shot. Similar massacres took place in primarily Muslim parts of Eritrea, including the villages of She'eb, Hirgigo, Elabared, and the town of Om Hajer; massacres also took place in predominately Christian areas as well. 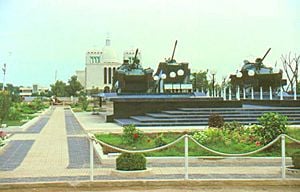 By 1977, the EPLF was poised to drive the Ethiopians out of Eritrea, by utilizing a predetermined, simultaneous invasion from the east by Somalia to siphon off Ethiopian military resources. Then, in a dramatic turnaround, the Derg managed to repulse the Somalian incursion, thanks mainly to a massive airlift of Soviet arms. After that, using the considerable manpower and military hardware available from the Somali campaign, the Ethiopian Army regained the initiative and forced the EPLF to retreat to the bush. This was most notable in the Battle of Barentu and the Battle of Massawa. Between 1978 and 1986, the Derg launched eight major offensives against the independence movements, and all failed to crush the guerrilla movement. In 1988, with the Battle of Afabet, the EPLF captured Afabet and its surroundings, then headquarters of the Ethiopian Army in northeastern Eritrea, prompting the Ethiopian Army to withdraw from its garrisons in Eritrea's western lowlands. EPLF fighters then moved into position around Keren, Eritrea's second-largest city. Meanwhile, other dissident movements were making headway throughout Ethiopia. Throughout the conflict Ethiopia used "anti-personnel gas."[1] Napalm was also used,[2] as well as other incendiary devices.

At the end of the 1980s, the Soviet Union informed Mengistu that it would not be renewing its defense and cooperation agreement. With the cessation of Soviet support and supplies, the Ethiopian Army's morale plummeted, and the EPLF, along with other Ethiopian rebel forces, began to advance on Ethiopian positions.

Map of Eritrea while still attached to Ethiopia.

While the Communist government had been fighting the war, the people of Ethiopia suffered famine and hardship. In the 1980s as many as a million Ethiopians died of starvation, while the Derg engaged in this and other conflict as well as fighting the Ethiopian Civil War against those who opposed its rule.

After the end of the Cold War, symbolized by the fall of the Berlin Wall, the United States played a facilitative role in the peace talks in Washington during the months leading up to the May 1991 fall of the Mengistu regime. The USA may have resisted involvement earlier in an effort to prevent yet another conflict escalating into a proxy-war between the two sides of the Cold War. In mid-May, Mengistu resigned as head of the Ethiopian government and went into exile in Zimbabwe, leaving a caretaker government in Addis Ababa. Having defeated the Ethiopian forces in Eritrea, EPLF troops took control of their homeland. Later that month, the United States chaired talks in London to formalize the end of the war. These talks were attended by the four major combatant groups, including the EPLF.

A high-level U.S. delegation also was present in Addis Ababa for the July 1-5, 1991 conference that established a transitional government in Ethiopia. The EPLF attended as an observer and held talks with the new transitional government regarding Eritrea's relationship to Ethiopia. The outcome of those talks was an agreement in which the Ethiopians recognized the right of the Eritreans to hold a referendum on independence. The referendum helped in April 1993 when the Eritrean people voted almost unanimously in favor of independence and this was verified by the UN observer mission UNOVER. On May 28, 1993, the United Nations formally admitted Eritrea to its membership. Consisting of various ethnic and linguistic groups, the challenge facing the country is to develop an identity and a sense of nationhood so that stability and self-reliance can be achieved. Having emerged from a long struggle for liberation, most Eritreans now have a strong awareness of belonging to a state that is similar to but distinct from Ethiopia, which they can shape and develop as a free and sovereign state.

Within a few years of Eritrea's independence, relations between Eritrea and Ethiopia, initially cordial, became strained over a border dispute. This resulted in another bloody conflict, the Eritrean-Ethiopian War. The border issue is still contentious, although that war has ended. The issue of access to the sea, one reason why Ethiopia had wanted to retain Eritrea in its territory, also remains contentious and could result in further regional instability. Ethiopians argue that lack of sea access has economical consequences hindering trade and commerce, the exporting and importing of goods. Comparison has been made with similar disputes in other contexts, such as that of Bolivia and Chile.[4]