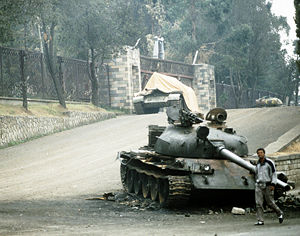 The Ethiopian Civil War (1974-1991)[1] began on September 12, 1974, when the Marxist Derg staged a coup d'état against Emperor Haile Selassie, and lasted until the Ethiopian People's Revolutionary Democratic Front (EPRDF), a coalition of rebel groups, overthrew the government in 1991. The war overlapped other Cold War conflicts in Africa, such as the Angolan Civil War (1975-2002). While the civil war was being fought, so was the war between Ethiopia and Eritrea, a 30-year independence struggle that began in 1961 and ended in 1991. While the Derg discontinued most of Haile Selassie’s policies, they continued to wage the war against the Eritreans with Soviet assistance. With Soviet and Cuban advisors and assistance, the Communist world had a client state which could spread the revolution in Africa. Ethiopia had become a theater of Cold War activity. However, when the Cold War ended, the Soviets quickly withdrew their support in this venture.

In this ancient land, with a proud history, the real challenge now that a cruel and despotic regime has been overthrown is to feed, educate and house the people including those displaced by the Eritrean-Ethiopian War. This may qualify as a war that had to be waged, to overthrow a cruel regime. Tens of thousands of those who opposed the Derg were executed and imprisoned tens of thousands without trial. While it fought this and other wars, upwards of a million people starved to death. Unfortunately, because the Civil War was waged alongside other conflicts, this added to the cost and loss of life. As Africa's senior nation and as the host of the African Union, Ethiopia has much to offer Africa and the world beyond. A healthy, stable and peaceful Ethiopia is good news for the whole Continent.

Despite having enjoyed immense popularity over his long life time, recent events had led to disillusionment with the emperor’s rule. During a famine between 1972 and 1974, he had appeared indifferent and distant and even claimed that officials had kept him uninformed about the extent of the suffering. This made it easier for the Marxists in Ethiopia to spread their Utopian message, in which the peasants, who also felt largely excluded from governance despite the existence of an elected lower house of Parliament (since 1951), would gain in status and grow in prosperity. The revolutionaries abolished the monarchy in March of 1975 and Crown Prince Asfaw Wossen settled permanently in London, United Kingdom where several other members of the Imperial family were already based. The other members of the Imperial family who were still in Ethiopia at the time of the revolution were imprisoned, including Amha Selassie's father the Emperor, his daughter by his first marriage, Princess Ijigayehu, his sister Princess Tenagnework and many of his nephews, nieces, relatives and in-laws. In 1975, first his daughter Princess Ijigayehu, and then his father Emperor Haile Selassie died in detention. Members of the Imperial family would remain imprisoned until 1988 (for the women) and 1989 (for the men).

The Derg eliminated its political opponents between 1975 and 1977 in response to the declaration and instigation of an Ethiopian White terror against the Derg by various opposition groups. Brutal tactics were used by both sides, including executions, assassinations, torture and the imprisonment of tens of thousands without trial, most of whom were innocent. The Ethiopian Red/White terror was the "urban guerrilla" chapter of the brutal war the government fought with guerrillas fighting for Eritrean independence for its entire period in power, as well as with Marxist Tigrean rebels, and with other rebel groups ranging from the conservative and pro-monarchy Ethiopian Democratic Union (EDU) to the far leftist Ethiopian People's Revolutionary Party (EPRP). Most industries and private urban real-estate holdings were nationalized by the Derg in 1975.

At the same time, the Derg faced an invasion from Somalia in 1977, which sought to annex the eastern parts of Ethiopia, which were predominantly inhabited by Somalis. The Ethiopian army was able to defeat the Somali army, supported by the Western Somali Liberation Front, only with massive military assistance from the Soviet Union and Cuba. Ethiopia under the Derg became the Socialist bloc's closest ally in Africa, and became one of the best-armed nations of the region as a result of massive military aid chiefly from the Soviet Union, GDR, Cuba and North Korea. All this time, the Derg was also engaged in the war with Eritrea. Eritrea had become part of Ethiopia in 1951 but as an autonomous region, with its own parliament following the terms of the United Nations settlement. Prior to this arrangement, Eritrea had been administered as a UN mandate by Great Britain after the Allies had liberated both Eritrea and Ethiopia from Italy’s colonial occupation. Ethiopia claimed that Eritrea was part of Ethiopia, although before Italian colonization it had for most of its history existed distinct from Ethiopia, often within a larger polity such as the Ottoman Empire. The war of liberation began when Selassie unilaterally absorbed Eritrea into the rest of Ethiopia, revoking its autonomy.

During the same period, the Derg fulfilled its main slogan of "Land to the Tiller" by redistributing land once belonging to landlords to the peasant tilling the land. Mismanagement, corruption, and general hostility to the Derg's violent rule was coupled with the draining effects of constant warfare with the separatist guerilla movements in Eritrea and Tigray resulting in a drastic fall in general productivity of food and cash crops. Although Ethiopia is prone to chronic droughts, no one was prepared for the scale of drought and famine that struck the country in the mid-1980s, in which up to seven million may have died. Hundreds of thousands fled economic misery, conscription, and political repression, and went to live in neighboring countries and all over the Western world, creating an Ethiopian diaspora for the first time.

The famine in the mid 1980s brought the situation in Ethiopia to the attention of the world, and inspired charitable drives in western nations, notably by Oxfam and the Live Aid concerts of July 1985. Funds raised by Oxfam and Live Aid were distributed among NGOs in Ethiopia. A controversy arose when it transpired that some of these NGOs were under Derg control or influence, and that some Oxfam and Live Aid money had been used to fund the Derg's enforced resettlement programs, under which millions of people were displaced and between 50,000 and 100,000 killed.[2] 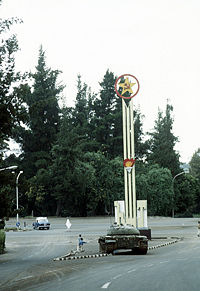 Tanks in the streets of Addis Ababa after rebels seized the capital.

The Derg government officially came to an end in 1987 upon the formation of the People's Democratic Republic of Ethiopia. Mengistu remained in power as President of the new government.

The prevailing political climate of the late 1980s marked a dramatic reduction in aid from Socialist bloc countries. This resulted in even more economic hardship, and more seriously, the collapse of the military in the face of determined onslaughts by the northern guerilla forces.

The Mengistu government was finally toppled by his own officials and a coalition of rebel forces, the Ethiopian People's Revolutionary Democratic Front (EPRDF), in 1991 after their bid for a push on the capital Addis Ababa became successful. Mengistu was granted asylum in Zimbabwe, where he still resides to this day. The EPRDF immediately disbanded the WPE and arrested almost all of the prominent Derg officials shortly after. In December 2006, 72 officials of the Derg were found guilty of genocide. Thirty-four people were in court, 14 others have died during the lengthy process and 25, including Mengistu, were tried in absentia. As the Derg fell, Eritrea finally pushed Ethiopian troops out of their territory and claimed a victory. In 1994, the UN recognized Eritrea as an independent state.

A Marxist-Leninists regime that had enjoyed initial popularity due to dissatisfaction with the monarchy proved to be no better at meeting the needs of the people than the previous administration. During the war, Ethiopia was drawn into the Cold War with Soviet and Cuban advisors and aid yet while war was waged on several fronts, the people often starved. The challenge now, in this ancient land with a proud history is to feed, educate and house the people including those displaced by the Eritrean-Ethiopian War. This may have been a war that had to be waged, to overthrow a dictatorial regime. Unfortunately, it was waged alongside other conflict adding to the cost and loss of life. As Africa's senior nation, Ethiopia has much to offer and a healthy, stable and peaceful Ethiopia is good news for the whole Continent.