For other uses, see Napalm (disambiguation). 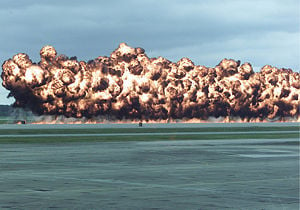 A simulated Napalm explosion during MCAS Air Show in 2003. The bomb would contain a mix of napalm-B - f and gasoline.

Napalm is the thickener used for jelling gasoline or other flammable liquids used in warfare. The product is a sticky, incendiary gel. It was developed during World War II by a team of Harvard chemists led by Louis Fieser. Its name combines the names of the original ingredients: the coprecipitated aluminum salts of naphthenic and palmitic acids. Addition of these substances to the flammable liquid causes it to gel.[1]

Napalm was used in flamethrowers and bombs by the U.S. and Allied forces to increase the effectiveness of flammable liquids. The substance is formulated to burn at a specific rate and adhere to materials. Another effect, mainly involving its use in bombs, is that napalm rapidly deoxygenates the air and creates large amounts of carbon monoxide, leading to suffocation. Napalm bombs were also used in the Vietnam War to burn off the forest in order to clear landing zones for helicopters.[2]

Historical use of liquid incendiaries

Although napalm is a twentieth-century invention, it is part of a long history of incendiary materials in warfare. Historically, these materials were primarily liquids. An infantry-based flammable liquid fuel weapon, the flamethrower, was introduced in World War I by the German military; variations of which were soon developed by their opponents in the conflict.[3]

One of the major problems of early incendiary fluids (such as those used in flamethrowers) was that they splashed and drained too easily. The U.S. found that the range and effectiveness of flamethrowers could be increased by mixing gasoline with natural rubber, but the drawback here was that natural rubber was in high demand and expensive. Napalm provided a far cheaper alternative, solving the issues involved with rubber-based incendiaries. [4] Modern napalm, known as napalm-B, is made by mixing benzene with polystyrene. [5] 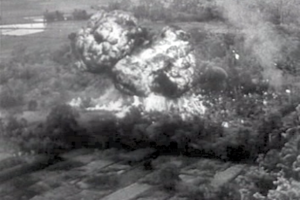 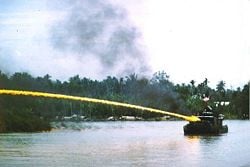 Riverboat of the U.S. Brownwater Navy deploying an ignited napalm mixture from a riverboat-mounted flamethrower in Vietnam

On July 17, 1944, napalm incendiary bombs were dropped for the first time by American P-38 pilots on a fuel depot at Coutances, near St. Lô, France. Napalm bombs were first used in the Pacific Theatre during the Battle of Tinian by Marine aviators; however, its use was complicated by problems with mixing, fusing and the release mechanisms.[6] In World War II, Allied Forces bombed cities in Japan with napalm, and used it in bombs and flamethrowers in Germany and the Japanese-held islands. It was used by the Greek army against communist guerrilla fighters during the Greek Civil War, by United Nations forces in Korea, by France against the Viet Minh in the First Indochina War, by Mexico in the late 1960s against guerrilla fighters in Guerrero and by the United States during the Vietnam War.

The most well-known method of delivering napalm is from air-dropped incendiary bombs. A lesser-known method is the flame throwers used by combat infantry. Flame throwers use a thinner version of the same jellied gasoline to destroy gun emplacements, bunkers and cave hideouts. U.S. Marines fighting on Guadalcanal found them very effective against Japanese positions. The Marines used fire as both a casualty weapon as well as a psychological weapon. They found that Japanese soldiers would abandon positions in which they fought to the death against other weapons. Prisoners of war confirmed that they feared napalm more than any other weapon utilised against them.

Napalm became one of the most preferred weapons of the Korean War. Pilots returning from the war zone often remarked they would rather have a couple of droppable gasoline tanks full of napalm than any other weapon, bombs, rockets or guns. The U.S. Air Force and Navy used napalm with great effect against all manner of targets to include troops, tanks, buildings and even railroad tunnels. The demoralizing effect napalm had on the enemy became apparent when scores of North Korean troops began to surrender to aircraft flying overhead. Pilots noted that they saw surviving enemy troops waving white flags on subsequent passes after dropping napalm. The pilots radioed to ground troops and the North Koreans were captured. [7]

In a few cases, napalm has incapacitated and killed its victims very quickly. Those who do survive suffer third degree burns, damaging the vascular dermis, and are generally in terrible pain and have huge scars over their bodies. Victims who suffer second degree burns from splashed napalm will be in significant amounts of pain, as it doesn't sear the flesh enough to destroy the nerves.[8]

"Napalm is the most terrible pain you can imagine," said Kim Phuc, a napalm bombing survivor known from a famous Vietnam War photograph. "Water boils at 100 degrees Celsius. Napalm generates temperatures of 800 to 1,200 degrees Celsius."[9]

Phuc sustained third-degree burns to half her body and was not expected to live. But thanks to assistance from South Vietnamese photographer Nick Ut, and after surviving a 14-month hospital stay and 17 operations, she became an outspoken peace activist.

International law does not necessarily prohibit the use of napalm or other incendiaries against military targets,[10] but use against civilian populations was banned by the United Nations' inhumane weapons convention (often referred to as the CCW) in 1981. Protocol III of the CCW restricts the use of incendiary weapons (not only napalm), but a number of states have not acceded to all of the protocols of the CCW. According to the Stockholm International Peace Research Institute (SIPRI), states are considered a party to the convention, which entered into force as international law in December 1983, if they ratify at least two of the five protocols. The United States, for example, is a party to the CCW but did not sign protocol III.[11] 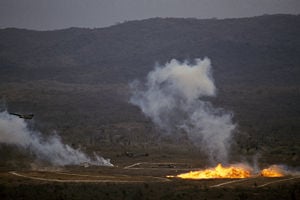 An Ecuadorian air force IAI Kfir aircraft drops napalm on a target range during the joint US and Ecuadorian Exercise BLUE HORIZON.

Reports by the Sydney Morning Herald suggested the usage of napalm in the Iraq War by US forces.[12] This was denied by the U.S. Department of Defense. In August 2003, the San Diego Union Tribune alleged that U.S. Marine pilots and their commanders confirmed the use of Mark 77 firebombs on Iraqi Republican Guards during the initial stages of combat. Official denials of the use of 'napalm' were, however, disingenuous, as the Mk 77 bomb that is currently in service at this time, the Mk 77 Mod 5, does not use actual napalm (e.g. napalm-B). The last U.S. bomb to use actual napalm was the Mark 77 Mod 4, the last of which were destroyed in March 2001.[13] The substance used now is a different incendiary mixture, but sufficiently analogous in its effects that it is still a controversial incendiary, and can still be referred to colloquially as 'napalm.'

"We napalmed both those (bridge) approaches," said Col. Randolph Alles in a recent interview. "Unfortunately, there were people there because you could see them in the (cockpit) video." (…) "They were Iraqi soldiers there. It's no great way to die," he added. (…) The generals love napalm. … It has a big psychological effect." - San Diego Union-Tribune, August 2003[14]

These bombs did not actually contain napalm. The napalm-B (super napalm) used in Vietnam was gasoline based. The Mk-77 firebombs used in the Gulf were kerosene based. It is, however, a napalm-like liquid in its effect.[1] 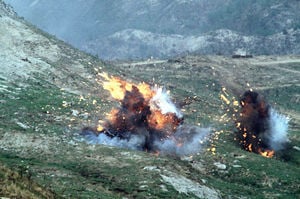 Napalm bombs explode after being dropped from a Republic of Korea Air Force F-4E Phantom II aircraft during a live-fire exercise.

Napalm is usually a mixture of gasoline with suitable thickening agents. The earliest thickeners were soaps, aluminum, and magnesium palmitates and stearates. Depending on the amount of added thickener, the resulting viscosity may range between syrupy liquid and thick rubbery gel. The content of long hydrocarbon chains makes the material highly hydrophobic (resistant to wetting with water), making it more difficult to extinguish. Thickened fuel also rebounds better from surfaces, making it more useful for operations in urban terrain.

A later variant, napalm-B, also called "super napalm," is a mixture of low-octane gasoline with benzene and polystyrene. It was used in the Vietnam War. Unlike conventional napalm, which burns for only 15–30 seconds, napalm B burns for up to ten minutes with fewer fireballs, sticks better to surfaces, and offers improved destruction effects. It is not as easy to ignite, which reduces the number of accidents caused by soldiers smoking. When it burns, it develops a characteristic smell.

Starting in the early 1990s, various websites including The Anarchist Cookbook advertised recipes for homemade napalm. These recipes were predominantly equal parts gasoline and styrofoam. This mixture closely resembles that of napalm-B, but lacks a percentage of benzene.

In the early 1950s, Norway developed its own napalm, based on fatty acids in whale oil. The reason for this development was that the American-produced thickening agent performed rather poorly in the cold Norwegian climate. The product was known as Northick II.

Retrieved from https://www.newworldencyclopedia.org/p/index.php?title=Napalm&oldid=985880
Categories:
Hidden category:
This page was last edited on 20 December 2014, at 16:09.
Content is available under Creative Commons Attribution/Share-Alike License; additional terms may apply. See Terms of Use for details.