Coati is the common name for any of the species of New World mammals comprising the genus Nasua of the Carnivora family Procyonidae, a family that also includes raccoons, kinkajous, olingos, ringtails, and cacomistles. The designation coati sometimes is expanded to include the mountain coati as well, although this is a separate genus, Nasuella.

From two to five extant (living) species of coati are recognized, depending on the taxonomic scheme and whether the mountain coati (Nasuella olivacea) is included. The two species always recognized in Nasua are the South American coati (or ring-tailed coatimundi), Nasua nasua, and the white-nosed coati, Nasua narica. The island coati (or Cozumel Island coati) is sometimes recognized as a separate species, Nasua nelsoni, and sometimes is considered a subspecies of the white-nosed coati, N. narica nelsoni. Some recognize a Wedel's coati as a separate species, Nasua wedeli. This article will limit the definition of coati to members of the Nasua genus.

Coatis play an important role in food chains, consuming a diversity of insects and other invertebrates, as well as plant matter (fruits, nuts, roots, leaves) and small vertebrates, and being consumed by various cats (jaguar, ocelots, jaguarundis) foxes, tayras (tolomucos), boas, birds of prey, and humans. They help in the control of insects and maintaining the balance of prey populations. They also add to the human enjoyment of nature, and some are even raised as pets or fed by homeowners in the wild.

Coati's are placed with raccoons in both the family Procyonidae and the subfamily Procyoninae (which also includes the cacomistles). Distinctive features of all species of coati include a long, bushy, banded tail, which is often held erect. The bands may be quite light. The coati is distinguished from a raccoon by having a longer, pointed muzzle and a longer tail. Genetic studies have suggested that the closest relatives of the coatis are the olingos (Koepfli et al. 2007). Unlike most members of the raccoon family, coatis are primarily diurnal, being active during the day and sleeping at night.

Coatis range in size from 13 to 50 inches (33 to 130 centimeters) including their tails, which can be just as long as their bodies. They weigh from 7 to 15 pounds. Males are larger than females.

Coati's are neotropical mammals, ranging from southern Arizona in the United States to north of Argentina. Some are found up to 3500 meters in elevation. The island coati, Nasua nelsoni, is limited to the island of Cozumel. In the wild, coatis live primarily in forest areas, including tropical rainforests, dry scrub forest, riverine forests, and so forth (UMMZ 2007), but also live in grasslands as well.

Coatis prefer to sleep or rest in elevated places and niches, like the rainforest canopy, in crudely-built sleeping nests. They are excellent tree climbers. In fact, they can reverse their ankles—turn them around—so that they can climb down trees headfirst. Coatis walk on the soles of their feet, like the Grizzly Bear (Ursus arctos horribilis).

The females live in groups of 4 to 24 individuals called bands. Males join bands only during the mating season. Coati have been known to live for 14 years in captivity.

Coatis spend most of the day foraging for food. They are largely insectivorous but also eat plant material, such as fruits and nuts, and their diet may include small prey like lizards, rodents, snails, and small birds. They often eat while hanging upside down from a tree branch. A coati finds food using its keen sense of smell. 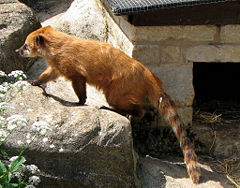 The coatimundi, Nasua nasua, is found in tropical areas of South America, ranging from Uruguay and the northern parts of Argentina in the south of the continent to Columbia and Venezuela and into Ecuador in the north; they found up to 2,500 meters on the eastern and western slopes of the Andes (UMMZ 2007). It is also called the ring-tailed coati and the ring-tailed coatimundi. Some recognize up to 11 subspecies (DWCT 2007).

Coatimundis have a reddish, brown or dark coat, depending on the species, with a lighter under-part and a white-ringed tail in most cases. All coatis share a slender head with an elongated, slightly upward-turned nose, small ears, dark feet and a long, non-prehensile tail used for balance and signaling.

Coatimundi have strong limbs to climb and dig, and have a reputation for intelligence, like their fellow procyonid the raccoon. 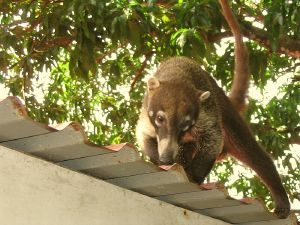 This coati in Nosara, Costa Rica displays the curious nature common to the species.

In the wild, coatis live for about 7 to 8 years, while in captivity they can live for up to 15 years.

The coatimundi is an omnivore; its diet consists of fruits, nuts, leaves, roots, insects, amphibians, fish, reptiles, eggs, small birds or mammals, and even carrion, which it finds or catches on the ground or on trees. The snout, with a formidable sense of smell, assists the skilled paws in a hog-like manner to unearth insects and roots.

Coatimundi females and young males up to two years of age are gregarious and travel through their territories in noisy, loosely-organized bands made up of 4 to 25 individuals, foraging with their offspring on the ground or in the forest's canopy. Males over two years become solitary due to behavioral disposition and collective aggression from the females, and will join the female groups only during the breeding season.

When provoked, or for defense, coatis can be fierce fighters: their strong jaws, sharp canine teeth, and fast scratching paws, along with a tough hide sturdily attached to the underlying muscles, make it very difficult for predators (e.g. dogs, jaguars) to seize the small mammal.

The white-nosed coati (Nasua narica), also known as pizote, harrington, and antoon, inhabits wooded areas (dry forests, rain forests, cloud forests) of the Americas. They are found at any altitude from sea level to 3,500 meters (11,500 feet), and from as far north as southeastern Arizona and New Mexico to as far south as Panama. In Mexico, it is often referred to as "tejon," which actually means badger. Since there are true badgers in Mexico, this name is not very accurate and "coati" should be used to avoid confusion between the two animals. There are three or four recognized sub-species, depending on whether the island coati is considered a subspecies or species (DWCT 2007).

A white-nosed coati has a long shovel-shaped snout that extends beyond its lower jaw, and a 20-to-25-inch-long erect tail with six or seven light bands on it. It has crushing molars and large canine teeth. They are generally dark brown, reddish, or yellow. Their eyes are masked while their muzzles, chins, and throats are light gray. Their bodies range around 110 to 120 centimeters (43 to 47 inches) long, of which 50 to 65 centimeters (20-26 inches) is tail. They normally weigh between five and nine kilograms (11-20 pounds).

They are omnivores, preferring small vertebrates, fruits, carrion, insects, and eggs. They can climb trees easily, where the tail is used for balance, but they are most often on the ground foraging. They readily adapt to human presence; like raccoons, they will raid campsites and trash receptacles. They can be domesticated easily, and have been verified experimentally to be quite intelligent.

White-nosed coatis are primarily diurnal, retiring during the night to a specific tree and descending at dawn to begin their daily search for food. However, their habits are adjustable, and in areas where they are hunted by humans for food, or where they raid human settlements for their own food, they become more nocturnal. Adult males are solitary, but females and sexually immature males form social groups. They use many vocal signals to communicate with one another, and also spend time grooming themselves and each other with their teeth and claws.

The Cozumel Island coati (Nasua nelsoni) is a coati from the island of Cozumel, which is located in the Caribbean Sea off the eastern coast of Mexico's Yucatán Peninsula, opposite Playa del Carmen. The island is about 48 kilometers (30 miles) long in the north-south direction and 16 kilometers (10 miles) wide east-west, and is the largest Atlantic island of Mexico. It is about 20 km (12 miles) from the mainland.

Although very similar to the white-nosed coati, Nasua narica, it has shorter, softer fur and is much smaller. Some scientists consider Nasua nelsoni to be a sub-species of Nasua narica, named N. narica nelsoni.

Retrieved from https://www.newworldencyclopedia.org/p/index.php?title=Coati&oldid=678857
Categories:
This page was last edited on 2 April 2008, at 04:52.
Content is available under Creative Commons Attribution/Share-Alike License; additional terms may apply. See Terms of Use for details.