Ocelot (Leopardus pardalis, formerly Felis pardalis) is a nocturnal, New World wild cat (family Felidae), up to about three or four feet (.9 to 1.2 meters) in length, including the tail, and characterized by a grayish to orange yellow fur with black markings and ringed tail. Also known as the painted leopard, McKenney's wildcat, or manigordo, the ocelot is distributed over South and Central America and Mexico, but has been reported as far north as Texas and in Trinidad, in the Caribbean.

Leopardus pardalis exhibits a bi-level functionality, playing a valuable ecological role, while also advancing its own survival, reproduction, and maintenance. Ocelots are an integral component of ecosystems, limiting the population size of rodents, rabbits, monkeys, and other prey. Additionally, they have been a source of wonder for people, both today, such as in zoos, and historically, such as for the Moche people of ancient Peru, who worshiped animals and often depicted ocelots in their art (Berrin and Larco 1997).

Ocelots also have been valued for their fur. However, exploitation for the fur trade, including trapping of up to 200,000 a year from the early 1960s to mid-1970, severely reduced populations in some parts of their range (Grzimek et al. 2004) The feline was classified a "vulnerable" endangered species from the 1980s until 1996, but is now generally considered "least concern" by the 2006 IUCN Red List.

The ocelot is part of the Felidae family, which belongs to the Carnivora order within the mammals (Class Mammalia). Members of the family are called cats and sometimes felines. Cats are more strictly carnivorous (meat eating) than most other members of Carnivora (carnivores). The teeth of cats are well suited to their diet, with long canines for gripping prey and blade-like molars for cutting flesh (Voelker 1986).

All cats walk on four feet, in a digitigrade manner—that is on their toes. Their hind legs are longer and stronger than their fore legs, which gives them strength for sprinting and leaping, but not stamina for long distance running. Cats have claws on their feet that are used for gripping prey, for fighting, and for climbing. In the ocelot, as with most cats, the claws can be retracted into the toes, which helps keep them sharp. The bodies of all cats (except some breeds of domestic cat) are covered with thick fur. In most species, this is spotted or striped.

Felidae usually is divided into two subfamilies, Pantherinae (which includes "big cats" like lions, jaguars, tigers, and leopards) and Felinae (which includes the "small cats," although some can be large, like the cougar). The ocelot, placed in species Leopardus pardalis, is part of the Felinae subfamily. The ocelot was formerly listed as Felis pardalis and was first described by Linnaeus in 1758.

Forest dwelling ocelots tend to have a more yellow or orange-yellow coat, while those living in arid scrub tend to be grayer (Grzimek et al. 2004). There are black markings (spots, rosettes, rings, and stripes) on the head, neck, body, and tail, with black bands (ringed bars) on the tail, oval spots arranged in bands on the body, spots on the head, and stripes (black lines) on both cheeks. On the back of each ear, ocelots have a single white spot, and some white markings around the eyes and mouth (Langenburg and Mulheisen 2003). The underbelly is white or lighter. The ocelot's appearance is similar to that of the domestic cat. Its fur resembles that of a clouded leopard or jaguar.

The ocelot has a geographic range from northern Argentina to southwestern Texas (Langenburg and Mulheisen 2003; Grzimek et al. 2004).

The ocelot once inhabited the chaparral thickets of the Gulf coast in south and eastern Texas, and was found in Arizona. In the United States, it now ranges only in several small areas of dense thicket in south Texas. The ocelot's continued presence in the United States is questionable, due largely to the introduction of dogs, the loss of habitat, and the introduction of highways. Young male Ocelots while searching for territory are frequently killed by cars.

The feline was classified a "vulnerable" endangered species from the 1980s until 1996, but is now generally considered "least concern" by the IUCN Red List. The Texas ocelot subspecies, Leopardus pardalis albescens, is still classified as endangered as of the IUCN's 2006 red list. 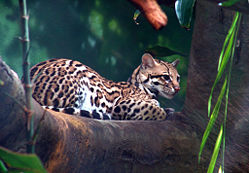 The ocelot of Woodland Park Zoo in Seattle, Washington.

The ocelot is mostly nocturnal and very territorial. It will fight fiercely, sometimes to the death, in territorial disputes. Like most felines, it is solitary, usually meeting only to mate. However, during the day it rests in trees or other dense foliage, and will occasionally share its spot with another ocelot of the same sex. Home ranges vary from about 2 to 31 square kilometers (0.8 to 12 square miles) (Grzimek et al. 2004).

The ocelot is well equipped for an arboreal lifestyle, being an excellent climber, and it will sometimes take to the trees; however, it is mostly terrestrial. It is an excellent swimmer (Grzimek et al. 2004).

Prey includes almost any small animal: monkeys, snakes, rodents, rabbits, lesser anteaters, turtles, iguanas, fish, amphibians, and birds are common prey, as are freshwater crustaceans and small domestic animals such as baby pigs and poultry. Almost all of the prey that the ocelot hunts is far smaller than itself. Studies suggest that it follows and finds terrestrial prey via odor trails, but the ocelot also has very keen vision, including night vision.

The following are the currently recognized subspecies:[1]