Iguana is both the common name for several of the larger members of tropical lizards in the family Iguanidae, and the scientific name of the genus within Iguanidae comprised of two extant members, the green iguana (I. iguana) and the lesser Antillean iguana (I. delicatissima). In the broader sense, iguanas are scattered over several genera and include the desert iguana (Dipsosaurus dorsalis), the marine iguana (Amblyrhynchus cristatus), Galápagos land iguanas (genus Conolophus), and spiny-tailed iguanas (genus Ctenosaura). The iguana family, Iguanidae, also includes smaller species whose members are not called iguanas.

Iguanas provide values for the ecosystem and for humans. Ecologically, they are important to food chains, consuming largely plant matter and being eaten by various predators. For humans, they add to the wonder of nature and the green iguana has been a popular food source in Central and South America for the past 7000 years, as well as a popular pet.

The word "Iguana" is derived from a Spanish form of the original Taino name for the species, "Iwana" (Coles 2002).

Iguanidae is a family of lizards composed of iguanas and related species, including the green iguana commonly kept as a pet. The term "lizard" refers to any of the numerous reptiles of the suborder Sauria (or Lacertilia) of the order Squamata. As lizards, iguanas are characterized by having less flexible jaws than snakes, movable eyelids, external ear openings, and have four-well developed limbs, as well as an integumentary system comprised of scales, with a skull composed of quadrate bones. 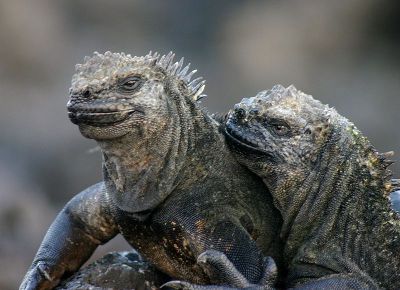 In addition to iguanas, which in a general sense refer to the larger members of Iguanidae, the family includes the chuckwalla (Sauromalus obesus), the side-blotched lizards (genus Uta), and the anole (subfamily Polychrotinae, although sometimes placed in its own family Plychrotidae), among others.

The traditional classification is as follows:
Family Iguanidae 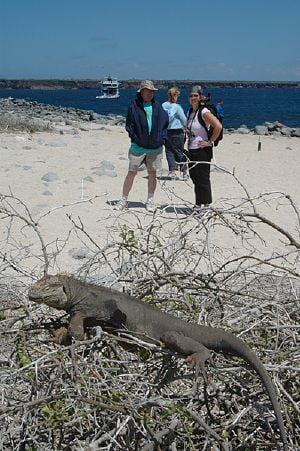 Frost et al. (1989) redefined this family. The genera belonging to the various subfamilies were assigned to separate families. This view is not generally accepted and the "traditional" classification is still widely used. The Frost et al. (1989) system is as follows: 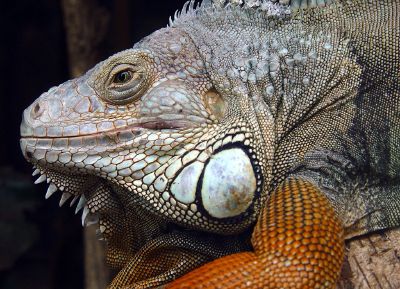 The green iguana (Iguana iguana) is a large, arboreal herbivorous species of lizard of the genus iguana, native to Central and South America. The green iguana ranges over a large geographic area, from southern Brazil and Paraguay to as far north as Mexico and the Caribbean Islands. In the United States, it exists as feral populations in Florida, Hawaii and the Rio Grande Valley of Texas. The green iguana is commonly found in captivity. 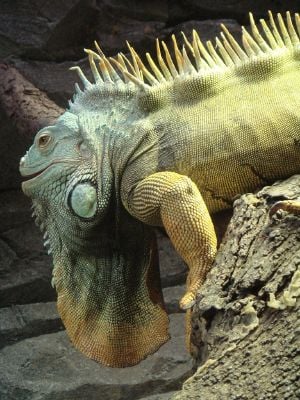 A male Green iguana with spines and dewlap.

Green iguanas possess a row of spines along their backs and along their tails that helps to protect them from predators (Samuelson 1995). Their whip-like tails can be used to deliver painful strikes and, like many other lizards, the tail can break off when grabbed, allowing the iguana to escape. In addition, iguanas have well developed dewlaps, which help regulate their body temperature (Bebler and King 1979). It is also used in courtships and displays (de Vosjoli and Blair 1992; Samuelson 1995; Conant and Collins 1991).

Green iguanas are diurnal and arboreal and often found near water (Cogger and Zweifel 1992; Samuelson 1995). During cold, wet weather, green iguanas prefer to stay on the ground for greater warmth (Swanson 1950). They can also swim. When swimming, an iguana remains submerged and lets its four legs hang limply against its side and propels itself through the water with powerful tail strokes (Swanson 1950).

Because of the green iguana's popularity in the pet trade and as a food source in Latin America, they are listed on the CITES Appendix II, which means that while they are not an endangered species, "their trade must be controlled so as to not harm the species in the future" (CITES 2007). 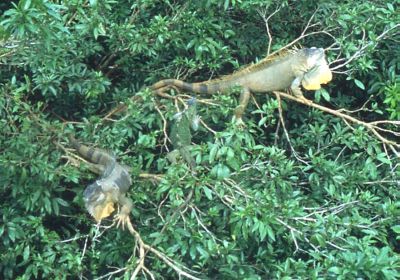 a young iguana with two adults in the trees

Green iguanas have evolved a white photosensory organ on the top of their heads called the parietal eye, which are also called a third eye, pineal eye, or pineal gland (Brames 2007). This “eye” does not work the same way as a normal eye does, as it has only a rudimentary retina and lens and thus cannot form images (Brames 2007). It is, however, sensitive to changes in light and dark and can detect movement, helping the iguana when being stalked by predators from above (Brames 2007).

Green iguanas from Guatemala and southern Mexico have small horns on their snouts between their eyes and their nostrils, whereas others do not (Samuelson 1995). Naturalists once classified these iguanas as belonging to different subspecies (Iguana iguana rhinolopha); however, this classification has been found to be invalid as iguanas with similar nose projections appear randomly in other populations and interbreed freely with those that do not share this trait (Samuelson 1995). The Moche people of ancient Peru worshiped animals and often depicted Green iguanas in their art (Berrin and Larco Museum 1997). The iguana has also been used as a food source in Central and South America for the past 7000 years. In Central and South America, green iguanas are used as a source of meat and are often referred to as gallina de palo, "bamboo chicken" or "chicken of the tree" (Swanson 1950). The Lesser Antillean iguana varies in color between different island populations, but the base color tends to be gray, with green splotching on the underside (Lazell 1973). They have large, pale, ivory colored scales on their heads. The jowls of males are pink and the scales around the eyes are blue (Lazell 1973). Males are larger than females and are 40 centimeters (16 inches) long, with an 80-centimeter (32-inch) tail when full-grown. Females are two-thirds this size.

Like the green iguana, Lesser Antillean iguanas are primarily herbivores.

The Lesser Antillean iguana is a vulnerable species and is found on the IUCN Red List (van den Burg et al. 2018). While it is legally protected from hunting throughout its range, enforcement of these regulations is extremely difficult and therefore limited. Other threats include habitat loss to agriculture and development and the introduction of feral predators such as dogs and cats.

Retrieved from https://www.newworldencyclopedia.org/p/index.php?title=Iguana&oldid=1058486
Categories:
Hidden category:
This page was last edited on 4 October 2021, at 23:45.
Content is available under Creative Commons Attribution/Share-Alike License; additional terms may apply. See Terms of Use for details.