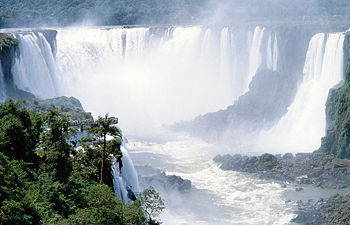 On the left side, Brazil; on the right side, Argentina and, in the center, the Throat of the Devil.

Iguazu Falls, Iguassu Falls, or Iguaçu Falls (Portuguese: Cataratas do Iguaçu, Spanish: Cataratas del Iguazú) is a majestic area of cataracts on the Iguazu River, 23 kilometers (14 miles) above the confluence with the Alto (Upper) Paraná River, at the Argentinan and Brazilian border. The Falls divide the river into the upper and lower Iguazu. Their name comes from the Guarani or Tupi words meaning "great water."[1]

The area consists of a network of 275 waterfalls spanning an area of three kilometers (1.8 miles). Iguaçu National Park of Brazil was declared a UNESCO World Heritage Site in 1986. Together with Iguazú National Park in Argentina, a UNESCO Site since 1984, the two share the waterfalls. The total area of both national parks combines 250,000 hectares (965.25 sq mi, or 2,500 sq km) of subtropical and declared forest. The lush vegetation of these national parks is continuously sprayed by the abundant clouds of mist from the falls. The area is home to many rare and endangered species of plants and animals, including the giant otter and the giant anteater.

In addition, the waterfalls' great power feeds the Itaipu hydroelectric power plant built jointly by Paraguay and Brazil, completed in 1991. Touted as a masterpiece of technology, it is one of the largest in the world, providing nearly forty percent of Brazil's and Argentina's energy needs.

Legend of the Cataracts 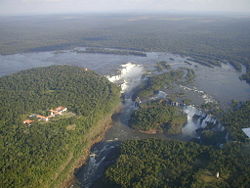 Aerial view, from the Argentinian side 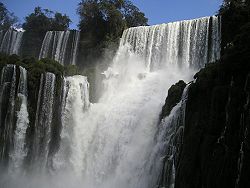 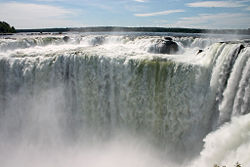 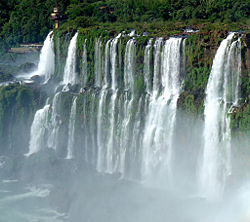 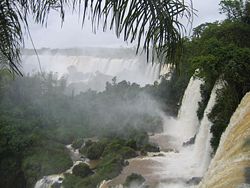 Aerial view of a section of the waterfalls

Natives of the area have a legend of the creation of Iguazu Falls. It is said that a beautiful maiden named Naipí lived in a village near the river. Her great beauty caused even the gods to fall in love with her. A god disguised as a mere boy approached her parents and requested her hand in marriage. Finding him suitable, the parents immediately agreed. To the god's misfortune, Naipí had a mortal lover, Tarobá, with whom she fled in a canoe through the Iguazu River. In rage, the god sliced the river forming the abysses of the cataracts and creating the waterfalls, condemning the lovers to eternal misery.

Some say that Naipí was turned into a rock next to the great waterfall, while her lover, Tarobá, was turned into a palm tree on the waters' banks, ever to gaze at his lover without being able to touch her. Others end the tale saying the couple fell into the gorge and perished. The mighty Iguazu Falls rage as the continuous heartache of the rejected god.

The area surrounding Iguazu Falls was inhabited 10,000 years ago by the hunter-gatherers of the Eldoradense culture. They were displaced around 1,000 C.E. by the Guaraní, who brought new agricultural technologies, and were displaced in turn by the Spanish and Portuguese conquistadores in the sixteenth century.

The first European to find the Falls was the Spanish Conquistador Álvar Núñez Cabeza de Vaca in 1541, after whom one of the falls on the Argentine side is named.[1] Jesuit missions followed in 1609.

The great power of the Falls was not utilized until the construction of the huge Itaipu hydroelectric power plant built jointly by Paraguay and Brazil, which was completed in 1991. The dam, touted as a masterpiece of technology, is one of the largest in the world, providing nearly forty percent of the power to Brazil and Argentina.[1]

The Devil's Throat (Garganta del Diablo in Spanish and Garganta do Diabo in Portuguese), a U-shaped 150-meter-wide and 700-meter-long (490 by 2,300 feet) cliff, is the most impressive of all, and marks the border between Argentina and Brazil. Possibly half of the river is directed to Devil's Throat. Two thirds of the Falls are within Argentine territory, while primary access to the falls is from Brazil.[3] Mist rises between 100 and 500 feet (30 and 150 m) above Devil's Throat.

About 900 meters (2,953 ft) of the three-kilometer length does not have water flowing over it. The edge of the basalt cap recedes only three mm per year. The water of the lower Iguazu collects in a canyon that drains into the Paraná River in Argentina.

Vastly larger than North America's Niagara Falls, Iguazu is rivaled only by Africa's Victoria Falls which separates Zambia and Zimbabwe (this is excluding extremely large rapid-like falls such as the Boyoma Falls). While Iguazu is wider because it is split into about 275 discrete falls and large islands, Victoria is the largest curtain of water in the world, at over a 1600 m wide and over 100 m (350 ft) in height (in low flow Victoria is split into five by islands; in high flow it can be uninterrupted).

The Falls are shared by the Iguazú National Park in Argentina and Iguaçu National Park in Brazil. These parks were designated UNESCO World Heritage Sites in 1984 and 1986, respectively.[4] Designation qualifications are listed by UNESCO as "exceptional natural beauty" and "habitat of rare and endangered species."[5]

The animals of the parks includes several endangered species: jaguar, jaguarundi, tapir, ocelot, tirica, anteater, pavas de monte, the jungle eagle, and the Yacare Caiman. One can also find birds like the vencejo de cascada and large toucans; mammals like the coatí, and a diversity of butterflies. The vinaceous-breasted parrot, named for its wine-colored plumage, also makes this area its home.

The Iguazú River joins the Paraná River 23 kilometers (14.5 miles) beyond the falls, after an 1,320 km (820) course. Inside the park it becomes up to 1,500 m (4,922 feet) wide and turns first south, then north, forming a large U-shape. Its banks are densely populated by trees, including the ceibo (Cockspur coral tree), whose flower is Argentina's national flower.

The plants within the area include lapacho negro and lapacho amarillo (family Bignoniaceae), as well as palmito trees and the 40-meter-high palo rosa (family Apocynaceae).

The Falls can be reached from the two main towns on either side of the Falls: Foz do Iguaçu in the Brazilian state of Paraná, and Puerto Iguazú in the Argentine province of Misiones as well as from Ciudad del Este (Paraguay) on the other side of the Parana river from Foz do Iguaçu.

Panorama of the Falls from Brazil

Retrieved from https://www.newworldencyclopedia.org/p/index.php?title=Iguazu_Falls&oldid=1099259
Categories:
This page was last edited on 4 February 2023, at 13:42.
Content is available under Creative Commons Attribution/Share-Alike License; additional terms may apply. See Terms of Use for details.