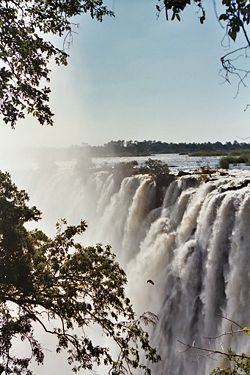 Victoria Falls, seen from the Zambian side.

The Victoria Falls, one of the world's "natural wonders," are situated on the Zambezi River, on the border between Zambia and Zimbabwe. Vastly larger than North America's Niagara Falls, the Victoria Falls are rivaled only by South America's Iguazu Falls in volume. While Iguazu is divided into over 270 relatively "small" falls and cataracts, Victoria Falls is 1.06 miles wide, making it the largest curtain of water in the world. It drops between 295 feet and 355 feet into the Zambezi Gorge and an average of 1.804 million cubic feet of water plummeting over the edge every minute.

First seen by a European, Scottish missionary-explorer David Livingstone, in 1885, they are also a UNESCO World Heritage Site. The falls are considered a remarkable spectacle because of the peculiar, narrow, slot-like chasm into which the water falls, so one can view the falls face-on. The falls are part of two national parks, Mosi-oa-Tunya National Park in Zambia and Victoria Falls National Park in Zimbabwe. The Falls are one of Southern Africa's major tourist attractions. 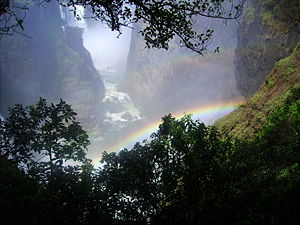 "No one can imagine the beauty of the view from anything witnessed in England."—Explorer David Livingstone.

The earliest known inhabitants of the area around Victoria Falls were Khoisan hunter-gatherers (bushmen). They were followed by Tokaleya people, who called the falls Shongwe. Later, the Ndebele named them aManza Thunqayo, and the Makololo called them Mosi-oa-Tunya, meaning "The smoke that thunders."

The first European to see the falls was David Livingstone on November 17, 1855, during his 1852-1856 journey from the upper Zambezi to the mouth of the river. Livingstone reached the Falls from upriver and rowed across to a small island that now bears the name Livingstone Island. Livingstone had previously been impressed by the Ngonye Falls further upstream, but found the new falls much more impressive, and named them after Queen Victoria. He wrote of the falls "No one can imagine the beauty of the view from anything witnessed in England. It had never been seen before by European eyes; but scenes so lovely must have been gazed upon by angels in their flight."[1]

In 1860, Livingstone returned to the area and made a detailed study of the falls with the explorer John Kirk. Other early European visitors included Portuguese explorer Serpa Pinto; Czech explorer Emil Holub, who made the first detailed plan of the falls and its surroundings in 1875 (published in 1880); and British artist Thomas Baines, who executed some of the earliest paintings of the falls. Until the area was opened up by the building of the railway in 1905, however, the falls were seldom visited by other Europeans. 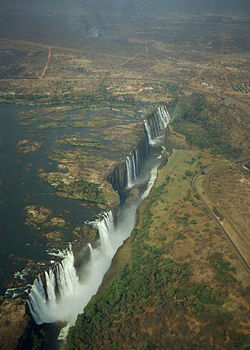 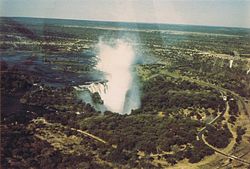 "The Smoke that Thunders."

The falls lie about midway down the course of the Zambezi. For a considerable distance above the falls, the Zambezi flows over a level sheet of basalt, in a valley bounded by low and distant sandstone hills. The river's course is dotted with numerous, tree-clad islands, which increase in number as the river approaches the falls.

The falls are formed as the Zambezi plummets into a narrow chasm about 400 feet wide, carved by its waters along a fracture zone in the earth's crust. Numerous islets at the crest of the falls divide the water to form a series of falls.

The falls are extremely broad at about 1.06 miles across, and the height of the cascade varies from 263 feet at the right bank to 354 feet in the center. This makes Victoria roughly twice the height of Niagara Falls, and well over twice the width of the horseshoe falls (Niagara's main portion). The falling water generates spray and mist that rises typically to a height of over 1312 feet (and sometimes even twice as high), and is visible from up to over 30 miles away. At full moon, a "moonbow" can be seen in the spray instead of the daylight rainbow.

During the wet season, the falls have over 19-million cubic feet of water falling over its crestline each minute, and spray from this rises several hundreds of feet into the air because of the incredible force of the falling water. The 1958 flood of the Zambezi saw the falls reach record volumes of over 27-million cubic feet per minute. This compares to the Niagara Falls which has about six million cubic feet of water passing its crestline per minute in peak flow. This compares also to the Iguazu Falls of South America in terms of of size with peak volume.

The fall is broken into four parts by islands on the lip of the precipice. Close to the right bank is a sloping cataract 35 miles wide called the Leaping Water. Then beyond the 984-foot-wide Boaruka Island is the main fall, about 1509 feet across. Livingstone Island divides the main fall from another broad channel about 1739 feet wide, while on the left bank of the river is the Eastern Cataract. 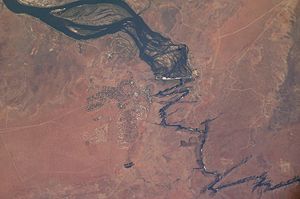 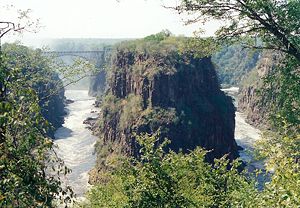 Victoria Falls gorge and bridge. The peninsular cliffs are in Zambia, the outer cliffs in Zimbabwe.

The only outlet to the chasm into which the river falls is a narrow channel, cut in the barrier wall at a point about two thirds of the distance along from the western end. This channel is about 100 feet wide, and the whole volume of the river pours through it for 394 feet before emerging into a zigzagging series of gorges about 50 miles long which conduct the river past the basalt plateau.

At the end of its first gorge, the river has hollowed out a deep pool called the Boiling Pot. About 492 feet across, its surface is smooth at low water, but at high water is marked by slow, enormous swirls and heavy boilings. As the river exits the Boiling Pot, the channel turns sharply westward and enters the next of the zigzagging gorges. The walls of the gorges are over 394 feet high.

In the wet season (typically October through April), the river discharges as much as 320,000 cubic feet of water per second. At this time, the water rolls over the main falls in an unbroken expanse. The dry season may see the falls diminish to just a few narrow cascades, with the spray and mist almost absent and the flow reduced to as little as 12,500 cubic feet per second. At this time it is possible to look into the normally obscured depths of the gorge. The level of the river in the gorge varies by up to 66 feet between maximum flow in April and the end of the dry season in October.

Just below the Boiling Pot, and almost at right angles to the falls, the gorge is spanned by a bridge, one of only five over the Zambezi river, which was completed in April 1905 and was initially intended as a link in Cecil Rhodes' Cape-Cairo railway plan. The bridge is 820 feet long, with a main arch spanning 492 feet, and the top of the bridge is 410 feet above the low-water level of the river. The bridge carries a road and railway linking the towns of Victoria Falls and Livingstone and the road and rail networks of Zambia and Zimbabwe. 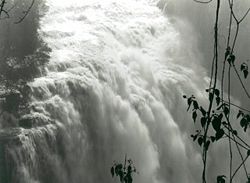 Before the railway link to Bulawayo was completed in 1905, the falls were not often visited. They were an increasingly popular attraction during British colonial rule of the area and the tourist town of Victoria Falls grew up on the Zimbabwe side. From the late 1960s onwards visitor numbers dropped due to Zimbabwe's "2nd Chimurenga" also known as the Rhodesian Bush War, which sometimes resulted in military incursions into Zambia. The hostilities caused the latter to impose travel restrictions, such as border closures and other security measures, including the stationing of soldiers to restrict access to the gorges and some parts of the falls.

Zimbabwean independence in 1980 brought comparative peace, and the 1980s saw a renewed surge in tourism, and the development of the region as a center for extreme sports played a large role in this. By the end of the 1990s, almost 300,000 people were visiting the falls annually, and this was expected to rise to over a million in the next decade.

The numbers of people visiting the Zimbabwe side of the falls has historically been much higher than the number visiting the Zambia side, due to the greater development of the visitor facilities there. However, the number of tourists visiting Zimbabwe began to decline in the early 2000s as civil unrest brewed surrounding the continuing rule of Robert Mugabe. In 2006, hotel occupancy on the Zimbabwean side hovered at around 30 percent, while the Zambian side was at near-capacity, with rates reaching US $630 per night. The rapid development has prompted the United Nations to consider revoking the Falls' status as a World Heritage Site. The two countries permit tourists to make day trips from one side to the other without the necessity of obtaining a visa in advance, but visas issued at the border are expensive. 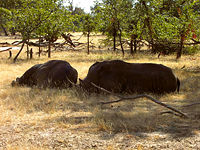 The falls are part of two, small, national parks, Mosi-oa-Tunya National Park in Zambia and Victoria Falls National Park in Zimbabwe, which contain abundant wildlife including sizable populations of elephants, buffalo, and giraffes. The river at this point also contains a large population of hippos.

Mosi-oa-Tunya national park provides a habitat for two white rhinos. The rhinos are the only white rhinos in Zambia, but are not indigenous, having been imported from South Africa. Within the park is a small cemetery at the site of the original British settlement in the area, Old Drift.

Retrieved from https://www.newworldencyclopedia.org/p/index.php?title=Victoria_Falls&oldid=1036828
Categories:
Hidden category:
This page was last edited on 8 May 2020, at 06:00.
Content is available under Creative Commons Attribution/Share-Alike License; additional terms may apply. See Terms of Use for details.