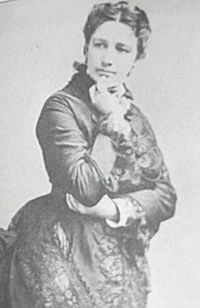 Victoria Claflin Woodhull (September 23, 1838 – June 9, 1927) was an American suffragist who was publicized in Gilded Age newspapers as a leader of the American woman's suffrage movement in the nineteenth century. She became a colorful and notorious symbol for women's rights, and labor reforms. The authorship of her speeches and articles is disputed. Some contend that many of her speeches on these subjects were not written by Woodhull herself, but her role as a representative of these movements was nonetheless powerful and controversial.

She is probably most famous for her declaration to run for the United States Presidency in 1872.

Woodhull was born into a poor family in Homer, Licking County, Ohio. She went from rags to riches twice, her first fortune being made on the road as a highly successful magnetic healer before she joined the spiritualist movement in the 1870s.

When she was just fifteen, Woodhull became engaged to twenty eight year old Canning Woodhull from a town outside of Rochester, New York. Dr. Woodhull was an Ohio medical doctor at a time when formal medical education and licensing was not required to practice medicine in that state. They married in November 1853 just a few short months after they met. Woodhull soon learned that her new husband was an alcoholic and a womanizer, and that her own work would often be required to support the family financially. The Woodhulls had two children: Byron and Zulu. According to one account, Byron was born mentally retarded in 1854, a birth defect his mother believed was caused by her husband's alcoholism. Another story says his retardation resulted from a fall from a window.

Woodhull’s support of free love probably originated with her first marriage. Even in loveless marriages, women in United States in the nineteenth century were bound into unions with few options to escape. Any woman who divorced was stigmatized and often ostracized by society. Woodhull believed women should have the choice to leave unbearable marriages, and she rallied against the hypocrisy of married men having mistresses. When she became a prominent national figure, her enemies falsely characterized her views on free love as advocating immorality. Woodhull in fact believed in monogamous relationships.

She made another fortune on the New York Stock Exchange with her younger sister named Tennessee, as the first female Wall Street brokers. Woodhull, Claflin & Company opened in 1870 with the assistance of a wealthy benefactor, her admirer, Cornelius Vanderbilt.

On May 14, 1870, she and Tennessee established a paper, Woodhull & Claflin's Weekly, which stayed in publication for the next six years, and became notorious for publishing controversial opinions on taboo topics (especially with regard to sex education and free love). The paper advocated, among other things, women's suffrage, short skirts, spiritualism, free love and vegetarianism. It's commonly stated that the paper also advocated birth control, but some historians disagree. The paper is now known primarily for printing the first English version of Karl Marx's Communist Manifesto in its December 30, 1871 edition.

Other feminists of her time, including Susan B. Anthony, disagreed with her tactics in pushing for women's equality. Some characterized her as opportunistic and unpredictable: in one notable incident, she had a run in with Anthony during a meeting of the NWSA. Woodhull and Anthony later became friends and aided each other in the womens rights movement.

Views on abortion and eugenics

Her opposition to abortion is frequently cited by Pro-life supporters when writing about first wave feminism. The most common Woodhull quotations cited by Pro-Lifers are:

"[t]he rights of children as individuals begin while yet they remain the foetus." [From an 1870 Woodhull & Claflin's Weekly article]

"Every woman knows that if she were free, she would never bear an unwished-for child, nor think of murdering one before its birth." [From an 1875 edition of the Wheeling, West Virginia Evening Standard]

One of her articles on abortion that is not cited by Pro-life supporters is from the September 23, 1871 issue of the Woodhull & Claflin's Weekly. She wrote:

"Abortion is only a symptom of a more deep-seated disorder of the social state. It cannot be put down by law... Is there, then, no remedy for all this bad state of things? None, I solemnly believe; none, by means of repression and law. I believe there is no other remedy possible but freedom in the social sphere."

Woodhull also promoted eugenics which was popular in the earlier twentieth century prior to World War II. Her interest in eugenics was likely motivated by the profound mental retardation of her son. She advocated, among other things, sex education, "marrying well," and pre-natal care as a way to bear healthier children and to prevent mental and physical disease. 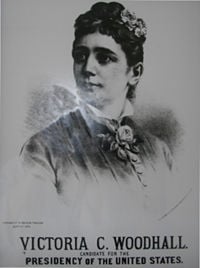 Victoria C. Woodhall In 1872 Victoria Woodhull became the first woman to campaign for US President.

In the year that Anthony cast her vote in the 1872 presidential election, Woodhull became the first woman put forward as a presidential candidate, nominated by the Equal Rights Party (with ex-slave Frederick Douglass running for Vice-President; Douglass never acknowledged this nomination, and it is possible that he saw it as an attempt to get "the colored vote"—black suffrage having been granted in the Fifteenth Amendment to the United States Constitution in 1870).

Victoria Woodhull was thirty four at the time. On the date of the inauguration, she would have been seven months shy of the constitutionally mandated age of 35, a technicality that was not emphasized until the twentieth century. It's a common misconception that her name did not appear on the ballot because she failed to meet the necessary legal requirements. In 1872, the President of the United States was not elected by the current Australian ballot method in which the government prints the ballots. Back then, political parties printed the ballots. The Washington Post claimed fifty years after the election that the Equal Rights Party did pass out ballots at the polls in 1872. Like many of Woodhull's protests, this was first and foremost a media performance, designed to shake up the prejudices of the day. It was not merely her gender that made Woodhull's campaign notable; her association with Frederick Douglass stirred up controversy about the mixing of races. The Equal Rights Party hoped to use these nominations to reunite suffragists with civil rights activists, as the exclusion of female suffrage from the Fifteenth Amendment two years earlier had caused a substantial rift.

Vilified in the media for her support of free love, Woodhull devoted an entire issue of Woodhull & Claflin's Weekly (November 2, 1872) to a rumored affair. This affair was between Elizabeth Tilton and Reverend Henry Ward Beecher, a prominent Protestant figure (who was a supporter of female suffrage). She wrote this article in order to highlight what she saw as a sexual double-standard between men and women.

The next day, United States Federal Marshals arrested Woodhull and Tennessee for sending obscene material through the mail. The sisters were held in the Ludlow Street Jail for the next month, a place normally reserved for civil offenses, but which contained more hardened criminals as well. The arrest was arranged by Anthony Comstock, the self-appointed moral defender of the nation at the time, and the event incited questions about censorship and government persecution. The Claflin sisters were found not guilty six months later, but the arrest prevented Woodhull from being present during the 1872 presidential election. The publication of the Beecher-Tilton scandal led, in 1875, to Theodore Tilton (husband of Elizabeth Tilton) suing Beecher for "alienation of affection." The trial was sensationalized across the nation, eventually resulting in a hung jury.

The trial depleted Woodhull's strength and optimism. She moved to England with her sister and mother. Woodhull spent her final years lecturing about the Bible, spiritualism and sexuality, with emphasis on the human body within the context of marriage and responsibility. While in England, Woodhull met John Biddulph Martin. They married in 1882. Martin owned an expansive estate, Woodhull became interested in new methods of agriculture. She divided up one of the estate farms and rented small shares to women where they could learn farming techniques. She hosted agriculture programs and funded a small school for women to learn a valuable skill. She died on June 9, 1927, in England at eighty eight years of age.

Retrieved from https://www.newworldencyclopedia.org/p/index.php?title=Victoria_Woodhull&oldid=1036829
Categories:
Hidden category:
This page was last edited on 8 May 2020, at 06:00.
Content is available under Creative Commons Attribution/Share-Alike License; additional terms may apply. See Terms of Use for details.