Toucan is the common name for any of the large-billed, long-tailed, tropical birds comprising the New World family Ramphastidae of the near-passerine order Piciformes, characterized by parrot-like zygodactyl feet, brightly colored plumage, and very large and colorful, but lightweight, bills. Toucans are closely related to the American barbets of the Capitonidae family and belong to the same order as the woodpeckers. Toucans are found in Central America, South America, the Caribbean, and southern Mexico. The family includes about 40 species classified into five genera.

Reflecting the principle of bi-level functionality, toucans provide a larger function for the ecosystem and for humans while advancing their own individual functions of survival and reproduction. Ecologically, they are integral to the health of their ecosystems, both as seed dispersers and as part of food chains. Toucans are largely fruit-eating, and as such disperse the seeds of various plants, while being consumed at various stages by such predators as eagles, big cats such as the jaguar, coatis, and snakes. For humans, these colorful birds are popular sights both in nature and in zoos.

The complexity of biological interactions is seen in the direct and indirect relationship of the large toco toucan (Ramphastos toco) and the hyacinth macaw (Anodorhynchus hyacinthinus). On the one hand, the toucan is of indirect benefit to the macaw's reproduction but being the main seed dispersal of the the manduvi tree, where the macaw often nests. On the other hand, the toucan is a key predator of the macaw's eggs.

Toucans, family Ramphastidae, are members of the order Piciformes, a taxon of six families of largely arboreal birds, the best-known of them being the Picidae, which includes the woodpeckers and close relatives. The Piciformes contain about 67 living genera with a little over 400 species, of which the Picidae (woodpeckers and relatives) make up about half. In general, the Piciformes are insectivorous, although the barbets and toucans mostly eat fruit and the honeyguides are quite unique among birds in being able to digest beeswax (their main foods is insects, however).

Toucans range in size from the lettered aracari (Pteroglossus inscriptus), at 130 grams (4.6 ounces) and 29 centimeters (11.5 inches), to the toco toucan (Ramphastos toco), at 680 grams (1.5 pounds) and 63 centimeters (29 inches). Their bodies are short (of comparable size to a crow's) and compact. The tail is rounded and varies in length, from half the length to the whole length of the body. The neck is short and thick. The wings are small, as they are forest-dwelling birds who only need to travel short distances, and are often of about the same span as the bill-tip-to-tail-tip measurements of the bird. A toucan's tongue is long (up to 14 to 15 centimeters, or 6 inches), narrow, gray, and singularly frayed on each side, adding to its sensitivity as an organ of taste. 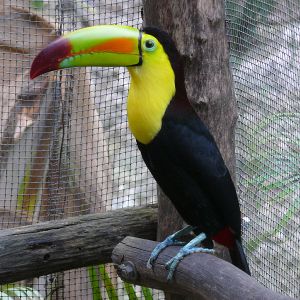 The legs of a toucan are strong and rather short. They have zygodactyl feet, with two toes forward and two back, arranged in pairs with the first and fourth toes turned backward.

The colorful, giant bill of toucans, which in some large species measure more than half the length of the body, is the hallmark of the family. Despite its size, the bill is very light, being composed of bone struts with little solid material between them. The bill has forward-facing serrations resembling teeth, which historically led naturalists to believe that toucans captured fish and were primarily carnivorous, but today it is known that they eat mostly fruit.

The plumage of toucans is often brightly colored. The feathers in the genus containing the largest toucans are generally black, with touches of white, yellow, and scarlet. The underparts of the araçaris (smaller toucans) are yellow, crossed by one or more black or red bands. The toucanets have mostly green plumage with blue markings.

The majority of toucans do not show any sexual dimorphism in their coloration, the genus Selenidera being the most notable exception to this rule (hence their common name, "dichromatic toucanets"). However, the bills of female toucans are usually shorter, deeper, and sometimes straighter, giving more of a "blocky" impression compared to male bills.

Why the bill is so large and brightly colored is still debated and may be complex. As there is no sexual dimorphism in the bill's coloration, it is unlikely to be a sexual signal. It does aid in their feeding behavior (as they sit in one spot and reach for all fruit in range, thereby reducing energy expenditure). It has also been theorized that the bill may intimidate smaller birds, so that the toucan may plunder nests undisturbed (see behavior). Also, the beak allows the bird to reach deep into treeholes to access food unavailable to other birds, and also to depredate suspended nests built by smaller birds.

A structural complex probably unique to toucans involves the modification of several tail vertebrae. The rear three vertebrae are fused and attached to the spine by a ball-and-socket joint. Because of this, toucans may snap their tail forwards until it touches the head (Reynolds 2002). This is the posture in which they sleep, often appearing simply as a ball of feathers, with the tip of the tail sticking out over the head.

The name of this bird group is derived from Tupi tucana, via French. 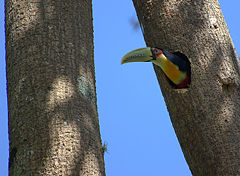 Toucans, like this red-breasted toucan (Ramphastos dicolorus), nest in hollows in trees

Toucans are primarily frugivorous (fruit eating), but are opportunistically omnivorous and will take prey such as insects and small lizards (Ramsen et al. 1993). Captive toucans have been reported to actively hunt insects in their cages, and it is possible to keep toucans on an insect-only diet. They also plunder nests of smaller birds, taking eggs and nestlings (Robinson 1985). This probably provides a crucial addition of protein to their diet. However, in their range, toucans are the dominant frugivores, and as such play an extremely important ecological role as vectors for seed dispersal of fruiting trees (Pizo et al. 2008).

Toucans are arboreal and typically lay 2–4 white eggs in their nests. They make their nests in already-existing treeholes, like natural cavities and holes excavated by other animals such as woodpeckers. The toucan bill has very limited use as an excavation tool and thus they are dependent on existing treeholes. When the eggs hatch, the young toucans emerge completely naked, without any down.

Toucans are resident breeders and do not migrate. Toucans are usually found in pairs or small flocks. They sometimes fence with their bills and wrestle, which scientists hypothesize they do to establish dominance hierarchies.