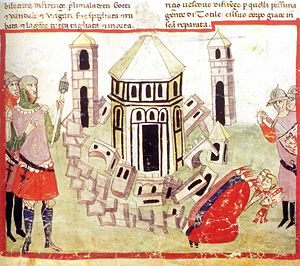 Totila (died July 1, 552) was king of the Ostrogoths from 541 until his death. He waged the Gothic War against the Byzantine Empire for the mastery of Italy. Most of the historical evidence for Totila consists of chronicles by the Byzantine historian Procopius, who accompanied the Byzantine general Belisarius during the Gothic War. During his reign, Totila attempted to initiate reforms and relations reminiscent of those instituted by his successor, Theodoric the Great, but was ultimately unable to achieve such a feat.[1]

Totila was one of the final kings of the Ostrogoths. After he was slain in the Battle of Taginae, the Ostrogoths began a rapid decline and were soon overtaken by the eastern Roman armies of Narses.[2] Admired for his achievements, Totuila is considered second only to Theodoric the Great among the Ostrogoth kings. He attempted to bring Italians and Goths together under his rule, while reasserting Ostrogothic power in Italy. During his reign, he faced the most intense battles that the Ostrogoths ever encountered.[3]

He was virtuous and loyal to his peers and subjects. He instilled in his army a desire to be prosperous for their own, as well as for the sake of their kingdom. He set high standards for his men and his subjects, as well as for himself. His personal traits, military fortitude, and eagerness to build a harmonious and powerful empire combined to make him an admirable figure who struggled diligently to see to the success of his kingdom, a goal that he was ultimately unable to accomplish. This was a time when the old order represented by the Roman Empire was disappearing and different entities and polities were competing within what had been the Roman space. In the shifting political landscape through which Totila had to navigate, he tried to carve out a kingdom within which not only his own people but those of different cultural background could live in peace and stability, although most of his life was spent fighting rival polities.

"Totila" was the nom de guerre of a man whose real name was Baduila, as can be seen from the coinage he issued. "Totila" is how he was referred to by the historian Procopius. Born in Treviso, Totila was elected king after the death of his uncle Ildibad, having engineered the assassination of Ildibad's short-lived successor, his cousin Eraric in 541. The official Byzantine position, adopted by Procopius and even by the Romanized Goth Jordanes, writing just before the conclusion of the Gothic Wars, was that Totila was a usurper: Jordanes' Getica (551) overlooks the recent successes of Totila.[4]

His life's work was the restoration of the Gothic kingdom in Italy and he entered upon the task from the very beginning of his reign, collecting together and inspiring the Goths, defeating a poorly-led Byzantine attack on the Gothic stronghold of Verona in the winter of 541 and scattering the stronger Byzantine army at Faenza (Battle of Faventia) in the spring of 542.[5]

Having gained another victory in 542, this time, avoiding stoutly defended Florence, in the valley of Mugello, where Totila showed his nature by treating his prisoners so well that they were induced to serve under his banner, he left a well-defended Tuscany with his enlarged forces, while three of the Byzantine generals withdrew from Florence, dividing their forces, to Perugia, to Spoleto and Rome, cities which Totila would have to take by siege.

In the meantime, instead of pursuing the conquest of central Italy, where the Imperial forces were too formidable for his small army, he decided to transfer his operations to the south of the peninsula,[6] where he captured Beneventum and received the submission of the provinces of Lucania and Bruttium, Apulia and Calabria, essentially the whole of the Greek south; their Imperial taxes were now diverted to his benefit.

Totila's strategy was to move fast and take control of the countryside, leaving the Byzantine forces in control of well-defended cities, and especially the ports. When Belisarius eventually returned to Italy, Procopius relates that "during a space of five years he did not succeed once in setting foot on any part of the land... except where some fortress was, but during this whole period he kept sailing about visiting one port after another."[7] Totila circumvented those cities where a drawn-out siege would have been required, but razing the walls of cities that capitulated to him, such as Beneventum. Totila's conquest of Italy was marked not only by celerity but also by mercy, and Gibbon says "none were deceived, either friends or enemies, who depended on his faith or his clemency." After a successful siege of a resisting city, such as at Perugia, however, Totila could be merciless, as the Byzantine historian Procopius recounts. Procopius also left a word portrait of Totila before his troops drawn up for battle:

The armor in which he was clad was abundantly plated with gold and the ample adornments which hung from his cheek plates as well as his helmet and spear were not only purple, but in other respects befitting a king ... And he himself, sitting upon a very large horse, began to dance under arms skillfully between the two armies. And as he rode he hurled his javelin into the air and caught it again as it quivered above him, then passed it rapidly from hand to hand, shifting it with consummate skill.

Procopius's picture is given an uncharacteristic setting, for Totila generally avoided formal battles with opposing armies drawn up in battle array and excelled at skirmishing. A siege was required at Naples, however, where the report of Totila's courteous treatment of Romans at Cumae and other surrounding towns undermined morale. Justinian was alarmed, but jealousy kept his one brilliantly competent general Belisarius at Constantinople. An attempt to relieve Naples by sea was badly bungled when Totila was informed during unnecessary delays, and a storm dispersed a second attempt, delivering the general, Demetrius, into Totila's hands. Totila offered generous terms and Conon's starving garrison at Naples opened their gates in the spring of 543.

On this occasion Totila exhibited a considerable humanity which was not to be expected, as the historian Procopius remarks, from an enemy or a barbarian. He knew that if an abundance of food were at once supplied, the famished inhabitants would gorge themselves to death. He posted sentinels at the gates and in the harbor and allowed no one to leave the city. Then he dealt out small rations, gradually increasing the quantity every day until the people had recovered their strength. The terms of the capitulation were more than faithfully observed. Conon and his followers were embarked in ships with which the Goths provided them, and when, deciding to sail for Rome, they were hindered by contrary winds, Totila furnished horses, provisions, and guides so that they could make the journey by land.[6]

The fortifications were partly razed. Totila spent the following season establishing himself in the south and reducing pockets of resistance, while the unpaid Imperial troops in central Italy made such poor reputations pillaging the countryside that when Totilas turned his attention to taking Rome, he was able proudly to contrast Goth and Greek behavior in his initial negotiations with the senate. They were refused, however, and all the Arian priests were expelled from the city, on suspicion of collaboration.

Towards the end of 545 the Gothic king took up his station at Tivoli and prepared to starve Rome into surrender, making at the same time elaborate preparations for checking the progress of Belisarius who was advancing to its relief. Pope Vigilius fled to the safety of Syracuse; when he sent a flotilla of grain ships to feed the city, Totila's navy fell on them near the mouth of the Tiber and captured the fleet. The imperial fleet, moving up the Tiber and led by the great general, only just failed to succor the city, which must then, perforce, open its gates to the Goths.

It was plundered, although Totila did not carry out his threat to make it a pasture for cattle, and when the Gothic army withdrew into Apulia it was from a scene of desolation. But its walls and other fortifications were soon restored, and Totila again marched against it. He was defeated by Belisarius, who, however, did not follow up his advantage. Several cities including Perugia were taken by the Goths, while Belisarius remained inactive and then was recalled from Italy. In 549 Totila advanced a third time against Rome, which he captured through the treachery of some of its starving defenders.

Totila's doubtless historical meeting with Benedict of Nursia at Monte Cassino preserved in Pope Gregory I's Dialogues,[8] whether before or soon after the siege of Naples (the Benedictines' traditional date is March 21, 543), has been embellished in the telling with the abbot's discernment of an aide of Totila's, his sword-bearer Riggio, dressed in royal robes, as an impostor and his predictions for Totila, who knelt to him, a favorite subject for Italian painters.

His next exploit was the conquest and plunder of Sicily, after which he subdued Corsica and Sardinia and sent a Gothic fleet against the coasts of Greece. By this time the emperor Justinian I was taking energetic measures to check the Goths. The conduct of a new campaign was entrusted to the eunuch Narses; Totila marched against him and was defeated and killed at the Battle of Taginae (also known as the Battle of Busta Gallorum) in July 552, which brought an end to the long struggle between Byzantium and the Ostrogothic Kingdom in Italy, and left the Eastern Emperor for the time being in control of Italy.

Totila is admired for his achievements and is considered second in success among Ostrogothic rulers, outranked only by Theodoric the Great. Totila attempted to bring together Italians and Goths under his rule, while reasserting Ostrogothic power in Italy. During his reign, he faced the most intense battles encountered by the Ostrogoths.[3]

Totila embraced the Italians into the Gothic kingdom, attempting to treat them with courtesy as equals. He was virtuous and loyal to his peers and subjects. Totila instilled in his army a desire to be prosperous for their own, as well as their kingdom's sake. He set ambitious standards for his men and his subjects, as well as for himself. His personal traits, military fortitude, and eagerness to build a harmonious and powerful empire combined to render him an admirable figure who struggled diligently to see to the success of his kingdom, a goal that he was ultimately unable to accomplish.[9]