Ijmāʿ (إجماع) is an Arabic term referring ideally to the consensus of the ummah (the community of Muslims, or followers of Islam). This concept is fundamental to Sunni Islam, which regards authority in matters of religion and also in politics as belonging corporately to the whole ummah, or community. No single individual can claim a special or privileged right of interpretation, or of determining what is or is not an authentic Islamic practice or belief. In practice, it has often been scholars who have claimed the right to exercise ijma’, although many basic tenets of Islam were established by community consensus, such as the political system known as the caliphate, the canonical collections of hadith (acts and words of Muhammad), the five pillars, recognition of the four legal schools. Any legal deduction using analogy or another tool of legal reasoning also has to be accepted by ijma’ before it can be incorporated within Islamic Law. Many Muslims regard ijma’, together with the principle of shura (consultation) as essentially democratic ideals within an Islamic framework where lawmaking is a divine, not a human prerogative but where humans must interpret what God says through God’s revelations.

Origin of the Term 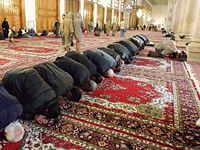 Muslims at Prayer. The account containing the details of prayer is found in the collections of hadith. It was ijma' that decided the legitimacy of these collections.

The hadith of Muhammad which states that "My community will never agree upon an error" is often cited as support for the principle ijma'.[1] During the life-time of the prophet Muhammad, his authority was recognized by the Muslim community, which was itself based on the consensus that his rulings were inspired and his sunnah, or example, the best model, based on Qur’an 33: 31 and on 4: 59 which says that any dispute should be referred to “God and to the Prophet.” Muhammad, too, is said to have consulted his senior companions, since the Qur’an describes Muslims as those who “conduct their affairs by mutual consultation” (shura) (42: 38 and 3: 159). Following Muhammad’s death, it was ijma’ that decided to establish the caliphate to govern the community. The caliph was regarded as Muhammad’s deputy in terms of the temporal leadership of the community and as a symbol of spiritual unity but unlike Muhammad he was not inspired, or received fresh revelations. Ijma’ determined that the process of revelation ended with Muhammad’s death, which is implied by the Qur’an’s claim to be complete and definitive. Sunni Muslims came to regard ijma as the third fundamental source of Sharia law, after the divine revelation of the Qur'an and the prophetic practice or Sunnah although it can be argued that the content of both of the former was also set by ijma’. After the canon of the Qur’an had been set under caliph Uthman (d. 56 C.E.) and the six sound collections of hadith had been gathered by the end of the ninth century, it was consensus that established these as official, not a proclamation or decree issued by the caliph. The details of the five obligatory duties, known as the five pillars are found in the sunnah, so it can be said that they too rest on ijma’. In other words, the account contained in the traditions of Muhamamd receiving the five prayers from God via Gabriel, and being instructed in their performance by the latter, is contained in the sunnah and it was ijma that accepted the legitimacy of this account. Similarly, recognition of the four legal schools as representing the culmination of the process by which the scope of Islamic Law was extended, and the notion that this process was now complete was determined by ijma’. There was no decree by a single figure of authority saying that this was the official position. The first caliph, Abu Bakr, made it clear that he did not possess any unique authority, saying ‘obey me as long as I obey God and His apostle, and if I disobey them you owe me no allegiance.”[2] Although technically, the third source of Sunni jurisprudence, then, as Muhammad Iqbal said, ijma' can be considered "the most important legal concept in Islam."[3] Shi'a Muslims, who believed that the family of Muhammad continued to be inspired, and that only a descendant of Muhammad should lead the community, parted company from Sunni Muslims over the issue of the how the community should be governed. While Sunni Islam is based on ijma’, Shi’a is based on obedience to the Imam, or descendant of Muhammad.[4]

Debate about the scope of ijma’

While the hadith, “My community shall not agree in error” appears to refer to the whole community, ijma’ in practice has been limited to a smaller number of Muslims. Abu Bakr was appointed or selected as caliph following a type of consultative process. However, not all Muslims were not present and those that were had not been elected or delegated by those who were absent. On the other hand, Muslims were then asked to swear an oath of loyalty to the caliph, which is said to represent a public endorsement. As time passed, the notion gained currency that ijma’ should be exercised by scholars on behalf of the whole community, since their knowledge of the Qur’an and sunnah qualified them for the task. There was also a power struggle between the caliphs and the religiously trained scholars, both of whom wanted to control the legal system. Some cite such Qur’anic verses as 6: 165, 12: 76; 43: 32; 58: 11 which describe “some” as being “raised in rank” above others, as possessing “knowledge” to justify the claim that certain people have greater authority. This claim, though, is based on their character and morality not on their social status, and can be said to itself depend on ijma’. Another Qur’anic verse, 3: 7 says that only God and “those who are firmly grounded in knowledge” know the meaning of certain passages of the Qur’an, although the sentence in question is also read differently.[5]

Various proponents of liberal movements within Islam criticize the view that ijma' is only a consensus among traditional Islamic scholars (Arabic ulema). They claim that truly democratic consensus should involve the entire community rather than a small and conservative clerical class, especially since there is no hierarchical system in Islam. They point out that even in the sound collections, hadith are classed as strong and as weak and that debate on authenticity remains open.[6] The idea that Islamic Law exists in a definitive, immutable form also attracts criticism that this elevates human interpretation to the status of divine write. Such Muslims argue that Islamic Law is a more flexible construct that allows for old opinions to be revisited in the light of new knowledge, and that only the sources should be regarded as infallible, not those who interpret them, however pious, honest and gifted. The principles of Ijma' and shura have also been equated with democracy. Muhammad Iqbal considered democracy to be "the most important aspect of Islam regarded as a political ideal." Democracy, he wrote, is "the best form of government" for any society.[7]

Retrieved from https://www.newworldencyclopedia.org/p/index.php?title=Ijma%27&oldid=1009351
Categories:
Hidden category:
This page was last edited on 24 February 2018, at 22:50.
Content is available under Creative Commons Attribution/Share-Alike License; additional terms may apply. See Terms of Use for details.