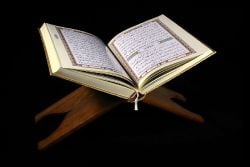 The Qur'an opened, resting on a stand

Ijtihad (Arabic اجتهاد) is a technical term of Islamic law that describes the process of making a legal decision by independent interpretation of the legal sources, the Qur'an and the Sunnah. The opposite of ijtihad is taqlid, Arabic for "imitation." A person who applied ijtihad was called a mujtahid, and traditionally had to be a scholar of Islamic law or alim.

Sometime during the ninth century, the majority of Sunni decided that ijtihad could no longer be exercised, and that the legal corpus created by the four Imams now represented the complete body of Islamic Law. Subsequently, scholars interpreted this corpus but, technically, could not deduce new rulings. In practice, a fresh interpretation often did represent a new ruling. In Shi'a Islam, the most senior jurists continue to practice ijtihad on behalf of the Hidden Imam. What has been described as the “closing of the gate of ijtihad” has never had universal support, however. Ibn Taymiyyah argued for its revival, as did many Muslim scholars in the nineteenth and twentieth centuries.

The word ijtihad derives from the Arabic verbal root jahada "struggle," the same root as that of jihad; the ‘t’ is inserted because the word is a form VIII verb. The common etymology is worth noting, as both words touch on the concepts of struggle or effort. In the case of form VIII verbs, this means to "struggle with oneself," as through deep thought. Ijtihad is a method of legal reasoning that does not rely on the traditional schools of jurisprudence, or madhabs. Kamali defines Ijtihad as “the effort a jurist makes in order to deduce the law, which is not self-evident, from its sources.”[1]

Given that relatively few verses of the Qur’an are explicitly legal in content, situations arose when the scope of Islamic Law had to be extended. First, the jurists turned to the sayings of Muhammad. Next, they used analogy (qiyas), although any deductions made were then subject to the Ijma', or consensus, of their fellow jurists if not of all Muslims. If these processes still did not solve the issue they were considering, the scholar made a mental effort to deduce a position consistent with the ethos, ethics, and spirit of Islam. No deduction that obviously contradicted an accepted Islamic position would be acceptable. The validity of a ruling deduced by means of ijtihad rested in the main on the scholar’s personal reputation as much for piety as for learning. Even so, in order to be recognized as part of the corpus of law, other jurists also had to express their approval. Rippin thus explains that ijma' (consensus) was the principle that ultimately validated ijtihad just as it did use of analogy, "if no dissenting voices were heard by the time of the following generation, then it could be taken that ijma' had confirmed a ruling."[2]

Examples of ijtihad include the ruling that everyone would receive the same sum from the public treasury, and 'Uthman's opinion that all people should read the Qur'an according to Zayd's way of recitation.[3] He also exercised ijtihad in commissioning Zayd to determine the correct content of the Qur'an and in his endorsement of this as caliph.

In early Islam ijtihad was a commonly used legal practice, and was well integrated with the philosophy of kalam, its secular counterpart. It slowly fell out of practice for several reasons, most notably the efforts of the Asharite theologians, who saw it as leading to errors of over-confidence in judgment. Al-Ghazali was the most notable of these, and his The Incoherence of the Philosophers was the most celebrated statement of this view.

It is debated whether Al-Ghazali was observing or creating the so-called "closure of the door of ijtihad." Some say this had occurred by the beginning of the tenth century C.E., a couple of centuries after the finalizing of the major collections of hadith. In the words of Joseph Schacht, "hence a consensus gradually established itself to the effect that from that time onwards no one could be deemed to have the necessary qualifications for independent reasoning in religious law, and that all future activity would have to be confined to the explanation, application, and, at the most, interpretation of the doctrine as it had been laid down once and for all."[4] This theory has been put in question recently by Wael Hallaq, who writes that there was also always a minority that claimed that the closing of the door is wrong, and a properly qualified scholar must have the right to perform ijtihad, at all times, not only up until the four schools of law were defined.[5]

What is clear is that long after the tenth century the principles of ijtihad continued to be discussed in the Islamic legal literature, and other Asharites continued to argue with their Mutazilite rivals about its applicability to sciences.

Al-Amidi (1233) mentions twelve common controversies about ijtihad in his book about usul al-fiqh (the theory of Islamic law) amongst others the question if the Prophet himself depended on ijtihad.

In Islamic political theory ijtihad is often counted as one of the essential qualifications of the caliph, for example, by Al-Baghdadi (1037) or Al-Mawardi (1058). Al-Ghazali dispenses with this qualification in his legal theory and delegates the exercise of ijtihad to the Ulema.

Ironically, the loss of its application in law seems to have also led to its loss in philosophy and the sciences, which most historians think caused Muslim societies to stagnate before the 1492 fall of al-Andalus, after which Muslim works were translated and led in part to the revival of classical works during the Renaissance, using improved methods, although the Muslims themselves were no longer using these methods in their daily life at all. Sardar argues that once imitation had become "the dominant paradigm of Islamic civilization... Islamic science truly became a matter of history," while "Muslim civilization" itself decayed.[6]

Twelver-Shi'a hold that the Imams and senior jurists have the right and responsibility to exercise ijtihad. Following the "occultation" of the 12th Imam, there was disagreement between the Akbari and the Usuli (two legal schools) about the continued validity of ijtihad. The Usuli won.

Twelvers believe that they should follow, or imitate (taqlid) the example of a living teacher, not of a dead man. Thus, twelvers choose a jurist as their "point of emulation," whose opinions and judgments they consider binding. These die with them. Only the highest jurists can function as mujtahid, and as such speak on behalf of the Hidden Imam.

Muslims living in the West are subject to secular laws of the state rather than Islamic Law. In this context ijtihad becomes mainly a theoretical and ideological exercise without any legal force. 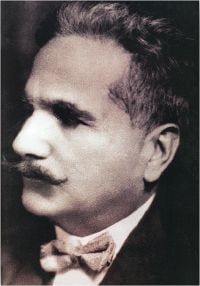 Conservative Muslims say that most Muslims do not have the training in legal sources to conduct ijtihad. They argue that this role was traditionally given to those who have studied for a number of years under a scholar. However, Liberal movements within Islam generally argue that any Muslim can perform ijtihad, given that Islam has no generally accepted clerical hierarchy or bureaucratic organization. However, conservative Muslims such as Muhammad ibn Abd-al-Wahhab as well as liberal Muslims such as Muhammad Iqbal have advocated the re-opening of the door, or gate of ijtihad. The difference between these two types of Muslim is the degree to which ijtihad can be exercised, as Bennett comments; “Muslims from the right, such as Mawdudi, and from the left… all want Muslims to revive ijtihad. However, for the right the areas in which any new interpretation may be developed are limited to certain civil matters, such as taxation and banking, while for the left what emerges as Islamic Law will be radically different from traditional Sharia” so that even Qur’anic punishments can be re-visited. In this view, what needs to be preserved is the intent or principle involved, not the specific penalty.[7]

Iqbal suggested that the so-called "closing of the door of ijtihad" was a "pure fiction suggested partly by the crystallization of legal thought in Islam, and partly by that intellectual laziness which, especially in the period of spiritual decay, turns great thinkers into idols." He linked the revival of ijtihad with the development of democratic institutions based on the Islamic principle of Ijma', thus "The transfer of the power of ijtihad from individual representatives of schools to a Muslim legislative assembly which... is the only possible form ijma' can take in modern times, will secure contributions to legal discussion from laymen who happen to possess a insight into affairs."[8] There is, said Iqbal, "no aristocracy in Islam," which affirms the "absolute equality of all the members of the community."[9] On March 19, 2004, a meeting on Ijtihad took place in Washinton D.C., hosted by the US Institute for Peace which was co-hosted by the Center for the Study of Islam and Democracy. [10]

Retrieved from https://www.newworldencyclopedia.org/p/index.php?title=Ijtihad&oldid=1046727
Categories:
Hidden category:
This page was last edited on 19 December 2020, at 00:00.
Content is available under Creative Commons Attribution/Share-Alike License; additional terms may apply. See Terms of Use for details.