Copepods are a group of generally minute aquatic crustaceans found in marine waters and nearly every freshwater habitat. Crustaceans (subphylum Crustacea), the group of arthropods (phylum Arthropoda) that includes the familiar crabs, lobsters, shrimps, barnacles, krill, and crayfish, are characterized by having branched (biramous) appendages, an exoskeleton made up of chitin and calcium, two pairs of antennae that extend in front of the mouth, and paired appendages that act like jaws. A copepod is characterized by a teardrop shaped body, large antennae, and, at least in the larval stage, a single, simple eye in the center of its head.

Copepods sometimes are classified together with barnacles in the class Maxillopoda, and sometimes in their own class Copepoda. The group contains ten orders with some 14,000 described species.

Copepods are generally small, about one to two millimeters (0.04 to 0.08 inches), although the parasitic Pennella sp., the largest copepod in the world, grows to nearly 0.3 meters (Birtles and Arnold 2002). Although, like other crustaceans, copepods have an armored exoskeleton, they are so small that in most species this armor, and the entire body, is almost totally transparent.

Ironically, this tiny organism's presence in public tap water in New York City became a source of religious controversy in the Jewish faith, regarding whether unfiltered tap water was kosher (see ecology section and discussion section).

Many species of copepods are planktonic, but they may also be found in other habitats, including wet terrestrial environments, underground caves, stream beds, on the bottom of bodies of water, and as parasites of fish, marine mammals, and other invertebrates. Copepods can be very important ecologically, as a key part of food chains, consuming bacteria and phytoplankton, and being consumed by small fish, whales, seabirds, and other crustaceans such as krill. There may be millions in a cubic meter of ocean. Being the largest biomass in the oceans, they have been called the insects of the sea (Durbaum and Kunnemann 2006).

A scientist who studies copepods is a copepodologist.

Copepods are typically one to two mm long, with an elongated body, forked tail, and large antennae. Some free-living polar copepods reach one cm. Pennella sp. is a parasitic copepod of the fin whale; it grows to 30 cm and can appear as if a piece of fishing line or a tag, hanging from the skin (Birtles and Arnold 2002). Pennella sp. embeds its head in the blubber of the whale and feeds on its blood and inflamed tissue (Bridges and Arnold 2002). 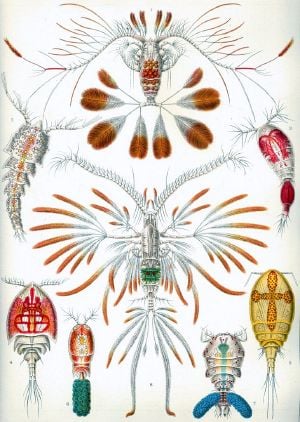 Most smaller copepods feed directly on phytoplankton and bacteria, catching cells singly, but a few of the larger species are predators of their smaller relatives. Herbivorous copepods, particularly those in rich cold seas, store up energy from their food as oil droplets while they feed in the spring and summer plankton blooms. These droplets may take up over half of the volume of the body in polar species.

For most copepods, their small size renders their armored exoskeleton and entire body to be transparent. The single eye in a copepod is located in the center of the transparent head and is usually bright red.

Many species have neurons surrounded by myelin, which is very rare among invertebrates (other examples are some annelids and malacostracan crustaceans like palaemonid shrimp and penaeids). Even rarer is the fact that the myelin is highly organized, resembling the well-organized wrapping found in vertebrates (Gnathostomata).

Slow-motion macrophotography video (50 percent) of juvenile Atlantic herring (38 mm) feeding on copepods. The fish approach from below and catch each copepod individually. In the middle of the image a copepod escapes successfully to the left.

Some copepods are very evasive and can jump with extreme speed over a few millimeters. This scene to the right was scanned with the ecoSCOPE, an underwater high speed microscope. Very little is known about the details of these kinds of predator/prey interactions, in spite of their importance for global processes, because copepods are difficult to keep in the laboratory and lose most of their escape capacity, and herring are very fast, alert and evasive organisms and flee normal camera systems or scuba divers.

Copepods are widely distributed in aquatic and semi-aquatic environments. Many species of copepods are planktonic, but many are also benthic, and some continental species may live in limno-terrestrial habitats and other wet terrestrial places, such as swamps, under leaf fall in wet forests, bogs, springs, ephemeral ponds and puddles, compost heaps, damp peat moss, or water-filled recesses (phytothelmata) of plants such as bromeliads and pitcher plants. Many live underground in marine and freshwater caves, sinkholes, or stream beds. Species of the Calanoida, Cyclopoida, and Harpacticoida having colonized habitats from small creeks to high Himalayan glacier lakes (Durbaum and Kunnemann 2006).

At least one third of the known species of copepods live as parasites on, or symbionts with other animals (Durbaum and Kunnemann 2006). They may attach themselves to fish, sharks, marine mammals, and many kinds of invertebrates such as mollusks, tunicates, or corals.

Planktonic copepods are important to global ecology and the carbon cycle.

Copepods are usually the dominant members of the zooplankton, and are major food organisms for small fish, whales, seabirds, and other crustaceans such as krill in the ocean and in fresh water. Some scientists say they form the largest animal biomass on earth. They compete for this title with Antarctic krill (Euphausia superba).

Because of their smaller size and relatively faster growth rates, however, and because they are more evenly distributed throughout more of the world's oceans, copepods almost certainly contribute far more to the secondary productivity of the world's oceans, and to the global ocean carbon sink, than krill, and perhaps than all other groups of organisms together. The surface layers of the oceans are currently believed to be the world's largest carbon sink, absorbing about two billion tons of carbon a year, the equivalent to perhaps a third of human carbon emissions, thus reducing their impact. Many planktonic copepods feed near the surface at night, then sink into deeper water during the day. Their molted exoskeletons, fecal pellets, and respiration all bring carbon to the deep sea.

Copepods are sometimes found in the public main water supply, especially systems where the water is not filtered, such as New York City and Boston, Massachusetts. This is not usually a problem in treated water supplies. In some tropical countries, such as Peru and Bangladesh, a correlation has been found between copepods and cholera in untreated water, because the cholera bacteria attach to the surfaces of planktonic animals. The risk of cholera from infected water can be reduced by filtering out the copepods (and other matter), for example with a cloth filter.

In 2004, in New York City, the presence of copepods in tap water became controversial when spotted by Jewish rabbis in Brooklyn, because of clashing views on whether consumption of such unfiltered water violates the biblical prohibition against eating visible waterborne creatures that lack fins and scales (Berger 2004).

Retrieved from https://www.newworldencyclopedia.org/p/index.php?title=Copepod&oldid=1065095
Categories:
This page was last edited on 17 February 2022, at 19:34.
Content is available under Creative Commons Attribution/Share-Alike License; additional terms may apply. See Terms of Use for details.