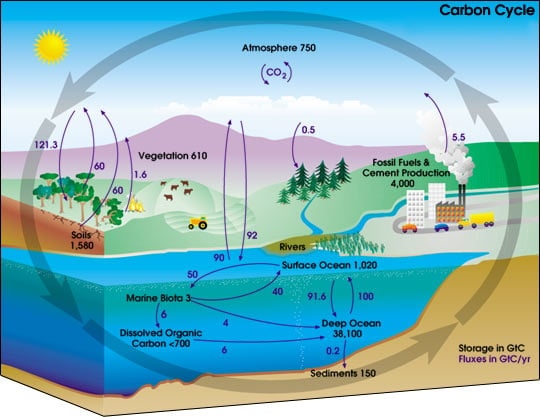 The carbon cycle is the biogeochemical cycle by which carbon is exchanged between the biosphere, geosphere, hydrosphere, and atmosphere of the earth. (Other planetary bodies may have carbon cycles, but little is known about them.)

The cycle is usually thought of as four main reservoirs of carbon, interconnected by pathways of exchange. These reservoirs are the atmosphere, terrestrial biosphere, oceans, carbonate rocks, and sediments (as organic matter, including fossil fuels). The movement of carbon—the carbon exchanges between reservoirs—occurs because of various chemical, physical, geological, and biological processes. Overall, the carbon cycle reveals the harmonious coordination between different biotic and abiotic elements on Earth.

The carbon cycle is central to understanding issues related to climate change. In resolving the divergent positions with respect to increases of carbon dioxide in the atmosphere and global warming, it is important that scientists maintain integrity in collecting, analyzing, and presenting data in the face of often strong political, commercial, and environmental agendas.

Carbon in the atmosphere

Carbon exists in the Earth's atmosphere primarily as the gas carbon dioxide (CO2). Although it comprises a very small part of the atmosphere overall (approximately 0.04 percent), it plays an important role in supporting life. Other gases containing carbon in the atmosphere are methane and chlorofluorocarbons (the latter are entirely artificial and are now strictly prohibited under the Montreal Protocol).

Carbon exchange with the atmosphere, biosphere, and oceans

Utilizing light from the sun, plants and algae perform photosynthesis to convert carbon dioxide, water, and sunlight into carbohydrates (C6H12O6, releasing oxygen in the process. This process removes carbon dioxide from the atmosphere and stores it in plant biomass, which may eventually get buried in sediments after the plant dies.

Respiration occurs when the biomass from photosynthetic plants and algae is consumed by animals, fungi, or bacteria, either while the plant is alive, or after it has died. The chemistry of this process is as follows:

This is essentially the reverse process of photosynthesis, releasing CO2 back into the atmosphere. However, more material is photosynthesized than is respired (since a portion of the organic matter is buried in the sediments), thus more oxygen enters the atmosphere than does carbon dioxide as a result of these two processes.

Outgassing of volcanoes and mid-ocean ridges is the largest source of carbon dioxide in the atmosphere, releasing carbon dioxide from deep within the Earth that had been trapped there since the planet's creation. CO2 is released from subduction zones through metamorphism of carbonate rocks subducting with the ocean crust. Not all of this CO2 enters the atmosphere. Some of it dissolves in the oceans and some remains in biomass of organisms.

Weathering is a mechanism that removes carbon from the atmosphere. When carbon dioxide dissolves in water, it forms carbonic acid. This acid is used to weather rocks, yielding bicarbonate ions in addition to other ions (depending on the mineral content of the rock). The bicarbonate ion enters oceans through fresh water systems, and in the ocean, the bicarbonate ion combines with a calcium ion to form calcium carbonate and a by product of carbon dioxide and water. The calcium carbonate is used by marine organisms to form calcareous shells, and corals use it in their exoskeletons.

The solubility pump is a physico-chemical process that transports carbon (as dissolved inorganic carbon) from the ocean's surface to its interior.

The solubility pump is driven by the coincidence of two processes in the ocean:

Since deep water (that is, seawater in the ocean's interior) is formed under the same surface conditions that promote carbon dioxide solubility, it contains a higher concentration of dissolved inorganic carbon than one might otherwise expect. Consequently, these two processes act together to pump carbon from the atmosphere into the ocean's interior.

One consequence of this is that when deep water upwells in warmer, equatorial latitudes, it strongly outgasses carbon dioxide to the atmosphere because of the reduced solubility of the gas.

Carbon dioxide, like other gases, is soluble in water. However, unlike many other gases (oxygen for instance), it reacts with water and forms a balance of several ionic and non-ionic species (collectively known as dissolved inorganic carbon, or DIC). These are dissolved free carbon dioxide (CO2 (aq)), carbonic acid (H2CO3), bicarbonate (HCO3-), and carbonate (CO32-), and they interact with water as follows :

In terms of measurement, four basic parameters are of key importance: Total inorganic carbon (TIC, TCO2 or CT) , Total alkalinity (TALK or AT), pH, and pCO2. Measuring any two of these parameters allows for the determination of a wide range of pH-dependent species (including the above mentioned species). This balance can be changed by a number of processes. For example, the air-sea flux of CO2, the dissolution/precipitation of CaCO3, or biological activity such as photosynthesis/respiration. Each of these has different effects on each of the four basic parameters, and together they exert strong influences on global cycles. It is important to note, the net and local charge of the oceans remains neutral during any chemical process.

Carbon in the biosphere

Carbon in the oceans

Inorganic carbon, that is, carbon compounds with no carbon-carbon or carbon-hydrogen bonds, is important in its reactions within water. This carbon exchange becomes important in controlling pH in the ocean and can also vary as a source or sink for carbon. Carbon is readily exchanged between the atmosphere and ocean. In regions of oceanic upwelling, carbon is released to the atmosphere. Conversely, regions of down welling transfer carbon (CO2) from the atmosphere to the ocean. When CO2 enters the ocean, carbonic acid is formed: CO2 + H2O <—> H2CO3

This reaction has a forward and reverse rate; that is it achieves a chemical equilibrium.

Another reaction important in controlling oceanic pH levels is the release of hydrogen ions and bicarbonate. This reaction controls large changes in pH: H2CO3 <—> H+ + HCO3

Models of the carbon cycle can be incorporated into global climate models, so that the interactive response of the oceans and biosphere on future CO2 levels can be modeled. There are considerable uncertainties in this, both in the physical and biogeochemical submodels (especially the latter). Such models typically show that there is a positive feedback between temperature and CO2. For example, Zeng et al. (2004) found that, in their model, including a coupled carbon cycle increases atmospheric CO2 by about 90 ppmv at 2100 (over that predicted in models with non-interactive carbon cycles), leading to an extra 0.6°C of warming (which, in turn, may lead to even greater atmospheric CO2).

The carbon cycle and climate

Carbon dioxide and methane are two carbon compounds that act as greenhouse gases in Earth's atmosphere, insulating the planet and making it a comfortable place for organisms to survive.

The carbon cycle responds to perturbations through a series of feedbacks so that temperatures never get too hot or too cold, within certain bounds. For example, if CO2 outgassing from volcanoes and mid-ocean ridges increases as a result of increased tectonic activity, atmospheric temperatures will rise. Rising temperatures and increased amounts of dissolved CO2 will result in increased rates of weathering of crustal rocks, which will use up the surplus CO2, decrease atmospheric CO2 levels, and bring temperatures back down. On the other hand, if global cooling occurred, weathering would slow down and CO2 would build up in the atmosphere and temperatures would rise again.

The recent debate about anthropogenic (human-induced) climate change has been centered around the release of thousands of tons of carbon dioxide from the burning of fossil fuels and its effect on global climate. Some scientists, using carbon cycle climate models, argue that with the "business as usual" scenario, atmospheric temperatures will rise over the next century (Cox et al. 2000). Other studies suggest that ocean uptake of CO2 will slow because of increased stratification of the ocean (less deep mixing) (Sarmiento et al. 1998). In addition, increased global temperatures would warm the oceans, decreasing the solubility of CO2 in ocean water. All of these factors are considered to cause a build up of CO2 in the atmosphere.

The reason for the concern over anthropogenic climate warming is the possibility that the burning of fossil fuels is releasing carbon into the atmosphere at a rate much faster than the Earth can respond to, to equilibrate and bring conditions back into a steady state, causing climate to possibly react violently at times—not only global temperatures, but increasing storm frequency and intensity. Of course, this scenario remains controversial. In terms of the global warming theory itself, there are other scientists and climatologists that maintain that (1) current fluctuations of global temperatures remain within the normal range of changes over geologic time, or (2) that global temperatures are increasing, albeit slightly, but such changes cannot conclusively be tied to anthropogenic sources or burning of fossil fuels. Other scientists challenge that although the issue remains controversial, a prudent course of action would be to practice the Precautionary Principle that if the consequences of an action are unknown, but are judged to have some potential for major or irreversible negative consequences, then it is better to avoid that action. (Of course, the avoidance of that action might also have potential negative consequences.)

Controversy within science is not uncommon. Clearly, resolution of this important issue will require not only seeking additional hard data, but a willingness of all parties to have an open mind and maintain integrity in accurately presenting and assessing the data collected, and its strengths and weaknesses, versus interpreting everything through the prism of a political, commercial, or environmental agenda.

Retrieved from https://www.newworldencyclopedia.org/p/index.php?title=Carbon_cycle&oldid=1002601
Categories:
This page was last edited on 10 January 2017, at 20:38.
Content is available under Creative Commons Attribution/Share-Alike License; additional terms may apply. See Terms of Use for details.