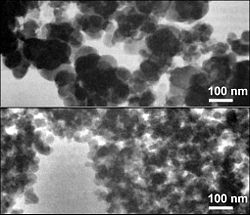 Image of carbon black taken with a transmission electron microscope.

Carbon black is a material produced by the incomplete combustion of heavy petroleum products such as FCC tar, coal tar, ethylene cracking tar, and a small amount from vegetable oil. Carbon black is a form of amorphous carbon that has a high surface area to volume ratio, and as such it is one of the first nanomaterials to find common use, although its surface area to volume ratio is low compared to activated carbon.

Carbon black is similar to soot but with a much higher surface area to volume ratio. It is used as a pigment and reinforcement in rubber and plastic products.

The most common use (70 percent) of carbon black is as a pigment and reinforcing phase in automobile tires. Carbon black also helps conduct heat away from the tread and belt area of the tire, reducing thermal damage and increasing tire life. Carbon black particles are also employed in some radar absorbent materials and in printer toner.

Total production is about 8.1 million tonnes (2006). About 20 percent of world production goes into belts, hoses, and other non-tire rubber goods. The balance is mainly used as a pigment in inks, coatings and plastics.

Carbon black from vegetable origin is used as a food coloring, in Europe known as additive E153.

The highest volume use of carbon black is as a reinforcing filler in rubber products, especially tires. While a pure gum vulcanizate of styrene-butadiene has a tensile strength of no more than 2.5 MPa, and almost nonexistent abrasion resistance, compounding it with 50% of its weight of carbon black improves its tensile strength and wear resistance as shown in the below table.

Practically all rubber products where tensile and abrasion wear properties are crucial use carbon black, so they are black in color. Where physical properties are important but colors other than black are desired, such as white tennis shoes, precipitated or fused silica is a decent competitor to carbon black in reinforcing ability. Silica-based fillers are also gaining market share in automotive tires because they provide better trade-off for fuel efficiency and wet handling due to a lower rolling loss compared to carbon black-filled tires. Traditionally silica fillers had worse abrasion wear properties, but the technology has gradually improved to where they can match carbon black abrasion performance.

Carbon black (Colour Index International, PBL-7) is the name of a common black pigment, traditionally produced from charring organic materials such as wood or bone. It consists of pure elemental carbon, and it appears black because it reflects almost no light in the visible part of the spectrum. It is known by a variety of names, each of which reflects a traditional method for producing carbon black:

Newer methods of producing carbon black have superseded these traditional sources, although some materials are still produced using traditional methods. For artisanal purposes, it is very useful.

All carbon blacks have chemisorbed oxygen complexes (that is, carboxylic, quinonic, lactonic, phenolic groups and others) on their surfaces to varying degrees depending on the conditions of manufacture. These surface oxygen groups are collectively referred to as volatile content. It is also known to be a non-conductive material due to its volatile content.

The coatings and inks industries prefer grades of carbon black that are acid oxidized. Acid is sprayed in high temperature dryers during the manufacturing process to change the inherent surface chemistry of the black. The amount of chemically-bonded oxygen on the surface area of the black is increased to enhance performance characteristics.

The current International Agency for Research on Cancer (IARC) evaluation is that, "Carbon black is possibly carcinogenic to humans (Group 2B)." Short-term exposure to high concentrations of carbon black dust may produce discomfort to the upper respiratory tract, through mechanical irritation.

Retrieved from https://www.newworldencyclopedia.org/p/index.php?title=Carbon_black&oldid=1002600
Categories:
Hidden category:
This page was last edited on 10 January 2017, at 20:37.
Content is available under Creative Commons Attribution/Share-Alike License; additional terms may apply. See Terms of Use for details.