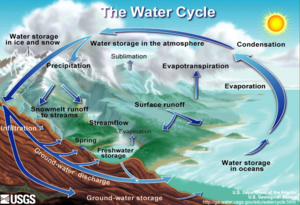 The movement of water around, over, and through the Earth is called the water cycle, a key process of the hydrosphere.

In physical geography, the term hydrosphere (Greek hydro means "water") describes the collective mass of water found on, under, and over a planet's surface. The Earth's hydrosphere consists chiefly of the oceans, but technically includes clouds, inland seas, lakes, rivers, and underground waters.

The abundance of water on Earth is a unique feature that distinguishes our "blue planet" from others in the solar system. Approximately 70.8 percent of the Earth is covered by water and only 29.2 percent is terra firma. The average depth of the Earth's oceans is 3,794 m (12,447 ft)—more than five times the average height of the continents. The mass of the oceans is approximately 1.35 × 1018 tons, or about 1/4400 of the total mass of the Earth.

The hydrosphere plays a key role in the development and sustenance of life. It is thought that the earliest living organisms probably emerged in a watery soup. In addition, each human life begins in the watery environment of its mother's womb, our cells and tissues are mostly water, and most of the chemical reactions that are part of life's processes take place in water.

There are several theories regarding the formation of the Earth's hydrosphere. This planet contains proportionately more surface water than comparable bodies in the inner solar system. Outgassing of water from the Earth's interior is not sufficient to explain the quantity of water.

One hypothesis that has gained popularity among scientists is that the early Earth was subjected to a period of bombardment by comets and water-rich asteroids. Much of the water on the surface today is thought to have originated from the outer parts of the solar system, such as from objects that arrived from beyond Neptune.

During the history of Earth, there have been a series of periods in which a significant portion of the hydrosphere was locked up in the form of glacial ice. It has even been hypothesized that during the Cryogenian period, this sea ice extended all the way to the equator (see Snowball Earth).

It is currently believed that four major ice ages have taken place during our planet's history. The current ice age began about 4 × 107 years ago, and gained in intensity during the Pleistocene. The most recent withdrawal of ice sheets occurred only 10,000 years ago.

All currently recognized forms of life rely on an active hydrosphere. All organic chemistry indicative of life occurs with water as its solvent. The water cycle in the Earth's hydrosphere allows for the purification of salt water into freshwater. The action of both evaporation and wetland swamps serves to remove a large portion of atmospheric pollutants from the atmosphere (i.e. acid rain). Through this process, the water cycle purifies the gaseous atmosphere. Although most life on the planet exists in the saltwater oceans, humans are particularly interested in the hydrosphere because it provides the fresh water we depend upon.

The search for life on other celestial bodies in our solar system is focused on first locating water. The hydrospheres of other planetary bodies are also the focus of research, to find places that humans can inhabit without having to transport all their water with them.

Scientists estimate that in approximately 5 × 109 years, the Sun will have exhausted the supply of hydrogen in its core and will evolve into a supergiant. The outer atmosphere will expand significantly, and planet Earth will lie within the Sun's photosphere (the part of the Sun that is not transparent to light). During this process, the surface temperature will rise well above the boiling point of water, and all water on the Earth's surface will evaporate.

The water cycle (or hydrologic cycle) describes the methods of transport for water in the hydrosphere. This cycle includes water beneath the Earth's surface and in rocks (lithosphere), the water in plants and animals (biosphere), the water covering the surface of the planet in liquid and solid forms, and the water in the atmosphere in the form of water vapor, clouds, and precipitation. Movement of water within the hydrosphere is described by the hydrologic cycle. It is easy to see this motion in rivers and streams, but it is harder to tell that there is this motion in lakes and ponds.

A thick hydrosphere is thought to exist around the Jovian moon, Europa. The outer layer of this hydrosphere is almost entirely frozen, but current models predict that there is an ocean up to 100 kilometers in depth underneath the ice. This ocean remains in a liquid form due to tidal flexing of the moon in its orbit around Jupiter.

It has been suggested that another Jovian moon, Ganymede, may also possess a sub-surface ocean. The ice covering, however, is expected to be thicker on Ganymede than on Europa.