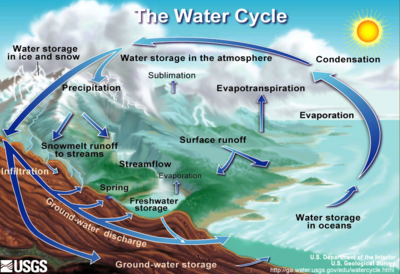 The movement of water around, over, and through the Earth is called the water cycle.

The water cycle, or the hydrologic cycle, is the continuous circulation of water within the Earth's hydrosphere. It involves the movement of water into and out of various reservoirs, including the atmosphere, land, surface water, and groundwater. This cycle is driven by radiation from the Sun. The movement of water within the water cycle is the subject of the field of hydrology.

The water moves from one reservoir to another, such as from river to ocean, or from the ocean to the atmosphere, by the physical processes of evaporation, condensation, precipitation, infiltration, runoff, and subsurface flow. In so doing, the water goes through different phases: liquid, solid, and gas.

The water cycle figures significantly in the maintenance of life and ecosystems on Earth. Even as water in each reservoir plays an important role, the water cycle brings added significance to the presence of water on our planet. By transferring water from one reservoir to another, the water cycle purifies water, replenishes the land with freshwater, and transports minerals to different parts of the globe. It is also involved in reshaping the geological features of the Earth, through such processes as erosion and sedimentation. In addition, as the water cycle involves heat exchange, it exerts an influence on climate as well.

Movement of water within the water cycle

There is no definable start or finish to the water cycle. Water molecules move continuously among different compartments, or reservoirs, of the Earth's hydrosphere, by different physical processes. Water evaporates from the oceans, forms clouds, which precipitate and the water falls back to Earth. However, water does not necessarily cycle through each compartment in order. Before reaching the ocean, water may have evaporated, condensed, precipitated, and become runoff multiple times.

Explanation of the water cycle 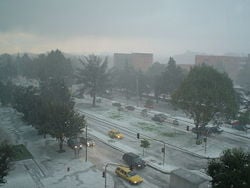 Hailstorms, such as this one in Bogotá, Columbia, are a product of the precipitation process.

Less fundamental processes involved in the water cycle are:

The adjacent table contains the amount of water that falls as precipitation or rises as evaporation, for both the land and oceans. The runoff and groundwater discharge from the land to the oceans is also included. From the law of conservation of mass, whatever water moves into a reservoir, on average, the same volume must leave. For example, 107 thousand cubic kilometers (107 × 10³ km³) of water falls on land each year as precipitation. This is equal to the sum of the evaporation (71 × 10³ km³/year) and runoff (36 × 10³ km³/year) of water from the land.

Water that cycles between the land and the atmosphere in a fixed area is referred to as moisture recycling.

In the context of the water cycle, a reservoir represents a region or zone where water is stored at a certain stage of the water cycle. The largest reservoir is the collection of oceans, accounting for 97 percent of the Earth's water. The next largest quantity (2 percent) is stored in solid form in the ice caps and glaciers. The water contained within all living organisms represents the smallest reservoir. Freshwater reservoirs, particularly those available for human use, are important water resources.

The residence time is a measure of the average time that water will spend in a reservoir. It needs to be understood that some of the water will spend much less time than average, and some, much more. Groundwater can spend over 10,000 years beneath Earth's surface before leaving. Particularly old groundwater is called fossil water. Water stored in the soil remains there very briefly, because it is spread thinly across the Earth, and is readily lost by evaporation, transpiration, stream flow, or groundwater recharge. After evaporating, water remains in the atmosphere for an average of about nine days before condensing and falling to the Earth as precipitation.

(See the adjacent table for residence times for other reservoirs.)

Residence times can be estimated in two ways. The more common method relies on the principle of conservation of mass, and may be expressed by the following equation:

An alternative method, gaining in popularity particularly for dating groundwater, is the use of isotopic techniques. This is done in the subfield of isotope hydrology.

Example: Calculating the residence time of the oceans

The water cycle is powered by solar energy. About 86 percent of global evaporation occurs from the oceans, reducing their temperature through the process of evaporation. Without the cooling effect of evaporation, the greenhouse effect would lead to a much higher surface temperature—an estimated 67° C—and a hotter planet [4].

Most of the solar energy warms tropical seas. After evaporating, water vapor rises into the atmosphere and is carried away by winds. Most of the water vapor condenses as rain in what is called the intertropical convergence zone (ITCZ), a low-pressure belt around the equator. This condensation releases latent heat that warms the air. This process, in turn, drives atmospheric circulation.

Changes in the water cycle

Over the past century, the water cycle has become more intense [5], as the rates of evaporation and precipitation have increased. It is thought that this is an outcome global warming, as higher temperatures increase the rate of evaporation.

Glacial retreat is also an example of a changing water cycle, where the supply of water to glaciers from precipitation cannot keep up with the loss of water from melting and sublimation. Glacial retreat since 1850 has been extensive.

Human activities that alter the water cycle include:

The water cycle is a biogeochemical cycle. Other notable cycles are the carbon cycle and nitrogen cycle.

As water flows over and beneath the Earth, it picks up and transports soil and other sediment, mineral salt and other dissolved chemicals, and pollutants. The oceans are saline because mineral salts are transported from the land by water runoff, but the salts remain in the oceans when water evaporates.

Retrieved from https://www.newworldencyclopedia.org/p/index.php?title=Water_cycle&oldid=1037916
Categories:
This page was last edited on 8 June 2020, at 00:11.
Content is available under Creative Commons Attribution/Share-Alike License; additional terms may apply. See Terms of Use for details.