Hail is precipitation that falls as hailstones, which are balls or irregular lumps of ice typically measuring between five and 50 millimeters (0.2 - 2 inches) in diameter, and with even larger stones coming from severe thunderstorms. Hail is always produced by cumulonimbi (thunderclouds), usually at the front of the storm system. Hailstones comprise multiple layers of transparent ice or layers alternating between transparent and translucent ice, with each layer usually being at least one mm (0.04 in) thick. Small hailstones may be less than five mm (0.2 in) in diameter, but even they are layered and can be irregular and clumped together. Ice pellets, which are another form of precipitation, are also ice chunks falling from the sky, but ice pellets, unlike hailstones, have no layers. Severe hailstorms have led to enormous loss of life and damage to property. 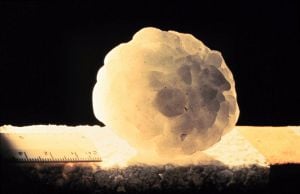 A large hailstone, about six centimeters in diameter.

If the hailstones grow large enough, latent heat released by further freezing may melt their outer shell. The growth that follows, usually called wet growth, is more efficient because the liquid outer shell allows the stone to accrete other smaller hailstones in addition to supercooled droplets. All this process is ongoing under the influence of the updrafts and down drafts, which leads to the hail growing increasingly larger until it becomes too heavy to be supported by the storm's updraft and falls out of the cloud.

Cutting a hailstone in half reveals a series of concentric rings, like those of an onion. These rings record the total number of times the hailstone had traveled to the top of the storm before falling to the ground. 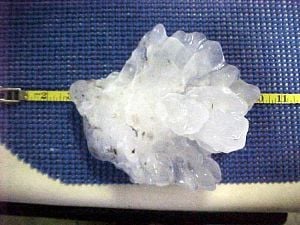 Hail forms in strong thunderstorm clouds, particularly those with intense updrafts, high liquid water content, great vertical extent, large water droplets, and with a good portion of the cloud layer being below the freezing temperature of water (0 °C (32 °F)). The growth rate is maximized at about -13 °C (9 °F), and becomes vanishingly small much below -30 °C (-22 °F) as supercooled water droplets become rare. For this reason, hail is most common in mid-latitudes during early summer where surface temperatures are warm enough to promote the instability associated with strong thunderstorms, but the upper atmosphere is still cool enough to support ice. Accordingly, hail is actually less common in the tropics despite a much higher frequency of thunderstorms than in the mid-latitudes, because the atmosphere over the tropics tends to be warmer over a much greater depth. Also, entrainment of dry air into strong thunderstorms over continents can increase the frequency of hail by promoting evaporational cooling, which lowers the freezing level of thunderstorm clouds giving hail a larger volume to grow in.

Hail is also much more common along mountain ranges because mountains force horizontal winds upward in a process known as orographic lifting, thereby intensifying the thunderstorm updrafts and making hail more likely. One of the most notorious regions for large hail is northern India and Bangladesh, which have reported more hail-related deaths than anywhere else in the world and also some of the largest hailstones ever measured. Mainland China is also notorious for killer hailstorms. Certain locations in North America (such as the area around Calgary, Alberta) have gained the nickname "Hailstorm Alley" among meteorologists for the frequency of hailstorms and their severity.[1] 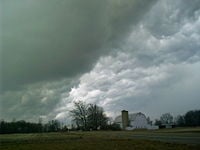 Hailstones, while most commonly only several millimeters (a few tenths of an inch) in diameter, can sometimes grow to 15 centimeters (5.9 inches) and weigh more than half a kilogram (1.1 pounds)[2]. Pea or golfball-sized hailstones are not uncommon in severe storms. Hail can do serious damage, notably to automobiles, skylights, glass-roofed structures, and most commonly, farmers' crops. Rarely, massive hailstones have been known to cause concussions or fatal head trauma. Sometimes, hail-producing clouds are identifiable by their green coloration.[3][4] 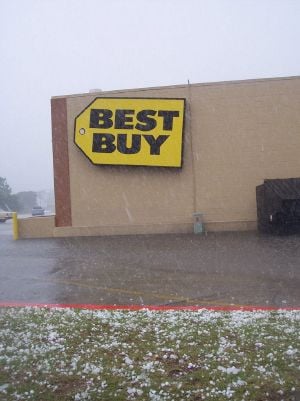