Malacostraca is a large and diverse taxon (generally class, but sometimes subclass or order) of marine, freshwater, and terrestrial crustaceans, including many of the most familiar crustaceans, such as crabs, lobsters, shrimps, which are characterized by a maximum of 19 pairs of appendages, as well as trunk limbs that are sharply differentiated into a thoracic series and an abdominal series. Other familiar members of the Malacostraca are the stomatopods (mantis shrimp) and euphausiids (krill), as well as the amphipods, and the only substantial group of land-based crustaceans, the isopods (woodlice and related species). With more than 22,000 members, this group represents two thirds of all crustacean species and contains all the larger forms. 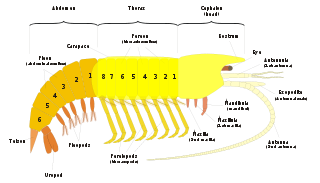 As crustaceans, members of Malacostraca are characterized by by having branched (biramous) appendages, an exoskeleton made up of chitin and calcium, two pairs of antennae that extend in front of the mouth, and paired appendages that act like jaws, with three pairs of biting mouthparts. They share with other arthropods the possession of a segmented body, a pair of jointed appendages on each segment, and a hard exoskeleton that must be periodically shed for growth.

Members of Malacostraca are united by generally having a maximum of 19 pairs of appendages, and by having trunk limbs differentiated into an abdominal series and thoracic series, with the former having six pairs and the later eight pairs of limbs. Typical characteristics include:

However, this is a very diverse group. Although the term Malacostraca comes from the Greek for "soft shell," the shell of different species may be large, small, or absent. Likewise, the abdomen may be long or short, and the eyes may show different forms, being on movable stalks or sessile. 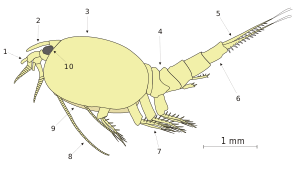 Eumalacostraca. The subclass Eumalacostraca (Greek: "True soft shell") contains almost all living malacostracans. Eumalacostracans have 19 segments (5 cephalic, 8 thoracic, 6 abdominal). The thoracic limbs are jointed and used for swimming or walking. The common ancestor is thought to have had a carapace, and most living species possess one, but it has been lost in some subgroups.

Phyllocarida. The subclass Phyllocarida has one extant order, Leptostraca. These are typically small, marine crustaceans, generally 5 to 15 millimeters long (Lopretto 2005). They possess a head with stalked compound eyes, two pairs of antennae (one biramous, one uniramous) and a pair of mandibles but no maxilliped (Lowry 1999). The carapace is large and comprises two valves which cover the head and the thorax, including most of the thoracic appendages, and houses as a brood pouch for the developing embryos. The abdomen has eight segments, six of which bear pleopods, and a pair of caudal furcae, which may be homologous to uropods of other crustaceans (Knopf et al. 2006). Members of this subclass occur throughout the world's oceans and are usually considered to be filter-feeders.

Hoplocarida. The subclass Hoplocarida includes the extant order Stomatopoda. Stomatopods, known by the common name of mantis shrimp, are marine crustaceans. They are neither shrimp nor mantids, but receive their name purely from the physical resemblance to both the terrestrial praying mantis and the shrimp. They may reach 30 centimeters (12 inches) in length, although exceptional cases of up to 38 centimeters have been recorded (Gonser 2003). The carapace of mantis shrimp covers only the rear part of the head and the first three segments of the thorax. Mantis shrimp sport powerful claws that they use to attack and kill prey by spearing, stunning, or dismemberment. These aggressive and typically solitary sea creatures spend most of their time hiding in rock formations or burrowing intricate passageways in the sea-bed. They either wait for prey to chance upon them or, unlike most crustaceans, actually hunt, chase, and kill living prey. They rarely exit their homes except to feed and relocate, and can be diurnal, nocturnal or crepuscular, depending on the species. Most species live in tropical and subtropical seas (Indian and Pacific Oceans between eastern Africa and Hawaii), although some live in temperate seas.

Martin and Davis (2001) present the following classification of living malacostracans into orders, to which extinct orders have been added, indicated by †. 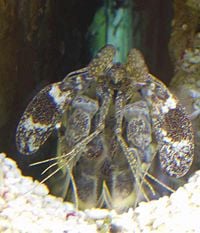 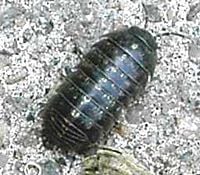 The first malacostracans appeared in the Cambrian.

Retrieved from https://www.newworldencyclopedia.org/p/index.php?title=Malacostraca&oldid=861127
Categories:
Hidden category:
This page was last edited on 21 November 2008, at 16:45.
Content is available under Creative Commons Attribution/Share-Alike License; additional terms may apply. See Terms of Use for details.