Isopoda is a diverse and widely distributed order of aquatic and terrestrial malacostracan crustaceans, characterized by a generally small, dorsoventrally flattened body, a pair of maxillipeds, two large antennae and one small vestigial pair, a cephalic shield rather than a carapace, unstalked compound eyes, and many legs (except in the parasitic forms). With about 10,000 species placed into nine or ten suborders, Isopoda is very diverse, and includes marine, freshwater, terrestrial, and parasitic forms. The presence of terrestrial forms, such as the familiar pillbugs (or pill bugs), woodlice, and sowbugs, is atypical for crustaceans.

Found worldwide and in many kinds of habitats—from the deep ocean to coastal regions to freshwater environments, from grasslands to deserts, and even attached to other organisms—isopods play a key role in food chains. Consuming a diet that is very diverse as a taxon, including algal, plant, animal, and fungal material and detritus, isopods provide food for spiders, centipedes, amphibians, birds, and fish, among others.

Isopods also add to the diversity of nature that adds to the human experience, with terrestrial forms such as pillbugs being particularly encountered. The ability of many terrestrial forms (and some aquatic) to roll into a ball, as seen in the pillbugs, is a particularly well-known trait. In some areas, the giant isopods of genus Bathynomus, such as B. giganteus, are even consumed in restaurants.

The isopods (order Isopoda) are part of the Malacostraca, a class (or subclass) of crustaceans that includes such familiar members as crabs, lobsters, and shrimps. Malacostracans are characterized by having trunk limbs differentiated into an abdominal series and thoracic series and by having a maximum of 19 pairs of appendages.

Members of the order Isopoda are typically flat or at least somewhat dorsally ventrally flattened. As with other crustaceans, they have three distinct body parts: Head (or cephalon), thorax (or pereon), and abdomen (or pleon), but the cephalon is fused with the first segment of the thorax. The head of isopods have unstalked compound eyes, mouth, one pair of antennulae (first antenna, vestigial in isopods), one pair of large antennae, and four pairs of mouthparts (mandibles, maxillulae, maxillae, and maxillipeds). Maxillipeds are appendages modified to function as mouthparts and appear as on the posterior and ventral edge of the cephalon but actually are the first thoracic appendages (Keable et al. 2003; Mertz 2004). 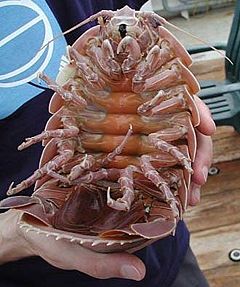 Species that are non-parasitic have at least 14 walking legs (pereopods) on the thorax, one pair per each of the seven segments (Mertz 2004). (The first thoracic segment, with maxillipeds, gives a total of eight thoracic segments.) All thoracic legs are similar (except the maxillipeds) and all abdominal legs are similar (Russell-Hunter 1969). The legs of the parasitic forms are either absent or developed only one one side of the body (Mertz 2004). They lack a carapace to protect the internal organs but do have a cephalic shield (Mertz 2004). Isopods have paired appendages at the end of the abdomen called uropods.

Isopods are generally small, ranging from about 5 to 15 millimeters (0.2—0.6 inches) (Mertz 2004). However, there also are species that are considerably smaller, about 0.5 millimeters (0.02 inches) and larger, reaching 50 centimeters (19.7 inches) in the case of Bathynomus giganteus) (Mertz 2004). Isopods vary in color from dark gray to white, with and without pattern.

There are about 4,500 known marine and estuarine species, about 500 freshwater species, and approximately 4,000 terrestrial species. These commonly are arranged into nine or ten suborders, with five of these suborders predominant: Asellota (marine and freshwater forms), Epicaridea (parasitic), Flabellifera (marine or estuarine forms, including some parasitic), Oniscidea (many of the terrestrial forms, including pillbugs and woodlice), and Valvifera (marine forms) (Mertz 2004).

The isopods are an ancient group with fossils known more than 300 million years ago from the Carboniferous (suborder Phreatoicidea, family Paleophreatoicidae), with these only differing slightly from modern southern hemisphere freshwater phreatoicideans. 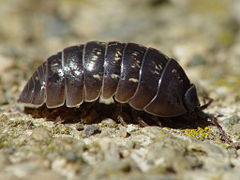 A species of pillbug, Armadillidium vulgare

Isopoda is one of the most diverse orders of crustaceans, with many species living in a wide variety of environments. They have a worldwide distribution but are most common in marine waters. Unlike most crustaceans, isopods are successful on land (suborder Oniscidea, woodlice, which also includes sea slaters). There are also a number of parasitic forms.

Terrestrial forms may be found in many environments, including deserts, but do require damp or wet habitats, as isopods are gill breathers. They are often found under logs or rotting wood. Pillbugs (families Armadillididae and Armadillidae) are common to grasslands and more arid habitats, and sowbugs (families Oniscidae and Prcellionidae) are common to forests and semiarid areas (Mertz 2004).

Marine forms often are found in shallow waters along the coastline, but many species are also found in the deep sea. Freshwater species tend to inhabit burrows made in the sediment, with one species known to burrow into the periodically flooding aerial roots of mangrove trees. Some species exist in wetland areas between terrestrial and aquatic habitats (Mertz 2004).

Many species, particularly in the suborder Epicaridea, are parasitic on other crustaceans (barnacles, crabs, shrimps) (Mertz 2004). The fish-louse (Aega sp.) is parasitic on fish, and has piercing mouth parts and hooks on the thoracic limbs; Adults members of the genus Bopyrus are permanently fixed parasites on the gills of decapod crustaceans (Russell-Hunter 1969). Several parasitic species within the genus Cymothoa are commonly known as "tongue-biters" for their habit of nibbling off fishes' tongues and attaching themselves to the floor of the host's mouth.

Isopods are poor swimmers, being adapted as scavengers and bottom crawlers (Russell-Hunter 1969).

One of the more well-known behaviors of isopods is the characteristic of members of some terrestrial species to roll into a ball (conglobation), allowing them to use their armor-like dorsal surface as protection from predators and from loss of water. Some littorial and intertidal species also have this ability. Many species cannot right themselves if placed on their back, but sowbugs (which cannot conglobate) can easily right themselves (Mertz 2004).

Overall, the isopod diet is quite varied, from plant tissues (live and dead), animals (live and dead), fungi, and fecal matter. Terrestrial forms (pillbugs or sowbugs) are mostly detritus feeders on decaying organic matter, but do eat fruits, live vegetation, fungi, and their own feces and the feces of other organisms. Marine forms feed largely on algae, diatoms, live vegetation, vegetative detritus, and wood, and some eat the flesh of dead animals (Mertz 2004).

Predators of terrestrial forms include spiders, centipedes, amphibians, and birds, while predators of marine forms include mainly fishes. Species are particularly vulnerable during the time of molting (Mertz 2004).

Separate sexes are typical in isopods, with male transferring sperm while on the back of the female and bending his abdomen to her ventral gonopores. Only during a maturation molt, when the exoskeleton is being shed, is the female fertile and able to mate. Females of many species can store the sperm for many months. The eggs and young develop in a brood pouch. The juveniles, known as mancas, are nearly identical to the adults but lack the last pair of thoracic legs. Some isopods are protandric hermaphrodites, switching to female from male as they develop (Mertz 2004).

Members of the genus Bopyrus appears determined only upon arrival at the gills of its host fish, with the first specimen becoming a female and later arriving individuals becoming males. A young female removed from a gill and placed into a gill-chamber with an existing fully adult female will have retarded and reversed sexual development, eventually becoming a male (Russell-Hunter 1969).

Retrieved from https://www.newworldencyclopedia.org/p/index.php?title=Isopoda&oldid=1009582
Categories:
Hidden category:
This page was last edited on 7 March 2018, at 23:55.
Content is available under Creative Commons Attribution/Share-Alike License; additional terms may apply. See Terms of Use for details.