Antennae (singular antenna) are paired appendages connected to the anterior-most segments of arthropods. In crustaceans, they are present on the first two segments of the head, with the smaller pair known as antennules and the larger pair biramous (branched). All other arthropod groups, except chelicerates and proturans (which have none), have a single, uniramous pair of antennae, such as Myriapoda (millipedes, centipedes), Insecta (insects), and the extinct Trilobita (trilobites).

Arthropod antennae generally extend forward from the head. They are sensory organs, although the exact nature of what they sense and how they sense it is not the same in all groups, nor always clear. Functions may variously include sensing touch, air motion, heat, vibration (sound), and especially olfaction (smell) or gustation (taste).

The word antenna has also been used as a common metaphor, "spiritual antenna," in a variety of religious and spiritual disciplines, including Christianity and Buddhism. Just as antenna are sensory organs, spiritual antenna signify openness to a sixth sense, intuition, or spiritual reality.

Many crustaceans and insects can regenerate antennas, as well as legs and claws. 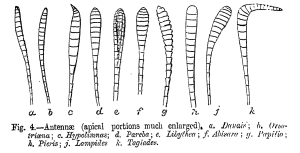 Antennal shape in the Lepidoptera from C. T. Bingham (1905)

Insects are distinguished from other arthropods by having three pairs of jointed legs; an abdomen that is divided into 11 segments and lacks any legs or wings; and a body separated into three parts (head, thorax, and abdomen). They have one pair of antennae on the head.

In insects, olfactory receptors on the antennae bind to odor molecules, including pheromones. The neurons that possess these receptors signal this binding by sending action potentials down their axons to the antennal lobe in the brain. From there, neurons in the antennal lobes connect to mushroom bodies that identify the odor. The sum of the electrical potentials of the antenna to a given odor can be measured using an electroantenogram.

The three basic segments of the typical insect antenna are the scape (base), the pedicel (stem), and finally the flagellum, which often comprises many units known as flagellomeres. (The number of flagellomeres can vary greatly, and is often of diagnostic importance.) True flagellomeres have a membranous articulation between them, but in many insects, especially the more primitive groups, the flagellum is entirely or partially composed of a flexible series of small annuli, which are not true flagellomeres. In many beetles and in the chalcidoid wasps, the apical flagellomeres form a club, and the collective term for the segments between the club and the antennal base is the funicle (or funiculus). For traditional reasons, in beetles it is the segments between the club and the scape, but in wasps, it is the segments between the club and the pedicel. In the groups with more uniform antennae (for example: Diplopoda), all segments are called antennomeres. Some groups have a simple or variously modified apical or subapical bristle called an arista (this may be especially well-developed in various Diptera).

Crustaceans are the group of arthropods that includes the familiar crabs, lobsters, shrimps, barnacles, copepods, krill, water fleas, and crayfish. Crustaceans are characterized by having branched (biramous) appendages, an exoskeleton made up of chitin and calcium, and paired appendages that act like jaws, with three pairs of biting mouthparts.

Crustaceans are also characterized by two pairs of antennae that extend in front of the mouth. The first pair are uniramous (single series of segments attached end-to-end) and are often referred to an antennules. The second pair are biramous, meaning that each antenna branches into two, and each branch consists of a series of segments attached end-to-end.

In most adults, the antenna are sensory organs, but they are used by the nauplius larva for both feeding and swimming. The peculiar structure of the second of the male anostracan allow it to be used to attach to a female as it swims in copulation (Hunter 1969). In some groups of crustaceans, such as the spiny lobsters and slipper lobsters, the second antennae are enlarged, while in others, such as crabs, the antennae are reduced in size.