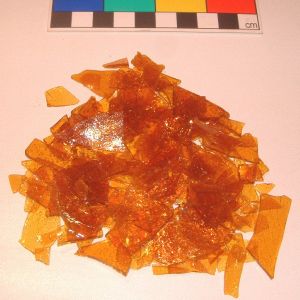 Shellac is the refined form of a resinous secretion of the tiny lac insect, which is used commercially in an alcohol solution as a wood sealer and finisher, floor polish, protective candy coating, and so forth. Lac is the name given to the actual secretion of the insect, and shellac technically is the refined lac in flake form. However, "shellac" also is used for the liquid, such as the thin shellac varnish used to finish wood, that is formed by dissolving refined lac flakes in alcohol.

The main, commercially cultivated species of lac insect is Kerria lacca (Laccifer lacca), which gathers in the thousands on branches of host trees, coating the branches with their resinous secretion, which is modified from tree sap. Humans have developed methods for harvesting and purifying the lac, and processing it into products as diverse as a primer coat on wood, a glazing agent on pills, a replacement for the natural wax of apples, and in dentistry, a molding agent used in making custom impression trays and a binding agent used in making partial dentures. In their life cycle, the lac insects manifest a total parental investment in their progeny, as the males and females die after fertilization and laying of the eggs.

Lac is the resinous secretion of a number of species of lac-producing insects. Lac insects belong to such genera as Metatachardia, Laccifer, Tachordiella, and others of the superfamily Coccoidea of the Homopera order; however, members of two families—Lacciferidae and Tachardinidae—appear to be more prominent in terms of lac secretion (ASB 2008).

Of the many species of lac insect, the one that is commercially cultured is Kerria lacca, which is also known by such synonyms as Laccifer lacca, Tachardia lacca, and Carteria lacca. Kerria lacca belongs to the lac insect family Kerriidae, one of some 28 families of scale insects and mealy bugs comprising a large group of about 8000 described species of plant sucking insects, a few of which produce similar natural products (for example, cochineal and crimson). Thousands of these tiny insects colonize branches of suitable host trees and secrete the resinous pigment.

As a member of the Homoptera order ("true bugs"), Kerria lacca is hemimetabolous. In other words, members of this species go through an incomplete metamorphosis, or simple metamorphosis, whereby the larvae resemble the adults somewhat, and their life cycle involves the three distinct stages of egg, nymph, and the adult stage, or imago—that is, there is no pupal stage characteristic of insects undergoing complete metamorphosis.

In Kerra lacca, the insect starts as a nymph that is only about 0.6 millimeters (3/128 inches) long (ASB 2008). It settles on a host plant gregariously and there may be on average 150 such larvae per square inch of twig (ASB 2008). The insects project protrusions into the tree, penetrating the bark, and suck up the sap, which is chemically altered in the insects' bodies (Bryk 2002). When exuded onto the tree branch, this secretion forms a hard covering. Larvae begin secreting this lac after a day or two of settlement. As the insects are in close proximity, the lac secretions from adjacent cells coalesce with each other and form a shell-like covering over the entire swarm (ASB 2008; Bryk 2002).

After the first molt, the male and female larvae lose their legs, antennae, and eyes, and after the third molt, the mouthparts in the male larvae become atrophied, the males stop feeding, and they fertilize with the female (ASB 2008). The females' lac output increases greatly after fertilization (Bryk 2002). The female may lay 1000 eggs before dying; after hatching, the new larva break through the crust and swarm out (Bryk 2002).

Kerria lacca is primarily cultured in India and Bangladesh on the plants Zizyphus mauritiana and Z. jujuba (ASB 2008). It is also cultivated in India on Dhak (Butea monosperma) and Kusum (Schleichera oleosa); in Thailand on the rain tree (Samanea saman) and the pigeon pea (Cajanus cajan); in China on the pigeon pea and Hibiscus species; and in Mexico on the Barbados nut (Jatropha curcas).

Workers cut the small coated branches of the host trees and send them to places to be refined, either by hand or mechanically (Bryk 2002). As a product, the coated branches, called sticklac, are the source of the coating of resin and wax, which is removed by a sequence of crushing and sieving. The sieved material is then repeatedly washed to remove insect parts and other soluble material, resulting then in the product known as seedlac. In this case, the prefix "seed" refers to the seedlac pellets' shape, which resembles seeds. Seedlac is the raw material for producing shellac, which is made from the seedlac by hand or mechanical equipment, the latter usually using a heat or solvent-based process (Bryk 2002).

The natural color of lac residue is greatly influenced by the sap consumed by the lac insect and the season of the harvest. Generally in the trade of seedlac there are two distinct colors: the orange Bysacki and the blonde Kushmi. When purified, the chemical takes the form of golden yellow or golden brown flakes. Bleaching may be used to remove the residual red color and give a clear shellac. Otherwise, the shellac remains orange-like after the refining process.

Shellac is offered for sale both in the flake form or dissolved in denatured alcohol, with the latter being more popular with the consumer (Bryk 2002).

Shellac refined for industrial purposes either retains its natural wax content or is refined wax-free by filtration.

Lac is produced in Assam and other parts of North-East India, Bangladesh, Myanmar, Thailand, Laos, Vietnam, parts of China, and also in Mexico.

Lac was originally cultivated as the source of a purple-red dye derived by soaking the lac bug secretions in water. The dye traditionally has been used for coloring silk, leather, and cosmetics (Bryk 2002). In the nineteenth century, craftsmen began to experiment with using the liquid shellac as a wood sealer and finisher. Demand for the product increased significantly as shellac became known as a quick-drying surface coating that yielded a tough finish (Bryk 2002). 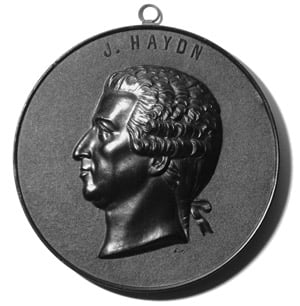 A decorative medal made in France in early twentieth century molded from shellac compound, the same used for phonograph records of the period.

A natural polymer, shellac is chemically similar to synthetic polymers and is considered a natural plastic. It becomes part of a molding compound when mixed with wood flour and molded under heat and pressure methods, so it is classified as a thermoplastic. But old moldings made of shellac and wood flour tend to become thermoset, that is, they suffer chemical reactions over time and are no longer fusible.

Shellac is soluble in alkaline solutions such as ammonia, sodium borate, sodium carbonate, and sodium hydroxide, and also in various organic solvents. When dissolved in alcohol—typically blends containing ethanol and methanol—shellac yields a coating of superior durability and hardness and is available in numerous grades.

Shellac is used in the traditional "French polish" method of finishing furniture, and fine viols and guitars. Because it is compatible with most other finishes, shellac also is used as a barrier or primer coat on wood to prevent the bleeding of resin or pigments into the final finish, or to prevent wood stain from blotching. Lightly tinted shellac preparations are also sold as paint primer. Shellac is best suited to this application because, although its durability against abrasives and many common solvents is not very good, it provides an excellent barrier against water vapor penetration. Shellac based primers are thus an effective sealant to control odors associated with fire damage.

In the late nineteenth and early twentieth centuries, shellac was particularly popular in the United States when houses were being built rapidly, given that shellac was an ideal wood finisher with its quick drying (Bryk 2002)

Shellac was used from mid-nineteenth century to produce small molded goods like picture frames, boxes, toilet articles, jewelery, inkwells, and even dental plates. Until the advent of Vinyl in 1938, phonograph records were pressed from shellac compounds. This use was common until the 1950s, and continued into the 1970s in some non-Western countries. Sheets of Braille were coated with shellac to help protect them from wear due to being read by hand. Shellac is used as a binder in Indian ink.

Shellac is edible and it is used as a glazing agent on pills and candies. Because of its alkaline properties, shellac-coated pills may be used for a timed enteric or colonic release. It is also used to replace the natural wax of the apple, which is removed during the cleaning process. When used for this purpose, it has the food additive E number E904. This coating may not be considered as vegetarian as it may, and probably does, contain crushed insects. In the tablet manufacture trade, it is sometimes referred to as "beetlejuice" for this reason. In some cases, shellac is known to cause allergies on contact, resulting in skin irritations (Le Coz et al. 2000).

Although advances in plastics have rendered shellac obsolete as a molding compound, it remains popular for a number of other uses. In dental technology, it is still occasionally used in the production of custom impression trays and (partial) denture production. It is used by many cyclists as a protective and decorative coating for their handlebar tape (OYB 2005). Shellac is used as a hard-drying adhesive for tubular cycle tires, particularly for track racing (Brandt 2001).

For some applications, a corn protein called zein is a competitive substitute.